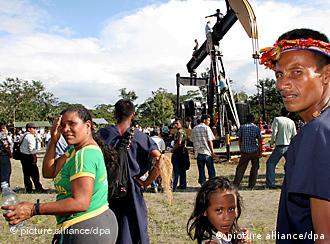 Defending sacred sights and the environment can land you in jail for being a terrorist, according to indigenous activists in Ecuador.

"There are about 200 cases against indigenous activists, campesinos, mextizos and other leaders," Pepe Acacho, Vice President of CONAIE, the Confederation of Indigenous Nationalities in Ecuador, told Deutsche Welle.

CONAIE is documenting the government's crackdown on dissent within indigenous and activist communities who are largely opposed to resource development projects, like gold mining, oil drilling and hydroelectric dam construction. 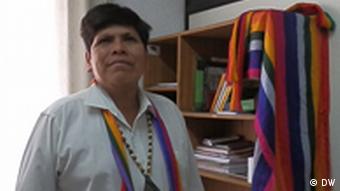 Is he a terrorist? Pepe Acacho opposes the government's plans to gain control over water

Communities who don't support such projects are actively organizing to stop them, like Pepe Acacho's community in the Amazon.

Acacho, who is also a Shuar leader, faces 16 years in prison for blockading the street during a demonstration against a proposed water law in 2009. The law would have ended collective management of water in indigenous communities, a centuries-old practice. Acacho said that he was arrested with 40 other protesters and charged with terrorism.

"It's political because I'm a leader who fights for and defends our collective rights, nature and our territory," Acacho said.

Carlos Perez is another activist charged with terrorism. An attorney of Kichwa heritage, Perez was arrested and charged in 2010 for protesting against a proposed gold mine at Quimsacocha, a protected forest near Cuenca in southern Ecuador. The land also has the headwaters to two rivers that provide water to half a million people in Cuenca and nearby farming villages.

"Over trials, over criminalization, arrests, prison, fears and threats, our fight goes on stronger than ever, with more rage and indignation," said Perez, stressing that water was simply not negotiable in the eyes of his indigenous community.

"Water is sacred. Water is our life." 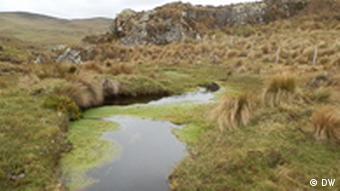 An open pit gold mine is planned here at Quimsacocha

The Ecuadorian government has given concessions to 'I Am Gold', a Canadian company that plans to mine for gold at Quimsacocha, an area in southern Ecuador which the Kichwa people consider sacred.

The 'Three Lakes' site in the region is the sacred destination for the Kichwa pilgrimage twice a year. There they pay homage to the Virgin of the Holy Water, at the largest of the pristine lakes.

The mining project in the region would impact the ancient Kichwa culture and traditions that have been linked to the land for centuries.

Ecuador's 'socialist' President Rafael Correra is not hesitating to make this trade-off, however. "We cannot live like beggars while we are sitting on a mountain of gold," he said on national television.

"Ecuador has great mineral potential. We cannot negate the development of our country for absurd irrational beliefs. We cannot do away with education and health."

Ecuador is looking to tap its mineral resources to boost the economy, and other countries, including China, are lining up to reap a share of the benefits.

Last month, China announced its plans to purchase the majority of Ecuador's aluminum and copper. Beijing also gave Ecuador a two-billion-dollar loan this past summer, with its eyes on the future exploitation of oil reserves in the Amazon.

The economic pressure makes it even more difficult for small, indigenous communities in the rural parts of Ecuador to gain an ear for their cause. 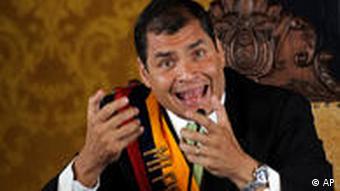 Getting the government to acknowledge their struggle is a difficult task.

The spokesperson at the President's Office, Patricio Eduardo Barriga, claims the terrorism charges against activists were justified.

"Carlos Perez and Pepe Acacho are political people. They are accused of terrorism because they violated our rights by closing access to the city," he said.

Activists base defense on new constitution

Activists are using the country's forward thinking 2008 constitution to defend their actions and stop resource extraction.

The constitution grants nature the right to exist and persist, it also grants rights to freedom of speech, and rights to prior and informed consent before resource development occurs on indigenous territory.

Some of the terrorist suspects are successful in their struggle to defend themselves. One activist, Donald Moncayo, President of the Santa Cruz community near Lago Agrio, defeated the sabotage and terrorism charges against him. "It was an attempt to silence me," Moncayo said.

According to his attorney, Pablo Fajardo, the government couldn't provide sufficient evidence that Moncayo was a terrorist. A pit of crude oil sits on land adjacent to Moncayo's family farm near Lago Agrio. He said Texaco dumped the waste products there over a decade ago.

His attorney Fajardo sued Texaco and its parent company Chevron for polluting several communities in Ecuador, and won in February 2011.

An appeal to Moncayo's case is pending. 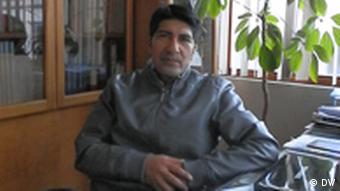 Passing on the fighting spirit

According to Carlos Perez from the Confederation of Indigenous Nationalities in Ecuador, judicial prosecutions will not stop indigenous groups to protect their sacred land and culture.

However long he or other leaders are put in prison, Perez said at his law office in Cuenca, "that will not put out the lit flame of the resistance."

Perez added that indigenous groups are ready to continue their struggle.

"The best inheritance we can pass on to our children is not a car, nor a house, nor a checkbook, a savings account or credit card - it is the dignity and rebelliousness we inherited from our grandparents."

Just as values collide over development, Ecuador's response to dissent will also define how this newly socialist country awakens to its possibilities, responsibilities and power.

Environment is more important than oil for Ecuador

Ecuador is looking for international support to prevent its Yasuní national park being turned from a paradise of biodiversity into a giant oil field. (27.05.2011)

Ecuador: Coaching Despite State of Emergency

An uprising by police brought Ecuador to the brink of a coup at the end of September. When the government temporarily took over all broadcasting frequencies, critics accused it of harming freedom of the press. (12.11.2010)