ECJ headscarf ruling and its consequences

The European Court of Justice ruled that religious symbols may be prohibited in the workplace. To avoid discrimination, the ruling encompasses all religious groups. Critics disagree with this view. 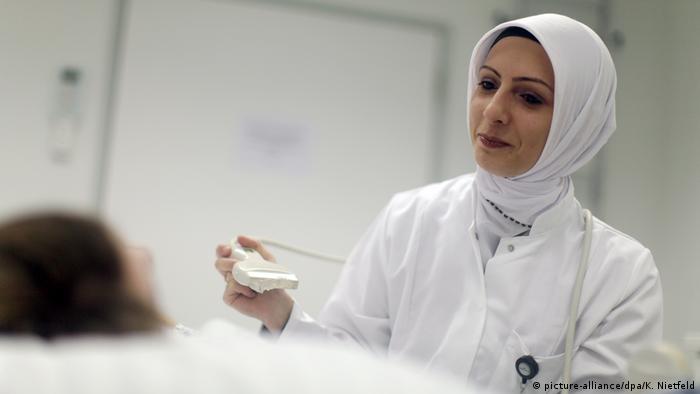 There are mixed feelings about the EU ruling on religious symbols - including headscarves – in the workplace. Is it discriminatory or not? The European Court of Justice (ECJ) has decided that employers may place a general ban on "political, philosophical or religious symbols" in the workplace and that this does not constitute direct discrimination.

Amnesty International contests this claim. "Today's disappointing rulings by the European Court of Justice give greater leeway to employers to discriminate against women – and men – on the grounds of religious belief."

A Belgian woman and a French woman took their cases to court. After three years of work as a receptionist in a Belgian security firm, Samira A. decided in 2006 that she would wear her headscarf to work and not just in her spare time, as she had in the past. The company told her this went against its work regulations, which generally prohibited any "political, philosophical or religious" symbols. Soon thereafter, Samira A. was fired and subsequently took her case to court.

In the case of the French software designer Asma B, there were no company regulations in 2008 when she was wearing a headscarf at a meeting with a client. When the client complained about the covering, Asma B.'s employer asked her to not wear a headscarf next time. She continued to wear her scarf, and as a result, she was dismissed.

Judges in Luxembourg said that a ban could not be issued just because a client did not like the headscarf. Furthermore, they stated that all employees in a company must be treated equally, regardless of their personal or religious beliefs.

A backdoor to discrimination

Nonetheless, rights group Amnesty International criticizes the ECJ for having opened a "backdoor to prejudice." "At a time when identity and appearance have become a political battleground, people need more protection against prejudice, not less." Hence, the human rights organization has tapped into the pulse of other activists. Islamic associations and the Protestant Church in Germany are also critical of the court's decision.

But European conservatives approve of the ruling, which apparently defends European values, says Manfred Weber, a conservative member of European parliament from Germany. He said it is right for "employers to be able to prohibit headscarves in the workplace in certain situations."

The ECJ ruling will also make it easier for German companies to prohibit "religious or ideological symbols," says Bernhard Frank from the Federal Anti-Discrimination Agency of Germany. Until now, women in the workplace have in principle been allowed to wear a headscarf. This right was established in 2005 in the General Equal Treatment Act, which is supposed to protect people from discrimination because of their ethnic origin or religion. These rights can, however, be restricted if an employer states "objective reasons" like work safety, jeopardizing company peace or possible damage to the business caused by customer complaints.

The right to religion

Employers do not have much leeway, says labor lawyer Manuela Beck. "The interpretation in Germany is very strict because practicing a religion is legally protected." She adds that the ECJ ruling will not change anything. Nonetheless, Beck lawyer admits, "There will surely be companies that overstep the mark."

In fact, on different occasions, German courts have already ruled for and against wearing headscarves. In 2002, a federal labor court ruled in favor of a department store saleswoman who had worn a hijab at work. In Germany, the individual states decide whether teachers are allowed to wear headscarves in class. In the states of Schleswig-Holstein or Rhineland-Palatinate, it is permitted to do so, whereas in Bavaria and Berlin, teachers cannot wear headscarves, kippahs or large crosses around their necks.

This is what employees of private companies can expect in the future. Franke from the Anti-Discrimination Agency does not want to speak of systematic discrimination. "The ECJ ruling relates to the European directive that prohibits discrimination on the grounds of religion or beliefs," he says. In practice, however, it could affect Muslim women or Sikhs, he admits. The reason is obvious as a cross can be worn under clothing and does not have to be very big. A hijab or Sikh turban is hard to hide but for many, it is an expression of the religious convictions that they do not want to deny.

The head of the Federal Anti-Discrimination Agency, Christine Lüders, has a clearer position than her colleague. She suggests employers should "carefully consider whether a headscarf should restrict their choice of staff." "For Muslim women who wear a headscarf, it could become even more difficult to enter the labor market in the future," says Lüders.

Authorities are embroiled in an intense headscarf debate in Bosnia-Herzegovina. Muslim women who work in courts and wear headscarves for religious reasons may not be able to do so in the future. (28.02.2016)