The European Central Bank has left interest rates unchanged and said it would not extend its massive bond-buying scheme further into 2017. Analysts say the bank needs to save some monetary firepower for a later meeting. 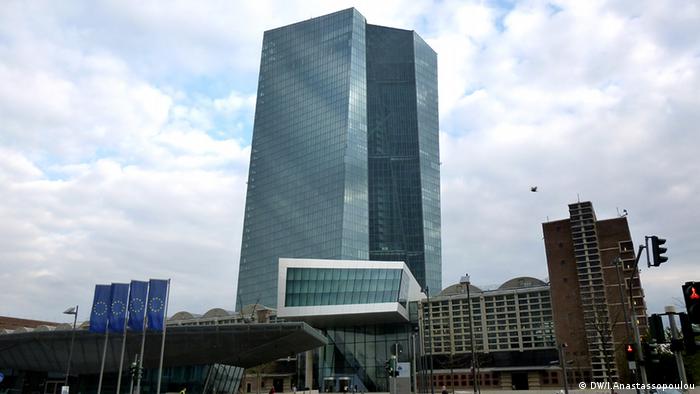 The ECB held its key refinancing rate at the record-low level of zero percent on Thursday, where it's been since March. It also left its deposit rate at minus 0.4 percent and its marginal lending rate at 0.25 percent.

The bank also promised to keep its 80 billion euro ($90.4 billion) monthly asset purchases in place until at least next March. ECB President Mario Draghi said the central bank for the eurozone left its options open for extending the program even further in case consumer prices keep failing to go up.

"The Governing Council tasked the relevant committees [with the ECB] to evaluate the options that ensure a smooth implementation of our purchase program," he told a news conference after the policy-making council meeting.

So far, the bank's decisions to offer free credit to banks, drop interest rates and print trillions of extra euros haven't had the desired effect of getting inflation to just under 2 percent. At 0.2 percent, inflation remains well below the ECB target and is likely to stay below that level until at least 2018.

"For the time being, the changes are not substantial to warrant a decision to act. We see that our monetary policy is effective," he said.

Prolonging the ECB purchases - which surpassed a total of one trillion euros this month - is controversial because it risks further distorting market prices and even running out of eligible bonds. The ECB has already had to stop purchases in Estonia and found no bonds to buy in Luxembourg last month.

With bond shortages likely to emerge early in the new year in Germany, where the Bundesbank must find around 10 billion euros of bonds to buy each month, the ECB will have to come to some decision on the design of the program by December.

The head of Germany's largest bank has warned of the "fatal consequences" of the European Central Bank's ultra-loose monetary policy. Low rates are hurting savers and retirees, he said. (24.08.2016)

Germany makes over a billion euros - from its debt

States borrowing money from investors normally pay interest on debts they pile up. But amid Brexit concerns, tumbling banks and slow economic growth, it's everything but business as usual as the German example shows. (01.08.2016)

Eurozone inflation back in positive territory

Consumer prices in the 19-member eurozone have gone up only slightly, but enough to reach positive territory again after months of below-zero inflation. It'll give the European Central Bank some breathing space. (30.06.2016)

Investors are now paying to own German bonds, as they flock towards safe havens amid Brexit fears and turbulent stock markets. The ECB's quantitative easing program further pushes down interest rates on sovereign debt. (13.07.2016)

The European Central Bank has delivered a surprise cut in interest rates. The move was accompanied by an announcement that it would also boost its large bond-buying program in a bid to kickstart the eurozone economy. (10.03.2016)

The choice is then between tweaking purchase rules or going for a bigger redesign.

The easiest options could include buying bonds yielding less than the bank's minus 0.4-percent deposit rate. But getting rid of this purchase requirement - which prohibits policymakers from buying the most expensive sovereign debt - would expose the eurozone’s central banks to heavy losses.

An alternative would be scrapping the rule that bond purchases should reflect the size of a member state’s economy. This would open the way for the ECB to buy more bonds from the most indebted countries, such as Italy and Spain.

Bigger changes could involve the purchase of new types of assets, like bank bonds, non-performing loans or in the extreme case, stocks.

Still, each of these changes would generate concern or even outright opposition from hawks such as Germany and the growing camp of moderates on the Governing Council, who worry about the unintended negative effects of the extraordinary stimulus.

Draghi's confirmation that an extension of the central bank's asset purchase program was not even discussed at the meeting sent stock markets down on Thursday, knocking Germany's DAX index half a percent lower on the day and pulling pan-European indices of blue chip companies down by around a quarter of a percent.

The ECB's inaction clearly disappointed investors, said Fawad Razqzada, technical analyst with Forex.com. "In truth, no one should have been surprised by the ECB's refusal… as the eurozone economy did not really deteriorate since the last meeting. So, I wouldn't be surprised if we now see some bargain hunters tip their toes in again at these lower levels," he told DW in an emailed statement.

In other market reactions, the euro hit a two-week high and bond yields rose across the eurozone.