Ebola outbreak in DR Congo declared to be over

Six people have died of the Ebola virus in DR Congo's eastern province of North Kivu in recent months. UNICEF is cautiously optimistic that the virus has been brought under control from a vaccine developed by Merck. 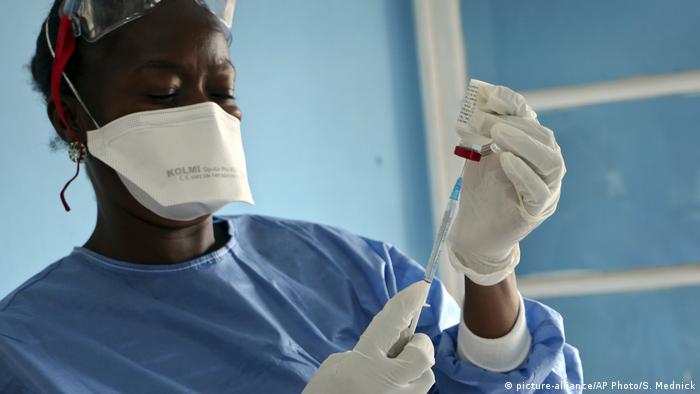 Merck's vaccine has been credited with ending the outbreak

The Democratic Republic of Congo on Monday declared the end of an Ebola outbreak that killed six people in the eastern province of North Kivu.

Twelve people in total were infected in the outbreak that was eventually contained using Merck's Ebola vaccine.

The vaccine was administered to more than 1,600 people who had been in contact with the patients, the humanitarian aid group Medecins Sans Frontieres (MSF) reported.

The cases were genetically linked to the 2018-20 Ebola epidemic that killed more than 2,200 people.

The latest outbreak emerged on February 3 in the city of Butembo. A woman died from the disease after her husband had contracted the virus in the previous outbreak. The health ministry said at the time that a sample of the woman's blood tested positive for Ebola after her death.

Symptoms of Ebola, such as fever, bleeding, vomiting and diarrhea, typically emerge between two days and three weeks after contracting the virus. It is spread among humans through bodily fluids.

"I am pleased to solemnly declare the end of the 12th epidemic of Ebola virus disease in North Kivu Province," DR Congo Health Minister Jean-Jacques Mbungani said in a statement.

"Despite the security context and the COVID-19 pandemic, the rapidity and efficiency of the response put in place by the government and its partners made it possible to defeat this pandemic in less than 3 months," he added.

UNICEF also heralded "the end" out of the latest outbreak while vowing to "continue to work alongside the Congolese government, its partners and communities over the next 90 days" as the humanitarian organization monitors developments.

Could Africa's taste for bushmeat trigger the next pandemic?

Bushmeat is considered a virus vector and a cause of countless diseases. But the problem goes far beyond the consumption of bat stew. And the next pandemic is already lurking.

A new pharmaceutical company ranking has said the industry is slowly improving access to medicine in low and middle-income countries. But it only mobilized on COVID once the pandemic threatened rich countries.