Defense ministers from the Visegrad Four - Poland, the Czech Republic, Slovakia and Hungary - have agreed to form a joint military unit for EU missions. Germany and France praised the move at the summit in Warsaw. 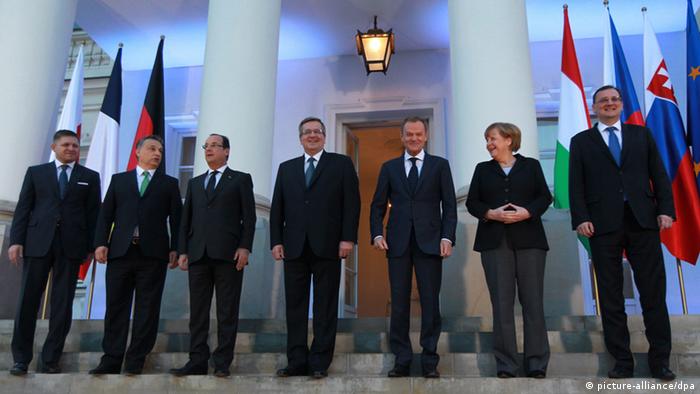 The letter of intent to strengthen military cooperation by EU's eastern member states stemmed from the need to save money, the Visegrad group said in a joint statement on Wednesday. National defense representatives from Poland, the Czech Republic, Slovakia and Hungary reached the agreement during the one-day summit in Warsaw.

"The ongoing global financial crisis is persisting and due to its negative impact on defense spending we have to concentrate on reinforcing multinational defense cooperation," the joint statement said.

As part of the new agreement, each of the four countries would contribute troops to fight in the 3,000-soldier unit. Poland's Prime Minister Donald Tusk said the military cooperative would be ready for deployment by 2016, according to news agency DPA.

The planned non-combative mission by the German Bundeswehr will not be the first of its kind. Since 2005, German soldiers have trained Malian engineers and Germany has donated large amounts of military hardware. (27.02.2013)

"NATO and the EU must cooperate closely, to achieve mutual reinforcement on initiatives while concentrating on developing the necessary capacities without unnecessarily doubling up efforts," the statement added.

Following the announcement on Wednesday, German Chancellor Angela Merkel and French President Francois Hollande - both of whom were visiting the conference for the first time - praised the effort to consolidate forces and enhance EU security.

"No country can do everything alone," Merkel told reporters at a press conference. "The engagement by France in Mali has again made clear how important it is that it be accompanied by other European states."

Earlier this year, EU member states pledged military personnel to help provide logistical and training support to a French-led military campaign in Mali. The UN-mandated intervention aims to wrest control away from Islamist militants linked to al Qaeda who have taken over the country's northern cities. The coordinated effort, which also relies heavily on troops from African allies, has been largely successful.

Leaders from Poland, Hungary and the former Czechoslovak Republic first formed the Visegrad Group in 1991 to increase joint regional efforts, including European integration. Its mission encompasses cooperation in areas mutually beneficial to the group - such as education, culture and environment - and neighboring countries.