Germany's Easter peace marches have kicked off around the country, calling for an end to arms exports to crisis areas. The marches remain popular, decades on from their Cold War heyday. 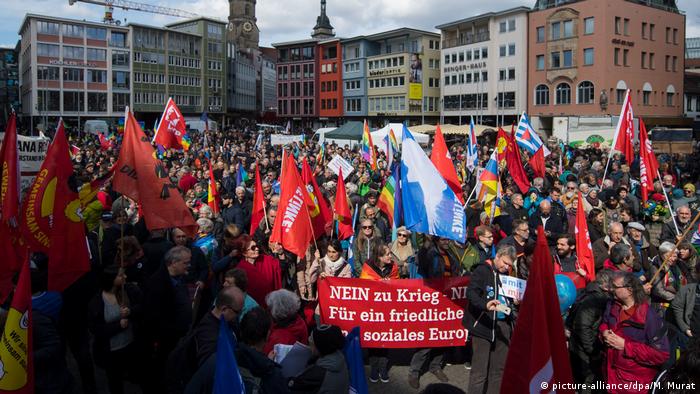 Thousands of people participated in the traditional anti-war Easter marches across Germany on Easter Saturday, under the theme "disarm instead of rearm — ban nuclear weapons."

This year's marches, which started on Good Friday and will continue through to Monday, called for an end to exporting arms to crisis areas.

"In the coming years, arms expenditure is to be increased to up to €70 billion ($78.7 billion) per year, when the money is urgently needed in many other places," said Philipp Ingenleuf of the pacifist Network of the German Peace Movement.

The money could be "invested much more sensibly" in education, housing construction or climate protection, Ingenleuf said.

The organization said more than 100 events were planned nationwide — an increase from last year's 80-odd events.

The three-day Rhine-Ruhr Easter march in North Rhine-Westphalia kicked off with rallies in Duisburg with about 150 participants and in Cologne with about 200.

On Good Friday, several hundred people took to the streets in Chemnitz, Saxony, while more than 300 people demonstrated at the uranium enrichment plant in Gronau, North Rhine-Westphalia.

Rallies were also held at the Bundeswehr air base Jagel in Schleswig-Holstein, in Bruchköbel in Hesse, and in Biberach in Baden-Württemberg. In Dortmund a commemoration ceremony took place in the afternoon at the Bittermark memorial.

Every year on Good Friday, Dortmund commemorates the lives of about 230 forced laborers, prisoners of war and members of the resistance who were killed around Easter in 1945 under the National Socialist regime.

The marches continued on Saturday with demonstrations in Berlin, Munich, Stuttgart and Leipzig, among others. Demonstrations in Frankfurt am Main and Hamburg on Monday will conclude the weekend's events. 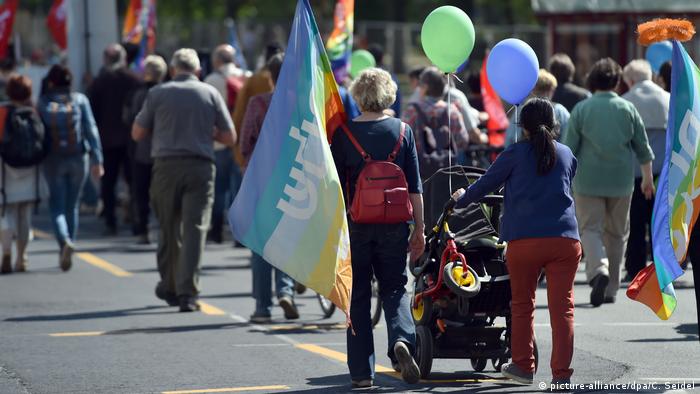 People of all ages took place in the Duisburg rally

Germany's Easter marches began with a demonstration in Hamburg in 1960. The demonstrations stem from protests against a nuclear weapons research facility in Britain in the 1950s.

The Easter marches reached their peak in support between 1968 and 1983, when events throughout West Germany brought hundreds of thousands out onto the streets each year to demonstrate against issues such as Washington's military involvement in Vietnam and the nuclear arms race.

Germans of all ages have hit city streets across the country to participate in a protest tradition with roots in Britain. Marchers broadcast their messages using colorful flags, signs and even Donald Trump masks. (31.03.2018)