More than 20,000 people gathered to participate in Germany's "Easter marches" over the holiday weekend. The annual events protest militarization and the presence of German troops in foreign countries. 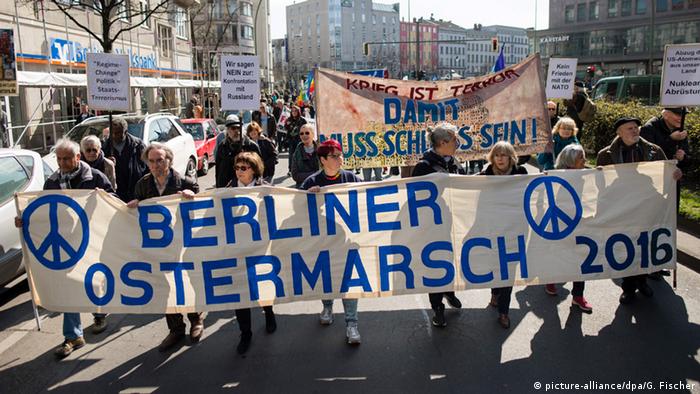 The numbers were an increase on the previous year in spite of the changeable weather, a spokesman for the central Easter Marches office in Frankfurt told the media, adding that nationwide there were about 80 different related demonstrations and gatherings to promote peaceful resolution to conflict.

Kristian Golla of the "Peace Cooperative" network in Bonn said that strong turnout showed "the basic skepticism with which our society views war and military intervention."

One event in the Eifel region of western Germany called for an end to the presence of American nuclear weapons in Germany. The Büchel air base in the Eifel received some 20 new B 61-12 atomic weapons from the US in September of last year, at the same time similar weapons were moved to bases that cooperate with the US in Aviano, Italy, and Incirlik, Turkey.

The Easter Marches began in Germany in the 1960s at the initiative German Quaker pacifist Konrad Tempel. In the late 50s, Chancellor Konrad Adenauer had dismissed concerns about nuclear weapons, saying they were "the latest development" in military technology and their existence was keeping Germans safe. The very first Easter March, organized by Tempel and his wife Helga Stolle, was held in 1960. Tempel and Stolle led some 1,200 peace activists on a multiday protest around the NATO training base Bergen-Hohne in Lower Saxony.

Campaigners across Germany have been on the streets to take part in the annual Easter tradition of marching for peace. Protesters called for, among other things, an end to arms exports and uranium enrichment for weapons. (26.03.2016)