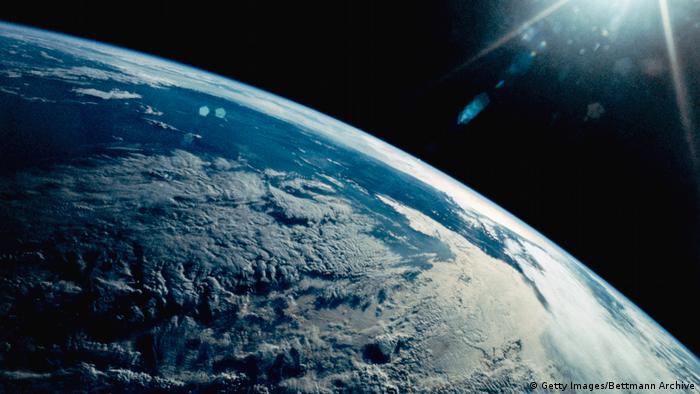 To continue living the way we do now, we'd need the resources of about 1.7 Earths

After a temporary reprieve due to the COVID-19 pandemic, Earth Overshoot Day — the day humanity is projected to have used up all the planet's biological resources regenerated in one year — has shifted forward again, this year landing on July 29.

"With almost half a year remaining, we will already have used up our quota of the Earth's biological resources for 2021," said Susan Aitken, leader of Glasgow City Council, where world leaders will gather later this year for the COP26 climate summit in November. "If we need reminding that we're in the grip of a climate and ecological emergency, Earth Overshoot Day is it."

As much of the world was living under coronavirus lockdowns in 2020, last year's Overshoot Day fell on August 22, nearly a month later than the high of July 25 set in 2018. But this year, even though carbon emissions from air travel and road transport are still lagging 2019 highs, a rallying global economy is pushing emissions and consumption back up. 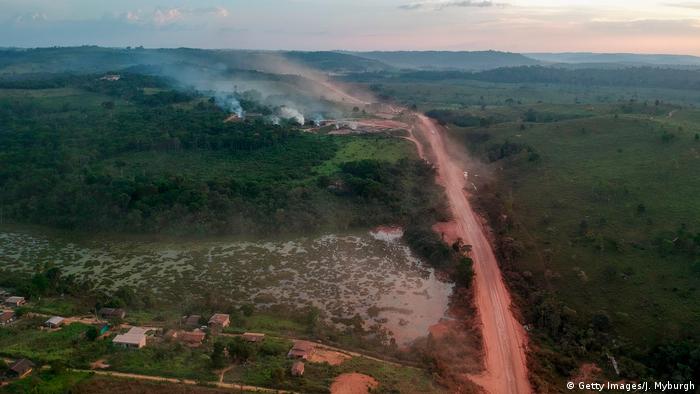 In Brazil's Amazon rainforest, an estimated 1.1 million hectares of primary forest were lost in 2020, roughly the size of Qatar

"Rather than recognize this as a reset moment, governments have been eager to get back to business-as-usual. Global emissions are already creeping back up to pre-pandemic levels," said Stephanie Feldstein, population and sustainability director at the Center for Biological Diversity (CBD), a US-based environmental group.

In an email to DW, she pointed out that even with last year's shutdowns, greenhouse gases only declined 6.4% in 2020 — a substantial drop representing around twice Japan's yearly emissions, but not enough to turn things around.

"We missed opportunities when bailout funds were given to major climate polluters, like the aviation and meat industries, without any requirements for a green recovery," said Feldstein. "And we continue to miss opportunities every day that officials refuse to recognize the climate and extinction crises as emergencies — just like the pandemic." 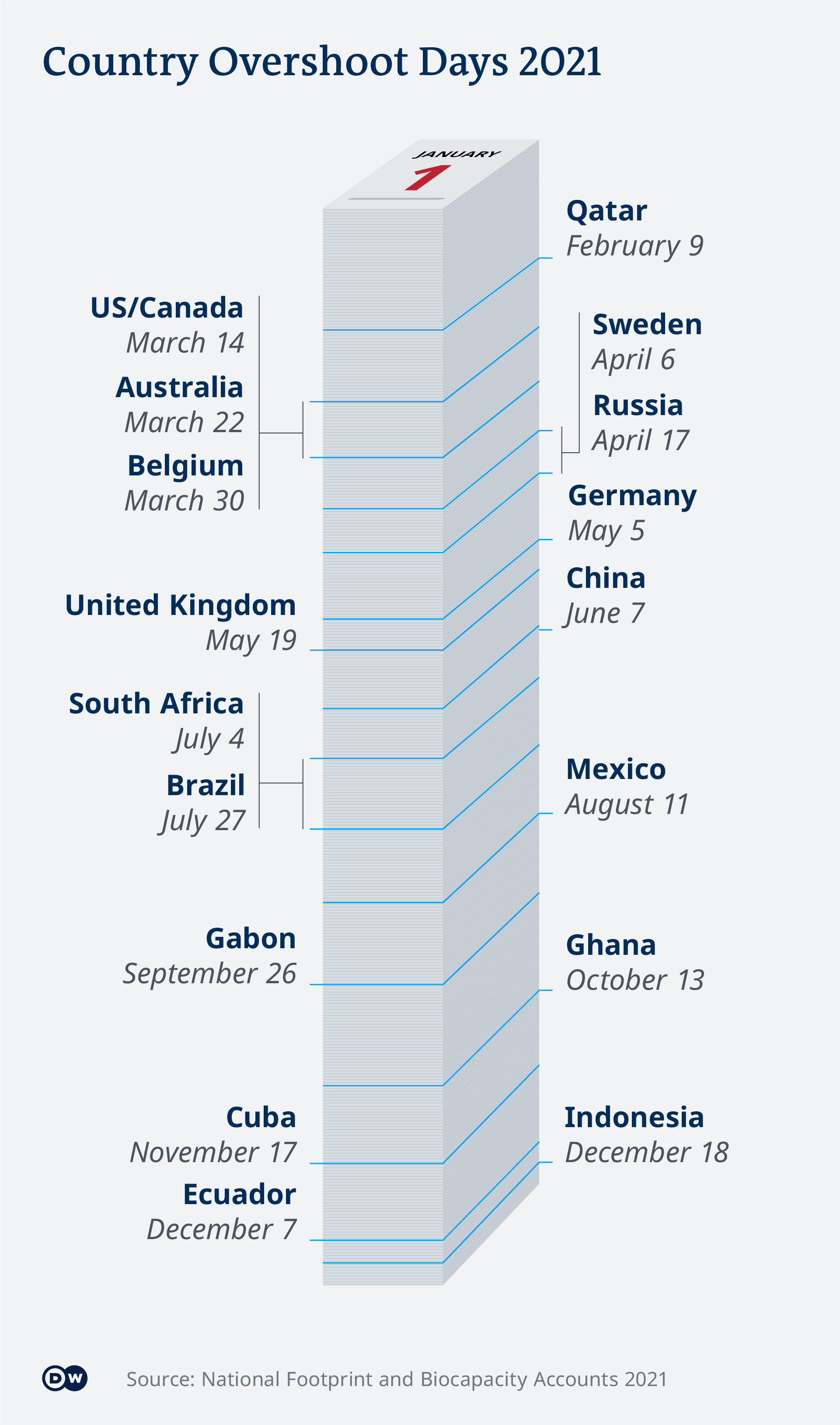 Earth Overshoot Day, first created in 2006, aims to calculate the number of days per year that correspond to the necessary biocapacity — the ability of an ecosystem to reestablish its biological resources and absorb waste — to account for civilization's ecological footprint.

Global Footprint Network (GFN), the research organization which comes up with the yearly date along with environmental group WWF, compares the calculation to a bank statement tracking income against expenditures. It crunches thousands of UN data points on resources like biologically productive forests, grazing lands, cropland, fishing grounds and urban areas. That tally is then measured against the demand for those natural resources, among them plant-based foods, timber, livestock, fish and the capacity of forests to absorb carbon dioxide emissions. 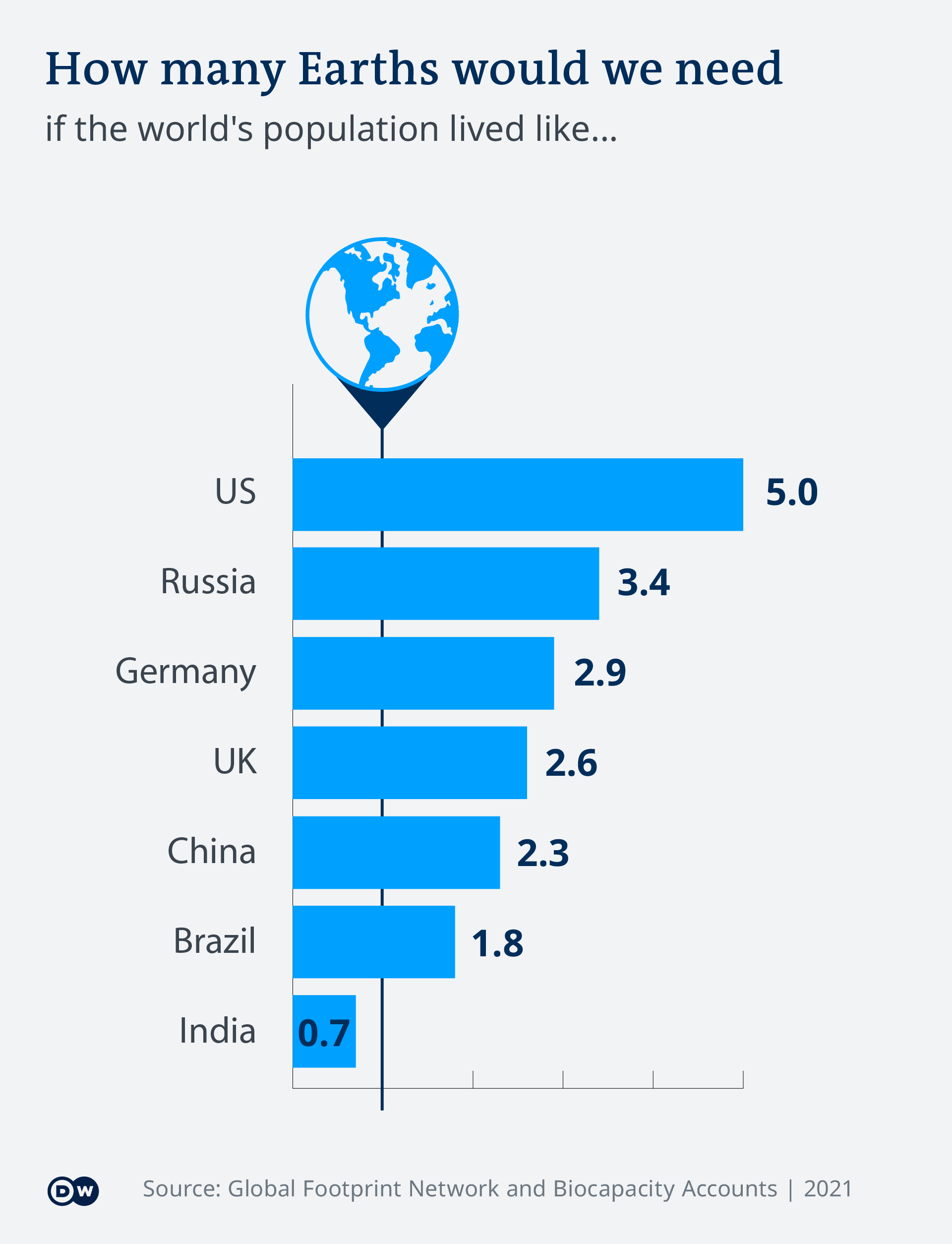 Today, humanity uses about 74% more than what global ecosystems can regenerate; to continue living the way we do now, we'd need the resources of about 1.7 Earths. And that doesn't look set to change any time soon. CO2 emissions related to energy — particularly fossil fuels like coal — are projected to grow by 4.8% this year over 2020 levels, according to the International Energy Agency.

Feldstein, however, sees some reasons to be optimistic. "The most hopeful signs are coming from communities around the world that are taking the climate crisis seriously, rethinking consumption and growth, and integrating equity and environmental protection into their policies," she said.

Among them are communities looking to tap into the bioeconomy, which aims to swap a "bio-based, or renewables-based, economy for the fossil fuels-based economy" while addressing societal challenges, as outlined in a December 2019 report by the Stockholm Environment Institute (SEI).

Rocio A. Diaz-Chavez, the deputy center director at SEI Africa in Nairobi, Kenya and the report's author, said making the shift to a bioeconomy can help preserve natural resources for future generations while working to create sustainable industries today. She highlighted regional groups like the UN's Economic Commission for Latin America and the Caribbean or BioInnovate Africa in Kenya — organizations which are working to promote bioeconomy and sustainable development in their parts of the world.

Diaz-Chavez told DW that the pandemic recovery could be the opportunity for these regions to explore alternatives to the traditional economy that would "contribute to job creation and improve livelihoods, [while] producing alternatives to fossil fuel products."

One example: reducing the Global South's reliance on fossil-fuel derived pesticides and fertilizers shipped in from abroad, in favor of locally produced biofertilizers. "This would have a series of contributions to human health, and to the environment," she said, adding that this shift could also help develop alternative supply chains for other sustainable products.

She stressed, however, that the development of the bioeconomy hinged on having the necessary infrastructure or improved supply chains in place to support and market such products, especially in sub-Saharan Africa.

Greening our economies isn't the only way to bring us back into balance with the Earth. On its site under the rallying cry #MoveTheDate, the Global Footprint Network (GFN) highlights other ways to bring that date closer to December 31.

Reforesting an area the size of India, for example, would shift the date back by eight days, according to GFN. Retrofitting buildings and industries with existing energy-saving technology, such as mechanical system upgrades, water conservation controls and sensors that accurately control lighting, temperature and air quality, would move the date back by 21 days.

Food is another important area — according to GFN, half of the Earth's biocapacity is used just to keep us fed. But too much of that food is lost due to inefficiencies during the production process, or waste; an estimated 30 to 40% of food in the US ends up in landfills every year. 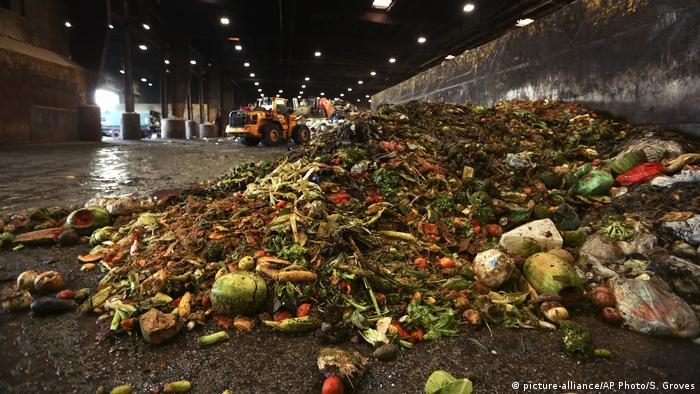 About one-third of the world's food — 1.3 billion tons every year — is lost or wasted every year

By eliminating food loss and waste, reducing meat consumption and choosing foods grown with more sustainable agricultural practices less reliant on fossil fuels, another month could be added to the Earth's biocapacity account. Shifting to more plant-based diets, for example, could help reduce food-related emissions as much as 70% by 2050, according to a recent draft report released by the Intergovernmental Panel on Climate Change.

"While we need to transition away from industrial agriculture as a whole, we can't solve this problem by simply tweaking how food is produced — we must change what is produced," said the CBD's Feldstein, adding that while fossil fuels are responsible for more emissions overall, meat and dairy production are also a major cause of habitat loss. "Governments can accelerate this change by supporting plant-centered diets and agriculture and ending subsidies for cheap meat and dairy."

Fact check: What can I do for climate protection?