After making her 101st international appearance against Greece, Germany's Dzsenifer Marozsan spoke to DW about the year just gone and the year to come, as the team prepares for the 2022 European Championships. 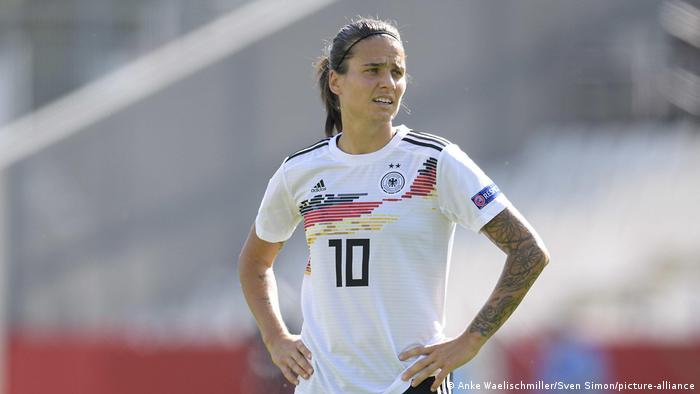 DW: In the men's game, there have been complaints for years about having to play "small opponents" in qualifiers. What's it like for you to play against Greece or North Macedonia?

Dzsenifer Marozsan: Whether we play against bigger or smaller nations, we take them just as seriously. They're all competitive games and there are always three points at stake which we want to win.

How has 2020 been for you and the national team, given all the issues with the pandemic, the busy schedule and the number of young players in the squad?

[The whole situation] is sad for us, as it is for everybody, but we're making the most of it. We're just happy that we're still allowed to play football. We have a lot of young players who bring talent and freshness to the team, so I'm happy to have the girls on board.

After over 70 games without a defeat with your club, Lyon, you recently lost again – but you're still undefeated with the German national team since 2018. What's the secret to not losing football matches?

Losing again [with Lyon] wasn't actually a bad thing; it's something we can learn from. What's the secret? You have to go into every game with the same attitude, the same will to win. That applies to training as well. I always try to ensure I retain this mentality, and so does the team. That's why I'm happy that I play with such top talents, both with the national team and with my club.

With Euro 2022 in England edging ever closer, how important will next year be for you? Is the moment of truth approaching?

Next year will be extremely important, especially since we don't have any more competitive games. That means that the friendlies will be even more important ahead of the Euros. We'll use them to prepare and of course it will be good to play against bigger nations, really bond the team together and work on specific details.

What's the chemistry like in the team at the moment?

The atmosphere is fantastic, we have a great group of girls and the coaching staff are great. They do absolutely everything to help us and that's important. The communication is good, too. Martina [Voss-Tecklenburg, the head coach] is great at that.She actively looks for contact with the players, that's really important.

Dzsenifer Marozsan was born on April 18, 1992, in Budapest, Hungary, she has played for the German national team since 2010 after moving to Saarbrücken, Germany, as a child. She played for FFC Frankfurt from 2009 until 2016 before moving to French side Lyon, with whom she has won five Champions Leagues. With the national team, she won the 2013 European Championships and an Olympic gold medal 2018.

The interview was conducted by Steffen Focke.