The fifth Deutsche Welle Global Media Forum will take place from 25 to 27 June 2012 in Bonn. "Culture. Education. Media - Shaping a Sustainable World" is title of this international conference. 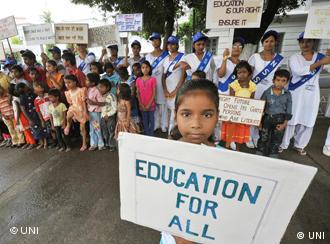 We are all part of a global society overflowing with information that can be accessed practically anywhere and at any time. We are also confronted with a chilling statistic: Approximately 850 million people around the world are illiterate, most of them in crisis regions and war zones. Even in a highly industrialized nation such as Germany, 14 percent of the population is “functionally” illiterate, according to a recent study by the University of Hamburg.

In 2002, the United Nations General Assembly adopted a resolution to declare the ten-year period from 2005-2014 the Decade of Education for Sustainable Development. Taking an interim look reveals that the matter has lost none of its relevance. It is increasingly evident that education, culture and upbringing form the key to peaceful co-existence and a sustainable future.

The 2012 Deutsche Welle Global Media Forum addresses these issues, focusing on the role of the media. Catchphrases such as global education and lifelong learning, intercultural dialogue and education for all have become synonymous with humanity’s future viability. Education is an essential factor for meeting the many challenges posed by globalization. Initiatives and campaigns around the world don’t limit themselves to the transfer of knowledge; they aim to firmly anchor sustainable values in education systems.

The 2012 Deutsche Welle Global Media Forum will examine the role and responsibility of the media with their images and messages. How can media contribute constructively to cultural diversity? How can they serve to enhance awareness of the essential importance of education for sustainable development? Can media themselves carry out educational activities? Do they serve as a role model for presenting and conveying educational content?

In more than 50 seminars, panel discussions and workshops, the conference will concentrate on topics such as:

· Education and the role of the media

is a congress with international reach. It draws media representatives from around the world – including staff from many of Deutsche Welle’s partner stations – and experts from the fields of politics, culture, business, development and science. In their interdisciplinary exchanges they develop approaches to meeting the challenges of globalization in which media play a central role. In the past, the Deutsche Welle Global Media Forum has focused on topics such as conflict prevention, climate change and human rights.

In June 2011, some 1,600 delegates from more than 100 countries gathered to discuss “Human Rights in a Globalized World – Challenges for the Media”.

First flyer about the conference 2012