In Egypt's difficult environment, DW Akademie's projects focus on empowering young women in and through the media. 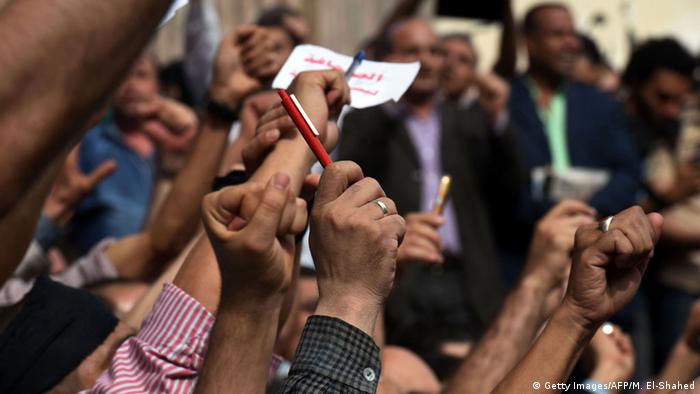 Over the past years, press freedom in Egypt has diminished dramatically. Government propaganda, attacks on dissidents and activists who speak out for democracy and civil rights, and direct reprisals characterize the situation in the country today. Time and again journalists are arrested and put on trial because of their work. According to the independent non-profit organization Committee to Protect Journalists, in 2015 only China imprisoned more journalists (49) than Egypt (23). There are virtually no media organizations left in Egypt that dare to report critically on government affairs, and civil society actors are also being routinely prevented from carrying out their work. Numerous Egyptian organizations accused of illegally accepting foreign funds have been prosecuted or closed down. Prominent human rights activists are being prevented from leaving the country. Those most affected believe that the government wants to systematically dismantle what's left of Egypt's independent civil society.

Our Activities In this difficult environment, DW Akademie's projects in Egypt focus on empowering young women in and through the media. The long-term project "Women's Voices" supports female journalism students and young women entering the profession as they develop their own media projects in preparation for the start of their journalism careers.

Discrimination, low pay and ridicule are just some of the tactics that prevent Egyptian women journalists from moving up the career ladder. Women reporters talked about the obstacles at DW Akademie workshops in Cairo. (15.12.2014)

Helping women journalists get ahead in a male-dominated profession is the goal of Safaa Mohamed Abdelhamid, journalist and co-founder of the Union of Media Women in Egypt. Inspiration came from workshops by DW Akademie. (18.05.2016)