Two DW Akademie projects support the reappraisal of the decade-long conflict between the government and rebel groups in Colombia. The documentary film by a local television station served as an example. 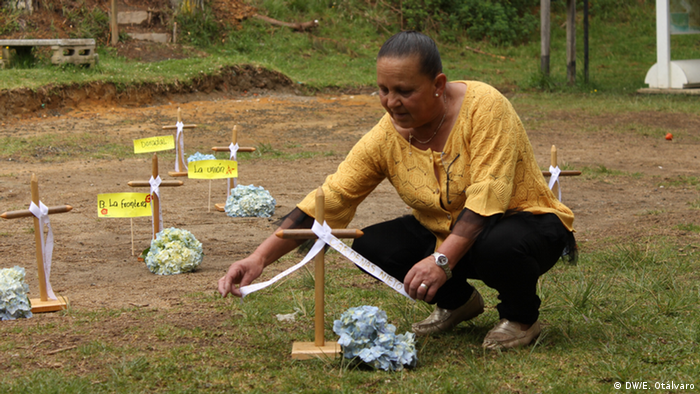 With a small wooden cross Gertrudis Nieto remembers her son, who was shot by soldiers.

It took fifteen years until Gertrudis Nieto had the courage to talk about the painful loss of her son Jesús for the first time. Sonsón, three hours by car from Medellín, was then, like so many villages in the area, the site of bloody conflicts between guerrillas, paramilitary groups, and government security forces. Jesús had joined a paramilitary group that had set up camp outside the village in a recreational centre. There was a confrontation with the military; 18 young people were killed. Today, the public prosecutor's office is investigating the matter, so far without success. For Gertrudis Nieto, however, it is obvious: Those responsible are in the capital Bogotá. “We were helplessly exposed to the attacks of the armed groups; the state didn’t do anything. My son Jesús believed, like many other young people, that he had to protect his family.”

The silence has been broken

Journalists from the local television station Sonsón TV reconstructed the events in a documentary film with Doña Gertrudis as the lead. The film is the result of a project of DW Akademie and its local partner, the Universidad de Antioquia. This is the first time there has been comprehensive reporting about the case and the question of responsibility is being asked. Much has changed for Gertrudis Nieto since then. She had been excluded from the village community for years because of her son’s connection to the paramilitary group. Nobody wanted to talk to her; she felt guilty. Last Easter, a memorial was held in Sonsón for the young people who had been shot for the first time. The film was screened, and Gertrudis Nieto addressed the audience. Afterwards many embraced her. For the first time, she was perceived as one of the millions of victims of the decade-long conflict. “It was worth it to talk about it,” says Gertrudis Nieto after the memorial.

Three hours of winding roads from Sonsón lies Granada. Green countryside, small colourful farm houses in between avocado, orange, and coffee plantations. Why was a war waged for many years here of all places? Due to the proximity to the metropolis Medellín and the highway to Bogotá, various groups fought over the control of the territory and the civilian population.

The numbers of the National Center for Historical Memory speak for themselves: In Granada, a town with a population of 10,000, there were ten massacres, 460 people were killed, and another 98 were abducted, one car bomb devastated four street block in the village centre.

Since 1964 Colombia had been dominated by the conflict between left-wing guerrillas, right-wing paramilitary groups, and the military. The FARC rebels handed in their weapons after long negotiations this year; the Colombian President Santos was awarded the Nobel Peace Prize for his efforts. The reappraisal of the decade-long violence, however, is progressing only slowly. For three years now, DW Akademie, together with the Universidad de Antioquia, has been supporting Granada’s community station in its coverage of the conflict.

Together with the local victims’ association, the local journalists have presented the history in two timelines – on the one side, the violence of the armed groups, on the other, the civil resistance of the villagers. The multimedia presentation is the result of a two-year training and consulting program, with journalistic training, talks and seminars on history and reappraisal, work groups and discussion forums. "We younger people were still children then,” says Dubian Giraldo, director of the radio station Granada Stereo, “every family here has victims to mourn, but we only knew parts of the history, through hearsay. Since we started to do research ourselves, we have begun to understand the complexities of the situation.”

The story of violence and civil resistance in Granada can now be seen on interactive screens in the “Salón del Nunca Más,” a community space dedicated to the memory of the victims. DW director general Peter Limbourg visited the „Salón del Nunca Más“ during his visit to Colombia in July and talked to victim representatives and local journalists. He was impressed by the multimedia reappraisal: “It is very important to create spaces so that memories stay in the community,” says Limbourg.

As a next step, the multimedia presentation is supposed to be used in the schools of the community. “History isn’t being taught in Colombian schools,” says Matthias Kopp, country coordinator of DW Akademie. “In this still divided country, people apparently cannot yet agree on a version suitable for the classroom.” The residents of Granada and Sonsón are already further along as far as this is concerned: They have taken their history into their own hands.