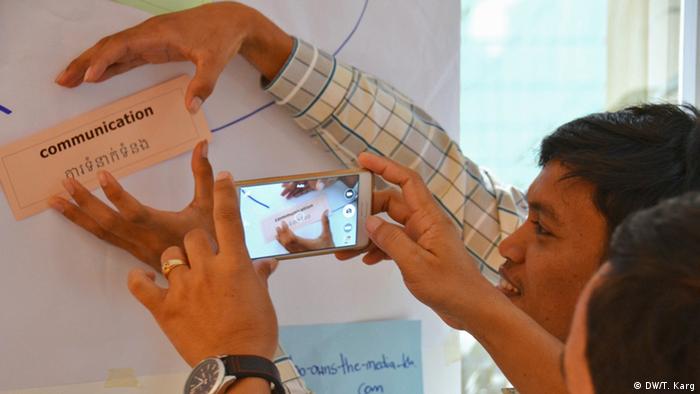 Freedom of the press and information are limited in Cambodia. Most TV and radio stations are under state control or belong to business people with close ties to the government. Almost all independent media have been shut down in recent years or forced to do so.

Self-censorship is common among journalists since critical or investigative can be punished.  Some leeway, however, is offered by the Internet which is rapidly reaching a growing number of Cambodians. Especially young Cambodians use social media platforms including Facebook to stay informed and exchange ideas. For many, Facebook is their most important source of information.

Within the country's tightly controlled media landscape social media play an important role for communicating and disseminating information. However, especially in the provinces, people often lack important skills for working with social media. Many are not aware, for example, of digital security issues, filter bubbles and misinformation. In response, DW Akademie is conducting projects to improve the media literacy of women and young people – in both the capital, Phnom Penh, as well as in specific provinces. Media and information literacy (MIL) enables them to access, assess and disseminate relevant information themselves.

With DW Akademie support, the Open Institute non-governmental organization and Cambodia's education ministry have developed a schoolbook containing MIL teaching and learning modules. It is being used throughout the country. The partners also co-organize MIL campaigns and project days at schools to raise more awareness about book's content.

Together with the Women's Media Centre of Cambodia (WMC) DW Akademie reaches young people in rural areas. DW Akademie has trained WMC staff to pass on their MIL skills to heads of youth-oriented centers. This way, youth in these regions learn how to assess media information and deal with modern communication technology and social media.

Are young men and women in Cambodia equal in terms of freedom of expression and access to information? DW Akademie asked young Cambodian media workers for their opinions.

In Cambodia a group of journalists are choosing facts over fiction

CamboJA, an association of journalists from Phnom Penh are fighting to improve access to reliable information during the pandemic. Now they are sharing what they learned.

Cambodia has one of the fastest growing economies in the world. How can journalists find the stories behind this development? Nine young Cambodian journalists find out how as part of the project "Markets and Movers". (07.06.2019)