The president of the Philippines has said he wants to counter communist rebels with their own weapon: armed death squads. But rights groups fear this will escalate an already deadly environment in the country. 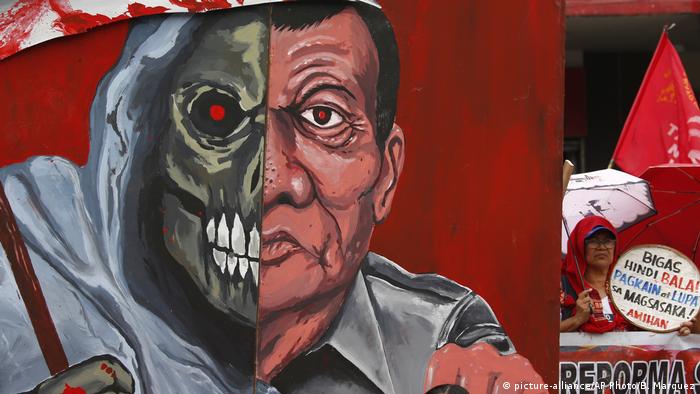 Philippine President Rodrigo Duterte has announced plans to create a "death squad" to combat communist rebels in the country.

In a speech given on Tuesday night, Duterte spoke of his proposal to contrast the so-called sparrow units, small assassination squads manned by the New People's Army (NPA), the military branch of the Communist Party of the Philippines (CPP).

"The only thing missing is my own sparrow unit. That's their only advantage," Duterte said. "So I will create my own sparrow. Duterte death squad against the sparrow."

"I will match their talent also for assassinating people," he added.

The government of the Philippines has been fighting against communist militants for over 50 years – one of Asia's oldest insurgencies.

Duterte noted that his administration tried to resume negotiations with the rebel groups, but the attempt was halted after a series of deadly attacks against civilians and security forces.

After the negotiations broke down, Duterte declared the NPA and the CPP terrorist organizations.

Plan to be studied closely

Defence Secretary Delfin Lorenzana said on Wednesday that security officials would study the plan "very closely" to determine "who will compose [the squad], who will supervise it, who will be the targets."

In an interview with CNN Philippines on Wednesday, he also warned that there is "great danger of abuse or mistakes in these undercover operations," and that operatives should not have any blanket authority.

The founder of the Communist Party, Jose Maria Sison, said on Wednesday that "sparrow units" only existed in the 1970s and 1980s, and that Duterte is making up the presence of these units today "to justify his own death squads which are illegal."

The low-level communist insurgency that has been ongoing since the 1960s has claimed 30,000 lives by the government's count.

Campaigners fear that Duterte's death squad plan would worsen the killings encouraged by the president's "war on drugs."

According to police statistics, Duterte's campaign against the illegal trade has left nearly 5,000 alleged users or dealers dead since 2016. Rights groups say the death toll is at least three times higher.

Campaigners say the plan would put a dangerous tool in Duterte's hands.

"His [Duterte's] statement is a declaration of open season against rebels, leftists, civilians and critics of the government," said Carlos Conde from Human Rights Watch (HRW).

"Given how easy it is for the authorities to accuse anybody of being a rebel or a 'communist sympathizer' and declare them as 'enemies of the state,' Duterte's announcement is abominable and should be rejected by Filipinos, human rights defenders and the international community," he said.

Clarita Alia has lost four of her sons to extrajudicial killings in the Philippines. She says many more mothers like her will have to bury their sons as long as Duterte is president. Ana P. Santos reports from Davao. (24.08.2018)

It has been two years since Duterte became president of the Philippines and unleashed a brutal war on drugs. The death toll is high but nobody seems to know the real numbers — not even the police, as a DW research shows. (09.05.2018)