Dutch voters to go to the polls on September 12

The Netherlands is facing months of political uncertainty after Queen Beaxtrix agreed to a September election. The move came after the country's center-right government collapsed in a row over austerity plans. 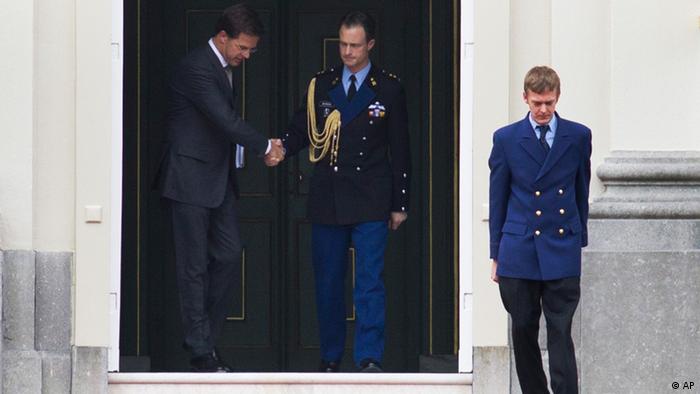 Dutch voters are to go to the polls to elect a new government on September 12, the royal family said Wednesday, as

The announcement from a spokesman for the crown comes a day after Queen Beatrix accepted the resignation of Prime Minister Mark Rutte and the parties represented in parliament agreed on the timing of the vote.

Rutte of the conservative People's Party for Freedom and Democracy (VVD) tendered his resignation after losing the support of the Freedom Party (PW), led by anti-Islam politician Geert Wilders in a row over proposed austerity measures.

The eurozone debt crisis has triggered a domino effect in Europe, toppling governments regardless of their ideological persuasion. DW's Bernd Riegert examines the consequences. (24.04.2012)

Wilders' party was not part of Rutte's center-right coalition, but he had relied on the PW's support to get legislation through parliament. Wilders announced last weekend that he was withdrawing that support after seven weeks of negotiations failed to produce an acceptable compromise.

The collapse of the government, which had only been in office for 18 months, has forced Rutte to solicit the support of the opposition as he faces an April 30 deadline to present his budgetary plans to the European Union.

The outgoing government has said it is determined to ensure that the Netherlands meet the EU's budgetary deficit ceiling of 3 percent of gross domestic product in 2013. Without the spending cuts, the country's deficit for next year is estimated at 4.6 percent of GDP.

There is also concern that the Netherlands' top-notch AAA credit rating could be at risk. Observers say that even if the outgoing prime minister is successful, matters won't be helped by months of political uncertainty leading up to the September polls.