Police in the Netherlands have arrested a man after they evacuated a high-speed train and much of Rotterdam's main railway station. Passengers became alarmed after a the man locked himself in the toilet. 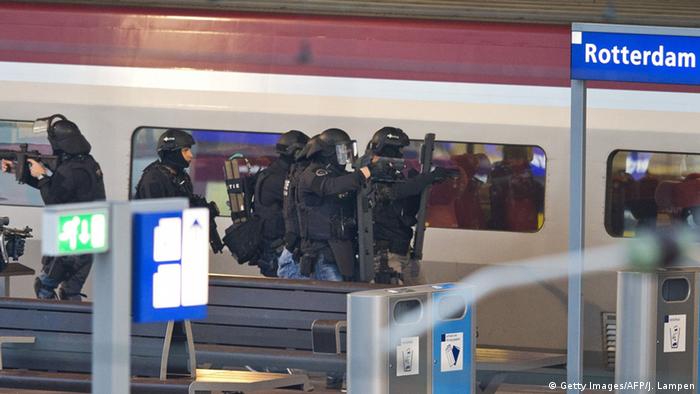 Dutch police cleared the train and several station platforms, before detaining the man on Friday.

The high-speed Thalys train had been travelling from Amsterdam to Paris when passengers alerted authorities that a man had locked himself in the bathroom.

Police had said the evacuation had been a "precautionary measure," with a negotiator on the way to talk to the suspect, before announcing the arrest.

The man was said to have jumped aboard the train just before the train departed from Amsterdam, and immediately locked himself in. Passengers said they believed he was armed. The Rotterdam police did not initially say whether the suspect had weapons, and said an investigation was underway, with the train being searched.

The arrested suspect was taken to hospital, police tweeted, apparently suffering from hyperventilation. Police said one officer had been injured in the incident after being bitten by a police dog. There were no further details about the circumstances of the arrest.

The incident came less than a month after an armed man was subdued by passengers aboard a train on the same line.

Before the arrest, Thalys tweeted that the situation was under control.


European rail operators last week met interior and justice ministry officials from across the EU to discuss whether to improve train security, with ministers agreeing action was needed. Dutch national railway NS reported disruptions to train traffic around Rotterdam, saying there might be delays of up to an hour.

France has formally opened an investigation after a thwarted attack on a high-speed train last week. The 25-year-old Moroccan suspect allegedly recently visited a Turkish border city near Syria. (25.08.2015)