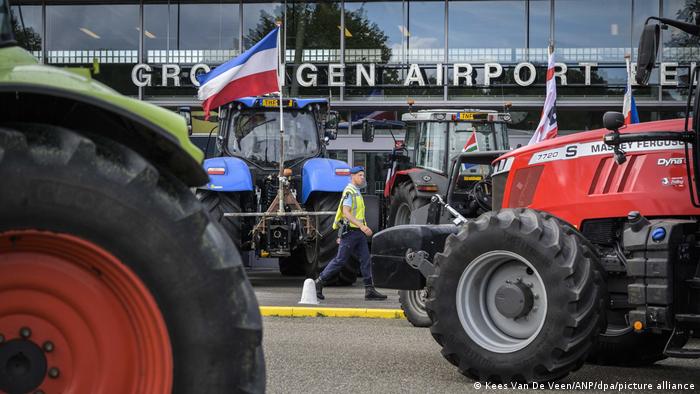 Farmers protested with their tractors at the Groningen airport on Wednesday

Dutch authorities on Wednesday said an official investigation has been opened into the events of a heated night of farmers' protests in the north of the Netherlands.

Farmers have been demonstrating against a government proposal to slash emissions of pollutants. The protests turned into unrest as they blocked roads and supermarket distribution centers for several days.

Police say they fired warning shots late on Tuesday and arrested several people after protesting farmers started driving their tractors toward officers at a highway entry lane in Friesland.

But the protesters contest the police's statement, claiming they posed no threat to the officers.

According to local media reports, the Dutch farmers' interest group LTO called for an investigation, while the police union ACP insisted it was an incidental event that would not contribute to further escalation in the already tense situation.

Hours later, on Wednesday morning, protesting farmers were gathering outside the Groningen airport in the north of the country.

The protesters were seeking to block the Groningen airport with their tractors. Medical flights were not affected, according to an official as quoted by the Volkskrant newspaper.

Protesters are angry about new environmental law proposals that seek to curtail emissions of nitrogen oxide and ammonia by 50% by 2030. According to estimates by the government itself, some 30% of livestock farmers will have to shut down their businesses.

Provincial governments have been given a year to work on plans to reach the target.

Farmers say they are being unfairly targeted and complain that the government has not given perspective on their future.

The government has appointed an intermediary to lead talks between farmers' organizations and officials drawing up pollution reduction measures.

But Prime Minister Mark Rutte has ruled out negotiating with farmers responsible for the unrest, which includes violence outside the private home of Environment Minister Christianne van der Wal, as well as blockades at food distribution centers across the country.