Dublin bailout of Anglo-Irish to boost deficit to one-third of GDP | Europe | News and current affairs from around the continent | DW | 30.09.2010

The bailout of the Ireland's debt-ridden Anglo-Irish Bank could cost Dublin as much as 34 billion euros, making new budget plans necessary. The country's deficit is set to hit 32 percent of gross domestic product. 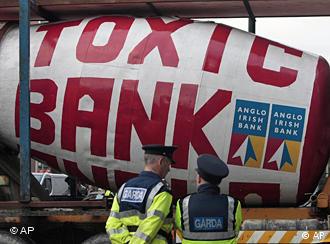 There is public opposition to the bank bailout

The cost of Ireland's state bailout of Anglo-Irish Bank could rise to hit 34.3 billion euros ($46.6 billion) an amount equivalent to the nation's annual taxation revenues.

A statement from the country's central bank on Thursday placed the total cost of the bailout at 29.3 billion euros, but it added that the figure could rise.

Irish Finance Minister Brian Lenihan said the bill for the country's banking crisis was "horrendous," and would contribute significantly to a projected government deficit of some 32 percent of gross domestic product (GDP). 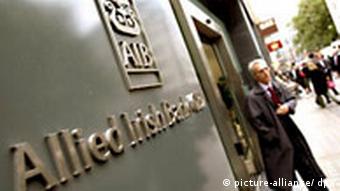 "There will be a very substantial spike in Ireland's general government deficit in 2010 as a result of the capital support that we are providing to our banking system, totaling almost 20 percent of GDP," Lenihan said in a statement.

"On a purely headline basis our general government deficit for 2010 will be around 32 percent of GDP."

Lenihan also said that the state might need to take a majority stake in another institution, Allied Irish Bank, which needs an extra 3 billion euros in capital this year.

A decision by the Irish government to draw up a new four-year budget plan in November, to show how it would manage the growing pressure on public finances, was welcomed by European Commissioner for Economic and Monetary Affairs Olli Rehn. "We strongly endorse Finance Minister Lenihan's handling of this issue," said Rehn.

Ireland's banking sector was badly hit by the global financial crisis, recession and the severe decline of the country's property market.

The bailout has met with some public opposition and on Wednesday a cement truck was rammed into the front gates of the Irish parliament in protest.

The nation has already been struggling to retain the confidence of investors about its public deficit, which the government aims to reduce to below 3 percent of GDP by 2014.

Germany's Hypo Real Estate bank has failed the so-called stress test to see if it could survive a future financial crisis. The picture for the rest of Germany's banking sector is more positive. (23.07.2010)

As the situation in Greece continues to intensify, fears are increasing that the debt crisis will spread throughout Europe. DW takes a look at some of the European bankruptcy candidates in line behind Athens. (28.04.2010)

Since its building boom ended, Ireland has become a land of unoccupied and half-finished houses. Now, housing market analysts in the country are asking themselves the proverbial question: What went wrong? (09.03.2010)