Pharmaceutical giant Bayer is being pounded by the courts and stockholders as the crisis over its Lipobay drug deepens. The cholesterol-lowering drug was pulled from shelves in 2001 after it was linked to 52 deaths. 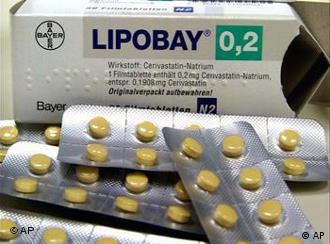 Lipobay's side effects have become a serious fiscal health issue for Bayer.

When Bayer's Lipobay drug went on the market in the mid-1990s, it was an instant success. Until 2001, some 7 million patients took the cholesterol-lowering tablets, earning Bayer millions in profits. Now that same drug is threatening to ruin the financial health of the Leverkusen-based conglomerate.

A case now in a U.S. court could cost Bayer several hundred million dollars in damages if plaintiffs can prove that Bayer executives knew of the possible dangers of the drug without removing it from pharmacy shelves.

The company first pulled Lipobay -- sold in the United States under the Baycor brand -- from the market in 2001 after it was linked to serious side effects including 52 deaths. Some patients who took the drug in combination with certain other medications developed severe muscle weakness, and some 100 deaths worldwide are suspected to be linked to the Bayer product.

Did the bosses know?

Lawyers in a Texas case involving a retired engineer who developed a muscle disorder after taking the drug have submitted memos and e-mails that they claim show that members of Bayer's management knew of the drug's side effects well before the company pulled it off the market in 2001. A New York Times article also raised suspicions that executives knew that high doses of the drug could cause health problems. Mikal Watts, the attorney representing the plaintiff in the Texas case, has said he will ask for $500 million in punitive damages.

That case is only one of some 8,000 complaints against Bayer that have been submitted in the United States. Lawyers are now considering bringing a class-action lawsuit against the company. Bayer has already spent more than $125 million to settle 450 cases related to the drug. The company is currently seeking to reach settlements in 500 more cases.

The latest developments have sent Bayer stock into freefall. Shares have dropped by more than 20 percent this week alone. From highs of €50 ($53.94) a share before the Lipobay recall, Bayer stocks had fallen to €12.10 by Friday. The market value of Bayer, one of Germany's largest companies, has shrunk by some €8 billion.

Bayer executives deny that they had any prior knowledge of Lipobay's possible dangers before taking the drug off the market. Attorneys for the company say documents brought forward by plaintiffs have been presented out of context and are misleading.

In an attempt to slow the current stock market blood-letting, Bayer took out full-page ads in German newspapers on Friday. In them, it defended its actions and said the current stock valuation did not accurately reflect the health of the company and that stockholders had fallen victim to what Bayer called "cheap propaganda."

"Despite the difficult economic and even global political situation right now, we believe we can put the company back on a path to success," the ad read.

But the litigation in the U.S. clearly has Bayer worried, particularly because of the large court settlements that have become common in American courts. A statement this week by Werner Wenning, Bayer's chairman, sent stocks tumbling further when he admitted that the company might have to make provisions for liability arising from Lipobay. Some estimates put that liability as high at $10 billion.

Andreas Theisen of West LB Panmure in Frankfurt told the Financial Times that he agreed with Bayer that the market reaction to the crisis has not been justified.

"However, no one is able to quantify the potential impact," he said.

Munich lawyer Michael Witti, who successfully sued on behalf of Nazi-era slave laborers, will join a lawsuit filed on behalf of those who suffered from side effects of Bayer's cholesterol-reducing drug Baycol.

After posting second-quarter results that were well below analysts’ expectations, the pharmaceuticals and chemicals giant said it saw no reason to expect a turnaround before the end of 2002.