Dresden stands up to neo-Nazi march

For years, neo-Nazis have marched on the anniversary of the 1945 Dresden air raid. In 2011, tension with counter-demonstrators escalated into clashes. But this year, the city seemed to have learned from past mistakes. 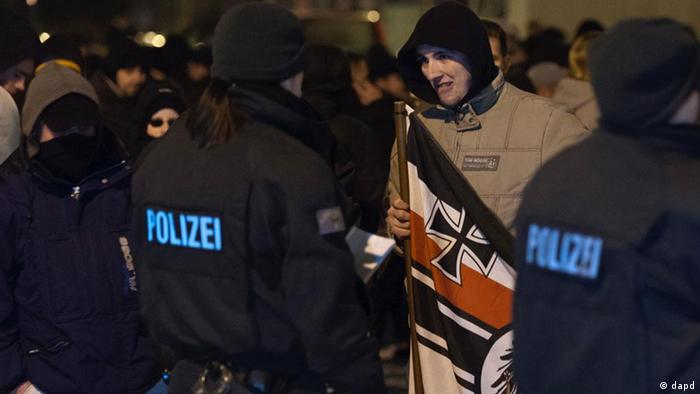 "Funeral march" is how the neo-Nazis have described what has become their traditional annual rally marking the anniversary of the 1945 Dresden bombing.

Last year, more than 6,000 right-wing demonstrators were in the city. The gloomy spectacle with torches and drums escalated into brutal violence when neo-Nazis clashed with counter demonstrators and police forces were caught between the front lines.

This year, the day remained largely peaceful. According to police, around 1,600 right-wing extremists attended the march. Three times the number of police officers, along with several thousand counter demonstrators, kept them in check.

White flowers for the victims

It seems that finally, a peaceful commemoration of the victims of the Dresden bombing has become possible.

"We won't tolerate the abuse of the memory of this event," said Mayor Dirk Hilbert at the official commemoration, held in the afternoon. The event took place at one of the city's cemeteries, where the remains of more than 20,000 of the bombing victims are buried.

Hundreds of white flowers were laid out in remembrance. Among those in attendance were Saxony State Premier Stanislaw Tillich, as well as US Consul General Mark Powell and representatives of the British embassy. It was bombers from those two countries that on February 13 and 14, 1945 led the attacks against the city, destroying the baroque "Florence of the Elbe" and killing more than 20,000 people. 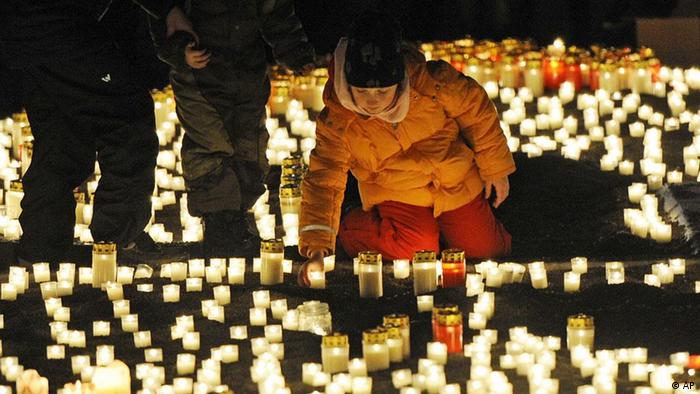 Candles were lit to remember the victims

A sea of tears

Those who attended the ceremony came from all across Germany to remember all the victims of World War II. Older people who survived the inferno of 1945 stood side by side with the young.

In the midst of the crowd stood the "Mourning Girl in a Sea of Tears," a statue sculpted by Malgorzata Chodakowska in 2010. The work was funded by a donation from a Dresden citizen who herself survived the attack as a 9-year-old girl.

From the sculpture, it's only a few hundred meters to another monument with a commemorative flame surrounded by 14 pillars, on which are inscribed the names of cities destroyed in World War II, as well as Nazi massacres and concentration camps.

Dresden and Warsaw are on the list, as well as Auschwitz, Theresienstadt and Lidice, all places of terror, death and senseless war. 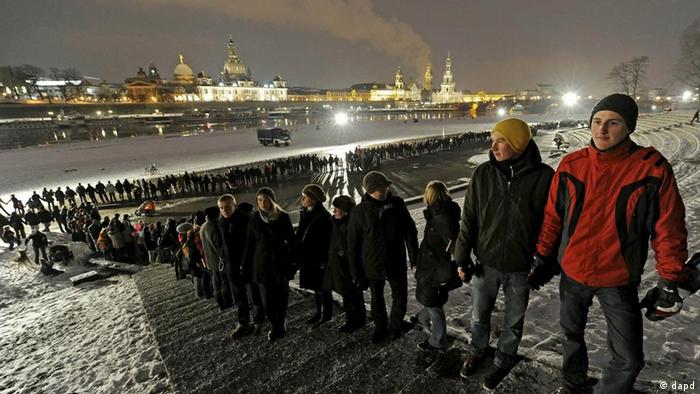 More than 10,000 people came together to form a human chain

At the same time as the ceremony at the cemetery, an impressive demonstration was under way in Dresden's historic center. As in past years, more than 10,000 people came together to form a human chain in protest against the neo-Nazi march.

At 6 p.m., all the church bells in the city started to ring for 10 minutes, and people took each other's hands and remembered. Thousands of candles were lit in front of the Frauenkirche, the city's landmark church destroyed in the war and only just rebuilt in 2005.

This year, there was a palpable sense of how the people of this city are struggling with the Nazi past and looking for a future without the neo-Nazis. The so-called funeral march staged by the extremists has damaged the city's image, but the citizens are no longer willing to accept it.

With a quiet but powerful commemoration, the city seems to have found its way out of the disaster of the 2011 clashes.

Thousands commemorated the bombing of Dresden and spoke against far-right extremism on Monday, the anniversary of the Allied air assault that devastated the eastern city. Police escorted a march of up to 1,600 neo-Nazis. (13.02.2012)

Fewer right-wing extremists than expected marched in Dresden on the 67th anniversary of the city's destruction; but 13,000 gathered for a human chain of tolerance in the afternoon. (13.02.2012)

Protests break out at neo-Nazi march in Dresden

Clashes have broken out in Dresden after thousands gathered to protest against an authorized neo-Nazi march. The demonstration is the second in as many weeks and commemorates the infamous 1945 allied bombing of Dresden. (19.02.2011)