Drastic drop in Sharm el-Sheikh tourism after crash of Russian jet | Middle East | News and analysis of events in the Arab world | DW | 22.11.2015

After a plane carrying Russian holidaymakers crashed from the sky last month, tour operators rushed to evacuate tourists and suspended flights. Naomi Conrad reports from a town desperately hoping for a tourism revival. 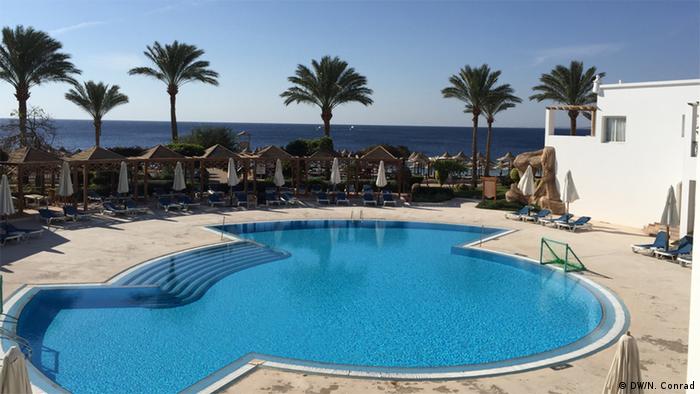 On a balmy evening in Sharm el-Sheikh, Ali despondently surveyed his tiny, mirror-lined shop, its shelves neatly stacked with gold-painted plastic pyramids and dusty bottles of perfume. Later that night, he said, his voice strained, he would carefully lock the door and then board a bus to join his family in Cairo.

He was sad to leave, he told DW quietly, but he simply didn't have a choice: The shy 29-year-old father of two, sporting a luminously green shirt and jeans, hadn't sold a single one of his tacky goods in the last two weeks and couldn't afford to stay in Sharm el-Sheikh, his home for the last two years, any longer. 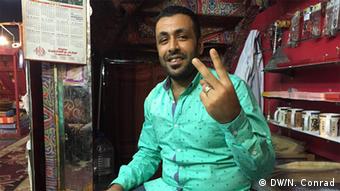 With tourism down, Ali can't afford to stay in Sharm el-Sheikh

He'll be joining a steady stream of diving instructors, waiters and pool boys who have left the Red Sea beach resort in recent weeks, ever since a Russian passenger jet carrying 224 people crashed shortly after leaving Sharm el-Sheikh airport on October 31.

The self-proclaimed "Islamic State" has claimed responsibility, saying its militants smuggled a bomb onto the aircraft in a soft drink can.

Britain and Russia, whose nationals make up the bulk of tourists in Sharm el-Sheikh, suspended all flights. On the once busy runway of the small airport, few planes now land, including the odd direct flights from Ukraine and Italy.

The impact on Sharm el-Sheikh, a seaside town made up of luxury, all-inclusive beach resorts, restaurants and shopping arcades that was founded to cater to the needs of wealthy foreign tourists, has been devastating - and everyone DW spoke to agreed that this is worst downturn in recent decades, years that have seen the industry recover after previous terrorist attacks and world economic crises. 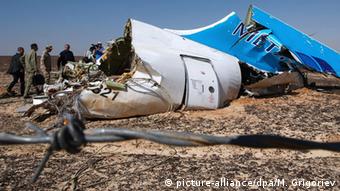 Many usually heaving beaches are nearly deserted, but for the odd tourist spoilt for choice when it came to deck chairs. One hotel owner told DW that his occupancy rate was down from the usual 600 to 45.

In the harbor, the bored-looking owner of a small shop selling snacks and drinks dozed behind his counter, while the boats that normally take tourists out for snorkeling and diving tours bobbed in the bay.

Standing on the pier, Ramy Youssry, an outgoing, cheerful 37-year-old with the tan of those who live under the sun all year long, said his diving business could survive another three months. "To be honest, I don't know what will happen after that."

Russia says a bomb exploded on the Metrojet plane over Sinai, after traces of explosives were found in the wreckage. As Kristen McTighe reports, the shadowy Sinai Province of the Islamic State is the likely perpetrator. (17.11.2015)

A top Kremlin official has said that Russia's ban on Egypt-bound flights will likely remain for 'several months.' The British FM said the UK took a similar decision after examining footage from Sharm el-Sheikh airport. (11.11.2015)

British plane 'almost hit by missile in Egypt in August'

A Thomson Airways flight, bound for the Egyptian resort of Sharm el-Sheikh, was forced to dodge a rocket in August, British newspapers have reported. The passengers were not informed. (07.11.2015)

While his two young daughters are delighted to be seeing more of their father during what is normally the high season for sun-deprived Northern Europeans and Russians, Youssry is concerned. He's losing $600 (about 560 euros) a day, and had to send more than half of his employees on an extended holiday.

But, he said, he was hopeful that tourists would return one day. It's only a matter of time, he told DW, until the memory of the crash has faded and tourists returned.

The government, which relies on tourism revenues as a vital source of foreign currency after years of economic and political instability following the 2011 uprising that ousted former strongman President Hosni Mubarak, is trying to achieve just that.

On a VIP platform overlooking a bustling square decked out in sparkling lights, the governor of South Sinai shouted to make himself heard above the fireworks and din of a Ukrainian band flown in for the occasion by one of the luxury hotels hoping to boost revenue. Tourists decked out in low-cut dresses and impossibly high heels danced to the music, alongside local families pushing their prams.

All was being done, Governor Khaled Fouda said tersely, to send a positive message to the world - and increase security. "We are working closely with our friends to improve security at the airport," he said. Measures would include increased cooperation with foreign countries, such as training security officers. "We understand that our friends are concerned about their citizens and want to guarantee their security. That is why we are cooperating with them."

The government has also started a PR campaign abroad, such as flying a Saudi Arabian delegation to Sharm el-Sheikh, and is attempting to boost domestic tourism. 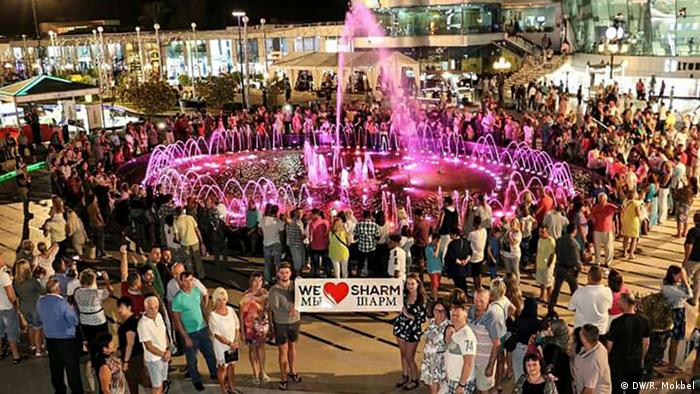 The local government is hoping to help the struggling industry

But local tour operators agree that these are mere stopgap measures to keep the industry afloat until flights resume and foreign tourists start streaming back.

At a beach overlooking a picture-perfect turquoise bay, Sciavetia Bruha, a cheerful busty Italian woman, laughed. The flight from Italy had been almost completely empty, she said, but she for one was not scared. "Why should I be? It's beautiful here, the people are friendly, the weather's perfect," she said. She felt perfectly safe, she added, as the friend at her side nodded in agreement.

Ali for one, is praying that more foreigners put their fears behind them - so he can return to his souvenir shop one day. "Before," he said, referring to the plane crash, "everything was perfect. People from all over the world would come to my shop."

He looked forlorn as he glanced around his shop. "I fear for my children's future." After a short pause he added: "And for Egypt's."

Julian Assange could serve sentence in Australia if convicted, US says