Up to 40 migrants are reported to have drowned after a rubber boat they were traveling on appeared to lose air. Almost 200 other fellow migrants who witnessed the tragedy have arrived in Italy. 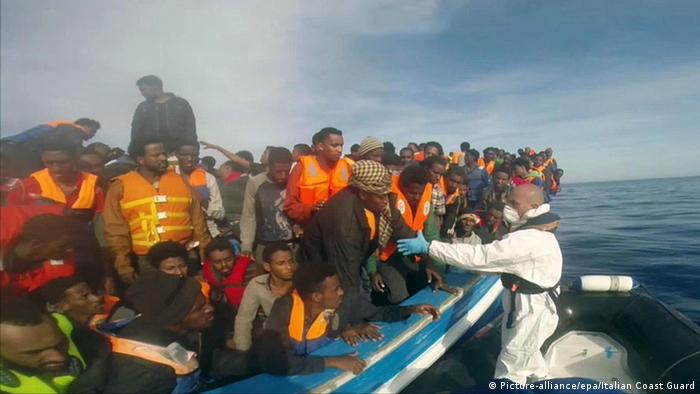 Migrants who arrived on the island of Sicily Tuesday said about 40 others, who had been traveling in a rubber boat alongside them, had fallen into the sea.

According to the charity Save the Children, some 194 survivors arrived on the Italian island. They said the drownings had happened early Sunday when one of the boats appeared to explode or burst in the heat of the sun.

Those who did arrive did so aboard the cargo ship Zeran, which also carried five bodies.

Speaking from Catania, Sicily, the charity's Giovanna di Benedetto said the exact toll wasn't known, but that survivors reported that many people fell into the sea and were not able to swim.

There was a dramatic increase in rescues at the weekend as smugglers in Libya sought to take advantage of calm seas and warm weather. Would-be refugees were sent out into the Mediterranean in overloaded rubber boats and fishing vessels, with the Italian Coast Guard reporting that it rescued some 7,000 in the three days to Sunday.

Baby born on board

More than 3,000 migrants landed in southern Italian ports Monday, including a baby girl who was born on board the Italian navy patrol ship Bettica.

Since the deaths of an estimated 800 people who drowned in a single incident last month off the coast of Libya, the European Union held an emergency summit. Individual member states agreed to contribute more vessels and patrol aircraft to the rescue efforts.

The EU has said it will target the types of larger vessels used by smugglers before they are used, possibly by military means. However, observers have questioned how they will be able to crack down on smugglers using rubber boats, which are easy to deploy discreetly.

More than 1,750 people are estimated to have drowned at sea between Libya and Italy since the start of this year.

Ahead of a refugee summit in Berlin, the German government announced that it's expecting asylum applications to reach 400,000 in 2015 nearly double compared to 2014. State governments expressed concern over the forecast. (05.05.2015)