More than 30 civilians, said to be workers at a bottling factory, have been killed in a Saudi-led airstrike on Yemen. Meanwhile, unknown gunmen have assassinated the head of security in the port city of Aden. 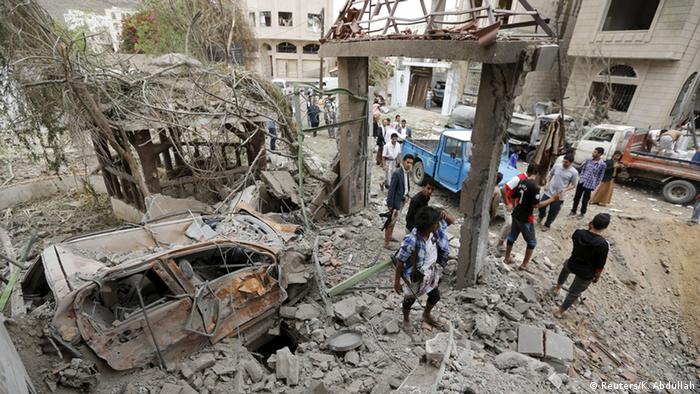 Medical officials and local witnesses said warplanes from the Saudi-led coalition bombed the bottled water plant in the rebel-controlled province of Hajjah on Sunday morning.

"The corpses of 36 workers, many of them burnt or in pieces, were pulled out after an air strike hit the plant," local resident Issa Ahmed told Reuters.

"We got very accurate information about this position and attacked it. It is not a bottling factory," he said.

Coalition airstrikes also hit a military base and technical school in the town, as well as a residential building in the Yemeni capital, Sanaa, officials said.

Saudi Arabia and a group of mainly Gulf allies have been carrying out airstrikes against the Shiite Houthi rebels since March. The coalition's aim is to drive back the rebels and reinstall internationally recognized President Abed Rabbo Mansour Hadi, who is in exile in Saudi Arabia.

The Houthis, fighting with a loose alliance of militias and troops loyal to former President Ali Abdullah Saleh, have sought to expand their control southwards from their northern base. They run Sanaa, but have been expelled from most of the south, including the second largest city, Aden.

Saudi-led airstrikes last week killed 65 civilians in the southwest city of Taiz. Another attack on a dairy plant in the Red Sea port city of Hodeida in April left 35 civilians dead.

According to the United Nations, more than 4,300 people have been killed in the Yemen conflict since March. The violence has also prevented the delivery of aid and vital food supplies, with the World Food Programme warning the impoverished Arab state is on the brink of famine.

Also on Sunday, unknown gunmen shot and killed a senior security official in the southern city of Aden. Officials say the local director of security, Col. Abdelhakim al-Sanidi, was gunned down in a busy street in the al-Mansoura neighborhood.

There were no immediate claims of responsibility, but there has been a growing power vacuum in the city after pro-government forces drove the Houthis out last month. Police have since reported that hundreds of al Qaeda militants and Islamic extremists have moved into the city, taking advantage of the weak security situation.

The explosion destroyed the secret police headquarters in Yemen's second largest city, but no injuries were reported. Fighting has also intensified in Taiz, leaving dozens dead and hospitals overrun. (22.08.2015)