Dozens dead after explosions near Besiktas stadium in Istanbul

At least 29 people have been killed after two bombs exploded near a sports stadium in Istanbul. One of the blasts is suspected to have been a suicide bomb. 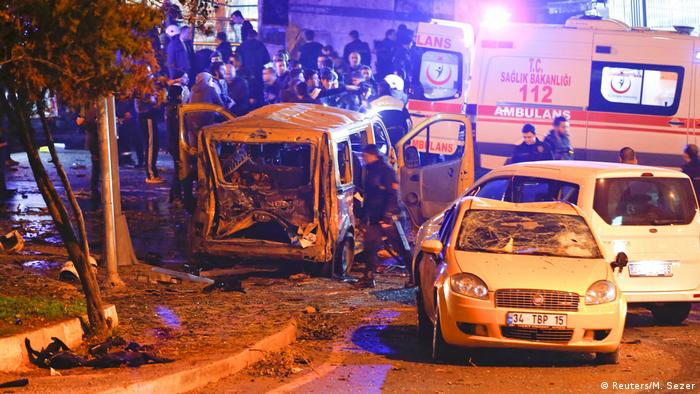 The two explosions, believed to be a car bomb and a suicide bomb, exploded at about 10.30pm on Saturday outside the newly-constructed Vodafone Arena Stadium, also known as Besiktas Stadium, in the European side of the city.

Minister Soylu said arrests had been made, but more details were not given.

President Recep Tayyip Erdogan released a statement saying the deadly attack targeted police and civilians, and aimed to maximize casualties. He did not confirm the death toll.

"A terrorist attack has been carried out against our security forces and our citizens," he wrote.

"As a result of these attacks unfortunately we have martyrs and wounded."

A video uploaded to YouTube purported to show the blast from the eastern bank of the Bosphorus.

Turkish journalist Ezgi Basaran tweeted a picture of debris from the scene.

"It is thought to be a car bomb at a point where our special forces police were located, right after the match at the exit where Bursaspor fans exited, after the fans had left," Turkey's state-run Anadolu Agency quoted Soylu as saying.

He later told reporters in Istanbul the first, larger explosion happened on a hill overlooking the stadium and the second struck Macka Park.

"It was like hell. The flames went all the way up to the sky. I was drinking tea at the cafe next to the mosque," Omer Yilmaz, who works at the neighboring Dolmabahce mosque, told Reuters.

"People ducked under the tables, women began crying. Football fans drinking tea at the cafe sought shelter, it was horrible." 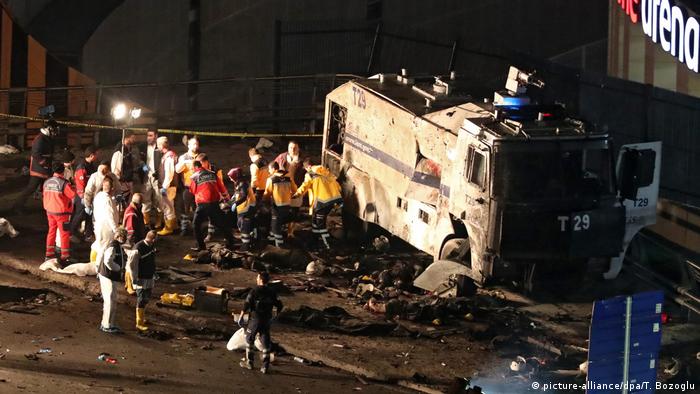 Pictures showed body bags at the scene of the attacks

Witnesses said they heard gunfire after the explosions.

Local TV stations showed more than a dozen ambulances at the stadium and a police helicopter flying overhead with its searchlights on. 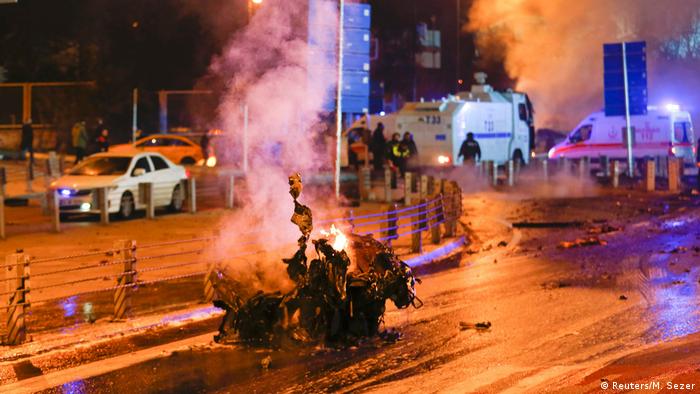 The sound of gunfire could be heard after the explosions

The Besiktas sports club, who were playing visiting team Bursaspor at the stadium earlier on Saturday, "strongly condemned" terrorism and the attack in a statement.

Bursaspor said none of its fans were wounded and wished "a speedy recovery to our wounded citizens."

It said "to avoid broadcasts that can result in public fear, panic or chaos, or that will serve the aims of terrorist organizations."

Media blackouts are common after such attacks in Turkey.

No groups claimed responsibility for the blasts. 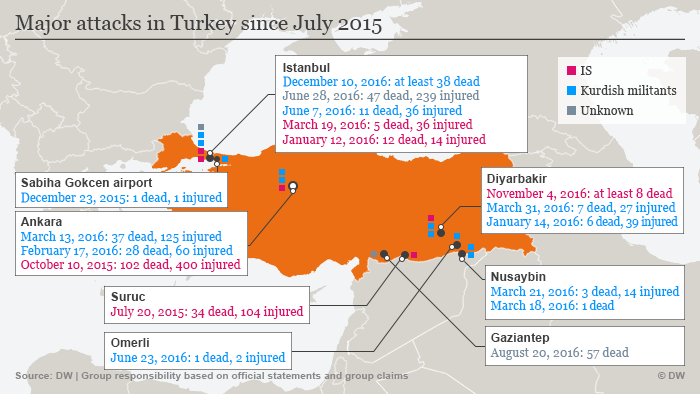 Erdogan's ruling AKP party today lodged a constitutional reform bill that would expand his powers and that critics said would weaken democratic checks and balances.

The clean-up continues at Istanbul's Ataturk airport after assailants detonated explosives claiming at least 41 lives in a city caught up in a spate of terror attacks. Tom Stevenson reports from Istanbul. (29.06.2016)