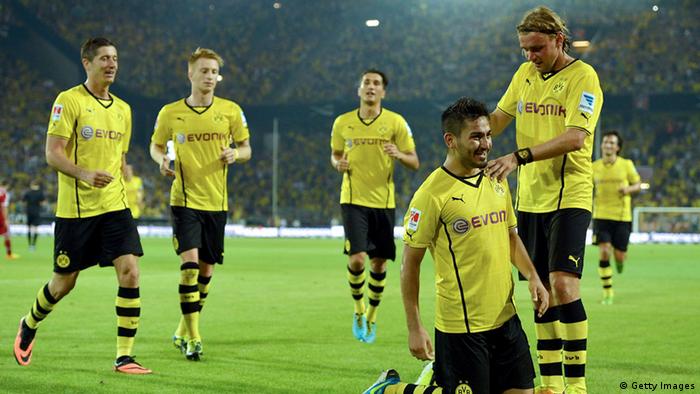 Standing at the end of a propitious chain of mistakes, Marco Reus headed the ball into Bayern's net just six minutes into the match, providing an early lead over the Bundesliga champions that would ultimately carry Dortmund to the end.

It all began with Bayern's Daniel van Buyten who moved too slow, giving Robert Lewandowski the opportunity to shoot a cross to Sven Bender, who headed the ball toward the goal. But goalkeeper Tom Starke was unable to control the weak attempt, giving Reus the opportunity to head the ball into the net. Just two minutes later, Lewandowski brought the ball again to Bayern's goal, but was called off for being just barely offside.

Bayern quickly struck back, with Xherdan Shaqiri shooting from 25 meters, but Dortmund goalkeeper Roman Weidenfeller held his ground. Shortly thereafter, the Swiss international was again at the goal, this time shooting from close distance. But Weidenfeller managed to deflect with his foot.

Dortmund's second attempt came when Reus passed from the right to Lewandowski, but the Polish international failed to sink the shot from six meters.

Own goal by Van Buyten

The second half opened with a lightening quick series of goals. Shortly after half time, Arjen Robben equalized for Bayern with a header. But the scoreline didn't hold for long, with van Buyten knocking in an own goal, returning the lead to his opponents. Then just two minutes later, Ilkay Gündogan tricked out Thomas Müller, shooting the ball past the goalkeeper to solidify a 3-1 lead over Bayern.

But Robben wasn't having it. Off a cross from Phillip Lahm, the Dutch international took the ball with his back to the goal, quickly turning around and shooting to narrow margin in Bayern's favor.

Bayern's attempt to close the gap, however, was ultimately in vain. Reus shot off of a pass from Pierre-Emerick Aubameyang, putting the final score at 4-2 for Dortmund.

Bayern Munich won the all-German Champions League final against Borussia Dortmund - and that was the only conceivable outcome. Or was it? DW's Joscha Weber writes that the Wembley final had two winners. (27.05.2013)