Donetsk separatists: ′We′ll stay until victory′ | Europe| News and current affairs from around the continent | DW | 19.04.2014

Pro-Russian activists in eastern Ukraine are refusing to accept an international deal struck in Geneva on Thursday. Instead, they've placed new demands on the government in Kyiv. The city of Donetsk remains on edge. 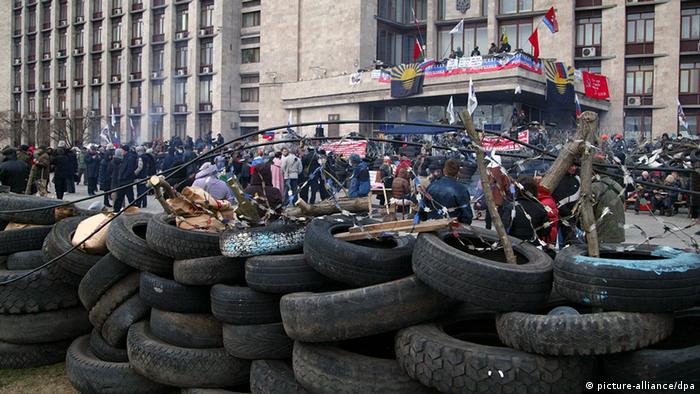 Tensions remain high over in eastern Ukraine over Easter, as pro-Russian activists show no sign of leaving occupied buildings. In the protest hub Donetsk, the regional administration building in the city center was taken over by separatists in early April. Now, Russian flags flap loudly in the wind at the top of the high-rise office.

The property is surrounded by barricades made of stacked car tires and construction scraps. A few hundred people, mostly elderly men and women, stand in the forecourt, warming themselves in the sun. A woman hands out pieces of home-made Easter raisin cake, while popular Soviet era hits blare from the speakers. These protesters, in their self proclaimed "People's Republic of Donetsk," are here for the long haul.

Yet under the agreement adopted this week in Geneva, activists must lay down their weapons and leave occupied buildings. Representatives from Ukraine, Russia, the European Union and the United States met on Thursday (17.04.2014) to try and ease the situation in Ukraine. At the talks, they agreed that all illegal military organizations inside Ukraine are to be disarmed and dissolved. 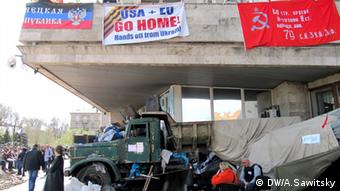 Protesters' signs make their response to the Geneva deal clear

Separatist leaders in Donetsk have made it clear they don't think much of the deal. They've come up with their own set of demands, including the withdrawal of the Ukrainian army, and the resignation of the government in Kyiv. At a press conference, a separatist spokesman denied activists were using weapons. "We are peaceful protesters," he said.

But he can't speak for all protesters in eastern Ukraine. In other parts of the Donbas coal mining basin, masked gunmen have taken over police stations and administrative buildings by force.

Many protesters view the Geneva plan with scorn. "We'll stay until victory," proclaims a woman in her fifties, firing up the crowd from the forecourt's stage. "We want a referendum on accession to Russia, just like in Crimea," she says. "I pray to God that we'll be able to have a referendum at the beginning of May."

The fact that the vote wouldn't have a legal basis or be sanctioned by the government in Kyiv doesn't appear to bother her. "It'll happen," she says with a twinkle in her eye.

Not all protesters, however, want the region to be absorbed into Russia. Some are just campaigning for more autonomy within Ukraine. Various handwritten posters pinned up along the barricades display messages like, "We stand for a Donetsk in a federal Ukraine." Others call for "a return to Russia."

Due in part to divisions among the activists, few people on the streets of Donetsk have a clear idea of what should happen next. "We've arrived at a point where the situation could change quickly and go either way," says Volodymyr Kipen, a political analyst based at Donetsk National University.

According to a recent survey conducted by his research institute, around two thirds of people in the city of Donetsk want the region to remain part of Ukraine. About a quarter think it should become part of Russia. 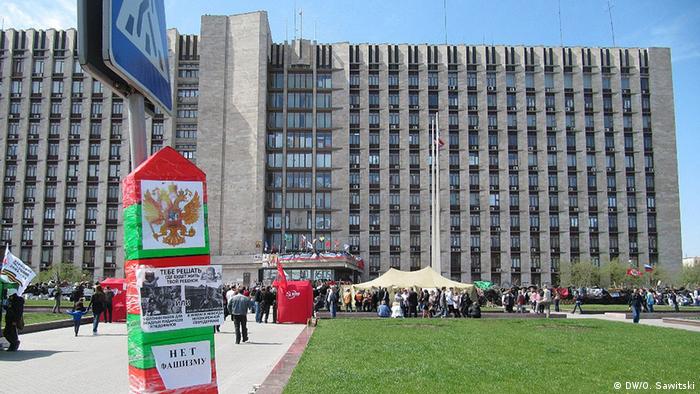 Separatists say they won't budge until their demands are met

There were also other, more concerning findings, says Kipen. "Around 20 percent of respondents told us they would welcome Russian troops in Donetsk." And just as many, about one in five, said they would fight the Russians in the event of an invasion. The mood is "very strongly polarized" and bears the potential for civil war, he says.

One can assume the Ukrainian government is aware of this divide, offering a plausible explanation for why it hasn't sent troops to force activists from the occupied buildings in Donetsk. Despite the international agreement, the protesters say they aren't going anywhere for the time being.

The rebels continue to insist they aren't going anywhere, and some plan to celebrate Easter within the walls of the structures they have taken over.

In east Ukraine, a pro-Russian group has declared an independent republic from within an occupied building in Donetsk. DW heads inside to hear from leaders and gauge local moods for a planned referendum in May. (18.04.2014)

US ramps up pressure on Russia as Ukraine separatists sit tight

The US has warned Russia of further sanctions unless it helps convince Ukrainian separatists to leave government buildings. They have so far ignored the terms of a deal to de-escalate the crisis and refused to budge. (19.04.2014)