President Donald Trump has said talks between the United States and North Korea will in fact take place on June 12. The announcement comes after Trump met with North Korean envoy Kim Yong Chol. 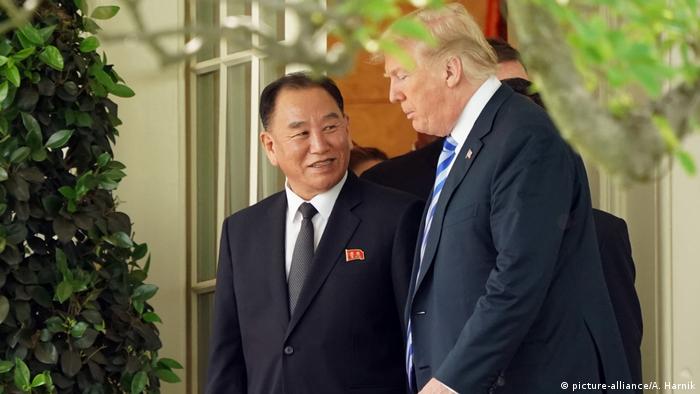 US President Donald Trump on Friday said a summit between North Korea and the US will be held on June 12 as originally planned.

Following a meeting with Kim Yong Chol in the Oval Office, Trump said he would be making a mistake not to go forward with the on-again, off-again nuclear summit in Singapore, and called the meeting, "a great start."

The encounter, which was expected to be brief, lasted more than an hour.

"We're going to deal," Trump told reporters, adding that it was likely that more than one meeting would be necessary. "I think you're going to have a very positive result in the end. We will see what we will see."

Trump said he believed Kim Jong Un wanted to denuclearize and that a relationship between North Korea and the US would start on June 12. "I think it's probably going to be a very successful, ultimately a successful process," he said.

He said the US had hundreds of new sanctions ready to impose on North Korea but that they would be withheld as long as denuclearization talks continued. He added that he looked forward to the day when sanctions on North Korea could be lifted.

"I don't even want to use the term 'maximum pressure' anymore," Trump said, using his preferred term for the harsh US economic sanctions against North Korea.

'Moving in the right direction'

The delivery of the letter came after Secretary of State Mike Pompeo held talks on Thursday with the North Korean envoy in New York in an attempt to revive the June 12 summit.

Following the talks on Thursday, Pompeo had said he was confident negotiations with Pyongyang were "moving in the right direction."

"Our two countries face a pivotal moment in our relationship, and it would be nothing short of tragic to let this opportunity go to waste," Pompeo said after meeting with Kim.

Kim is the most senior North Korean visitor to the US since Vice Marshal Jo Myong Rok visited Washington in 2000 to meet President Bill Clinton.

Trump said North Korea's record on human rights was not talked about at the meeting.

Mattis: US troops in S. Korea not up for discussion

The US troop presence in South Korea is not on the table for discussion with North Korea at the June 12 summit, US Defense Secretary Jim Mattis said on Saturday.

Mattis told the Shangri-La Dialogue, a high-profile international security summit in Singapore, that the US military continued to support diplomats who were working toward the "complete, verifiable an irreversible" denuclearization of the Korean peninsula.

He said that if diplomacy with North Korea worked, the issue of troop levels could be raised, but only in talks between the US and South Korea.

Should the world be worried about comments made by North Korean leader Kim Jong Un signaling an apparent change in nuclear doctrine from the secretive dictatorship?