The US president met the plane bearing the three ex-prisoners of Pyongyang as it arrived in the DC area. North Korea's release of the US citizens has come amid preparations for a summit between Trump and Kim Jong Un. 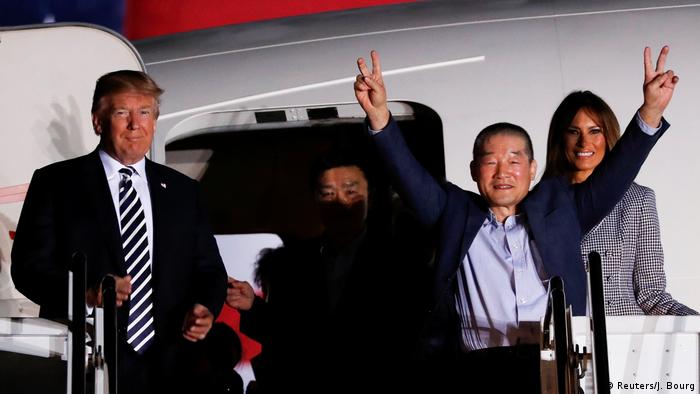 US President Donald Trump was present and waiting to greet the three former prisoners of North Korea in the early hours of Thursday as they landed at the Andrews Air Force base in the Washington, DC area.

The American men had been freed by Pyongyang one day earlier.  The White House called the release a "positive gesture of good will" in preparation for Trump's meeting with North Korean leader Kim Jong Un.

US Secretary of State Mike Pompeo, who had helped secure the prisoners' release, and Vice President Mike Pence, also waited in the darkness at Andrews Air Force Base to welcome the men. First Lady Melania Trump and National Security Adviser John Bolton were also present. 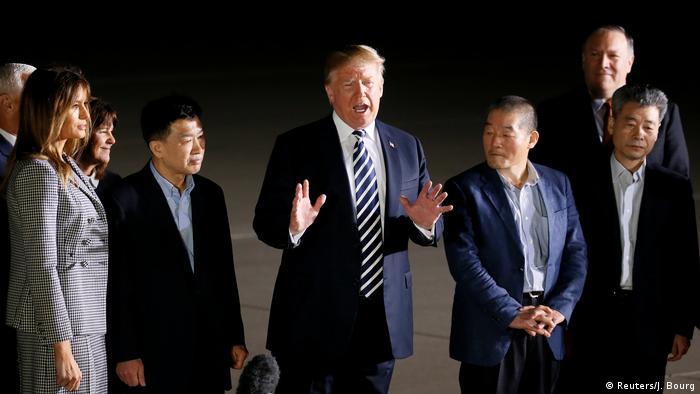 Kim Jong Un 'wants to do something'

The plane bearing the freed prisoners rolled to a stop on the air force base's tarmac under a large American flag around 2:42 a.m. local time (642 UTC) before President Trump and the first lady boarded the plane to greet the men.

The three released detainees smiled and flashed victory signs as they stepped out of the aircraft alongside Trump and his wife. After descending the rolling staircase, they shook hands with the other administration officials.

Trump repeatedly praised the men as "great people" the to the assembled press. "Congratulations on being in this country," he added.

He also alluded to his upcoming summit with Kim Jong Un, stating that a meeting and location had been scheduled. The president said that the meeting was "something that many said was not going to happen for many, many years" and added that a further announcement would be forthcoming soon.

Trump thanked Kim for releasing the US citizens and said that his greatest honor would be the denuclearization of the Korean peninsula. "I really think [Kim Jong Un] wants to do something," he said of the North Korean leader.

The ex-prisoners, Kim Dong Chul, Kim Hak Song and Tony Kim, were reported to be in good health. The White House said they would be taken to the nearby Walter Reed Military Medical Center.

Speaking to reporters through a Korean interpreter, one of the former prisoners said he had been subjected to forced labor but attended to medically when unwell.

After leaving North Korea, the three US citizens were flown to Japan, where they then boarded a medically-outfitted Boeing for their flight back to the US.

Before landing in DC, the men had touched down on American soil in Alaska for a refueling stop. The US State Department shared a statement from the men expressing gratitude for their release:

The highly public ceremony surrounding the ex-prisoners arrival in DC and Trump's political comments stood in marked contrast to the the State Department's earlier efforts to keep the three men sheltered from the press and even from other US officials.

Release as preparations for summit underway

North Korea's unannounced release of the three prisoners coincided with a visit by Secretary of State Pompeo to the internationally isolated nation. Pompeo met with Kim Jong Un to arrange the final details for a highly anticipated meeting between the North Korean leader and President Trump that is expected to take place in Singapore in late May or early June.

North Korea had accused the three Korean-American men of anti-state activities. Their detention, which had lasted between one to two years, was seen as a politically motivated move that added to the tension stemming from Kim Jong Un's persistent pursual of nuclear activites.

The Trump-Kim summit, and North Korea's avowal that it is committed to "complete denuclearization," have been viewed by some as a breakthrough in the two leader's standoff over North Korea's nuclear program that dominated the early portion of Trump's presidency. However, others have reacted more cautiously over Pyongyang's ultimate intentions.

The meeting between Donald Trump's nominee for secretary of state and Kim Jong Un raises the stakes for potential future talks, a former Pentagon official says. A big issue will be that of American prisoners. (18.04.2018)