The US president backtracked on a plan announced just days earlier to host the G7 summit at a Trump-owned resort in Miami. Critics asserted that the president sought to enrich himself by hosting foreign leaders. 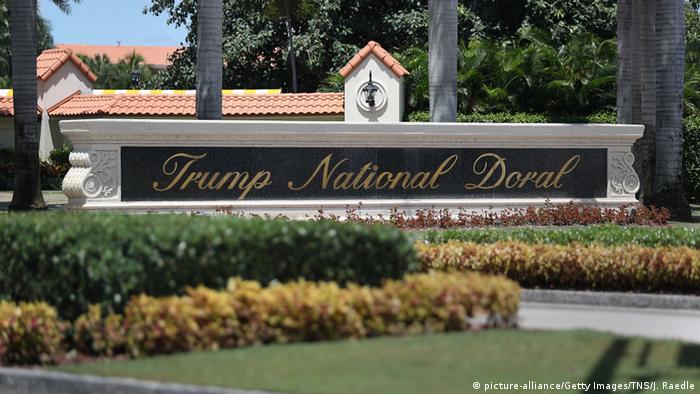 US President Donald Trump on Saturday abandoned plans to host the next G7 summit at his own golf resort in Florida after coming under fire from Democrats as well as Republicans and other critics who said he sought to personally profit from his presidency.

Acting White House chief of staff Mick Mulvaney had announced Thursday that the president planned to host the summit of industrialized nations at his Doral Golf Club in Miami because it was the "best place" among a dozen locations in the United States considered for the June 10-12 gathering next year.

"I thought I was doing something very good for our Country by using Trump National Doral, in Miami, for hosting the G-7 Leaders. It is big, grand, on hundreds of acres, next to MIAMI INTERNATIONAL AIRPORT, has tremendous ballrooms & meeting rooms, and each delegation would have its own 50 to 70 unit building," Trump wrote on Twitter, rehashing arguments made previously.

"Would set up better than other alternatives. I announced that I would be willing to do it at NO PROFIT or, if legally permissible, at ZERO COST to the USA. But, as usual, the Hostile Media & their Democrat Partners went CRAZY!" he continued.

"Therefore, based on both Media & Democrat Crazed and Irrational Hostility, we will no longer consider Trump National Doral, Miami, as the Host Site for the G-7 in 2020. We will begin the search for another site, including the possibility of Camp David, immediately. Thank you!" he said in announcing the reversal.

The three tweets were sent over a span of 34 minutes and broken up by a post linking to a Fox News video.

Critics said holding the G7 summit at Trump's own golf resort would violate the Constitution's emoluments clauses that prevent government officials from receiving salaries, fees or profits from foreign and domestic governments without congressional approval.

The Democratic-controlled House of Representatives on Friday introduced legislation to block Trump's plan, in a move that would have likely faced an uphill battle in the Republican-controlled Senate.

In addition to an impeachment inquiry, Trump also faces a number of congressional investigations over his finances and potential conflicts of interest stemming from his real estate business, which he still owns.

The president has said that he is not involved with the operations of the Trump Organization and that his sons run the business.

Trump has repeatedly accused the family of Democratic presidential hopeful Joe Biden of profiting from public office because of Hunter Biden's business activities in Ukraine when his father was vice president. The president faces an impeachment probe over allegations that he pressured Ukraine's president to investigate his political rival.

Next year, the US takes on the rotating presidency of the G7, which includes the US, Germany, Britain, France, Italy, Canada and Japan.

The US House Intelligence Committee chair says Democrats have made "dramatic progress" in their impeachment investigation. Both the vice president and the president's personal lawyer say they won't comply with the probe. (16.10.2019)

G7 summit in Biarritz winds down after three days of talks

Iran, trade and the Amazonian wildfires have dominated discussions at the summit of the group of advanced industrialized economies. Here are the key developments from the final day of the G7 meeting in Biarritz. (26.08.2019)

A group of lawyers has filed a federal lawsuit against President Donald Trump for allowing his businesses to accept payments from foreign governments. They argue this effectively violates the US constitution. (23.01.2017)