Does Japan want citizens to be nationalist or international? | Asia | An in-depth look at news from across the continent | DW | 16.10.2014

While the Japanese government says it wants more students to study overseas to develop different perspectives, text books at home are taking a more conservative and patriotic line. DW examines. 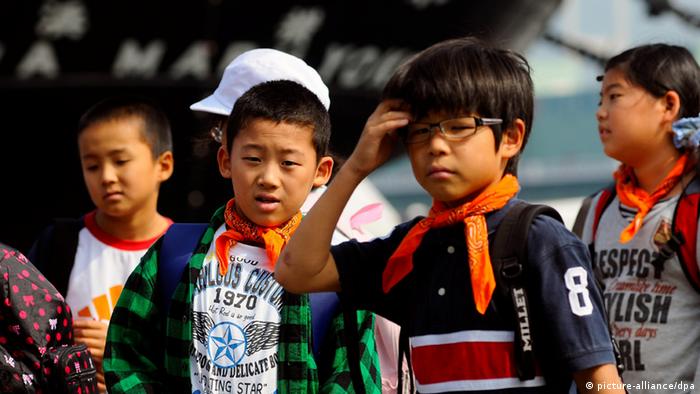 In an attempt to offer future generations the skills that are "more suited for practical use," Japanese Prime Minister Shinzo Abe outlined plans in April this year to reform English-language education in the country. He also expressed his desire to see more Japanese students spending time at educational institutions overseas, and more foreign students opting to study in Japan.

Addressing a press conference in Tokyo to announce plans to send 3,000 assistant Japanese language teachers to member states of the Association of Southeast Asian Nations from 2020 - a 296 million USD initiative - the Japanese leader said he hoped the program would build new links across the region.

"I hope the younger generations in Japan and other Asian countries will be tied through sympathy and friendship, have the same dreams for the future and begin the next stage," Abe said in April. 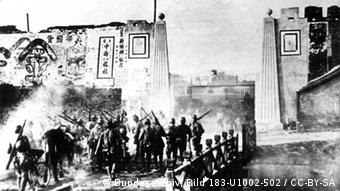 Making Japan's education increasingly international and outward-looking has been a recurring theme since Abe swept back into power in December 2012, but critics point out that it clashes badly with the ruling Liberal Democratic Party's desire to develop a sense of national pride through education.

And that conservative agenda includes toning down descriptions in history text books, for example, about the Nanking massacre, Japan's responsibility for the Pacific War and the forcing of thousands of women from across Asia into sexual slavery for the Japanese military in the early decades of the last century.

"Local boards of education screen and select the books that are used in junior and senior high schools across Japan, giving them effectively complete control over what children learn," Makoto Watanabe, lecturer in communications and media at Hokkaido Bunkyo University, told DW.

"And those boards of education are traditionally dominated by conservatives who have come through the same education system and want to continue it," he added.

Teachers at those levels are therefore under great pressure to stick very closely to what they are permitted to teach, said Watanabe, who believes there will be increased pressure in the future, from the government through the education ministry and the boards of education.

Since taking office in December 2012, Shinzo Abe has already visited 49 countries - the most for any Japanese prime minister. But how effective have the diplomatic efforts been? DW speaks to analyst James Schoff. (11.09.2014)

Japan's economy lost steam in the second quarter of 2014 and output contracted sharply. Analysts blame the slump largely on a national sales tax hike, but disagree over how to boost long-term growth in the Asian country. (09.09.2014)

"So instead of learning about the importance of freedom of speech and independent thinking, as well as developing an international mind-set, the education will become even narrower," Makoto Watanabe stressed.

The broader problem with Japan's education system is that the entire system of teaching languages - and therefore giving students the tools to further their education abroad - is inefficient and weak, said Robert Dujarric, director of the Institute of Contemporary Asian Studies at the Japan campus of Temple University.

No signs of change

"Abe says he wants Japan to be more international, but he himself is very domestically focused, and I doubt he has a strong understanding of what 'internationalization' means as he comes from a generation that has never really seen or experienced it," Dujarric told DW, underlining that he sees no signs of the Japanese education system changing anytime soon.

Furthermore, Japanese firms are still very reluctant to hire young people who have lived and studied abroad as they are perceived as being "incompatible with the Japanese corporate structure," said the expert.

Dujarric says Abe is pursuing a "fashionable" agenda of making Japan more international, while at the same time the government and bureaucrats are becoming more inward-looking.

The government's nationalistic agenda is underlined by a number of groups within the country's parliament that have patriotic education system as their raison d'être.

Similarly, claiming that historical events such as the Nanking Massacre and the use of sex slaves have been falsified, the history review committee of Japan's ruling Liberal Democratic Party - of which Abe was a founder member in 1993 - is demanding that Japan's education system should reflect that opinion. 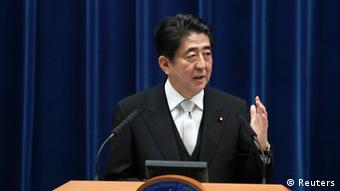 "What the government is doing is self-contradictory," Watanabe said, adding that it is unclear what the administration really wants. "Is it a more nationalistic education or true internationalization?" he asked.

"My feeling is that Abe is purely responding to the needs of big business, which requires well-educated and experienced workers to continue to expand their operations," Watanabe said. "Abe's slogans on education sound like he's doing it for the benefit of young people, but I feel that his priority is keeping big business happy. If it was up to Abe, Watanabe said, I think he would prefer to educate people "to have a deeper nationalistic pride in Japan and to relearn our history."

Itaru Nakamura is the most senior official to step down over the killing of Japan's former prime minister on July 8. He had previously admitted there were faults in the security plan for Abe's protection.