Does Finland show the way to universal basic income? | Business | Economy and finance news from a German perspective | DW | 30.05.2020 A "basic income guinea pig" — that's how Tuomas Muraja describes himself in the title of his book about the two years he received €560 ($616) a month from Finland's government. For four years the journalist had been looking for permanent work, attending job center classes and receiving state benefits alongside the odd freelance job, before he found out he had been selected for the country's universal basic income experiment, which began in 2017.

Muraja fondly remembers being a guinea pig. "It was a great relief because I got rid of all the bureaucracy," he recalls. "I didn't need to fill in any forms or attend any classes where they teach you how to make a CV and these kinds of things. I could concentrate myself on my work, which is writing books and stories."

He certainly did. In those two years he published two books, wrote numerous articles and applied for 80 positions. Others he spoke to for Basic Income Guinea Pig had positive experiences too. One lady set up her own café, knowing she had guaranteed income. A university graduate could take low-paid internships to gain experience without having to worry.

Yet Finland's basic income experiment has not caused a huge surge in support for the idea, either in Finland or abroad. Initial reports branded the scheme a "flop." While recent coverage of the long-term study, released earlier this month, has been more nuanced, much has focused on the minimal effect on employment prospects.

The "flop" tag is something Minne Ylikanno, senior researcher at Finland's Social Insurance Institution (Kela), which carried out the study, rejects. "I would say the experiment was a success," she says. "No other country in any part of the world has implemented a national basic income based on a law."

"It's fair to say that the result is that we can't see a very big employment effect, that's true. But the comment that it's a failure, I would say that's not fair."

The findings were based on comparing the 2,000 unemployed participants who had received the €560 a month from January 2017 to December 2018 with a control group of 173,000 who did not. There was only a small statistical difference between the study group and the control group in the number of people who found work after two years.

Economic benefits could come from wellbeing

Where there was a significant statistical difference, however, was in how happy each of the two groups felt. The people who received €560 a month reported much lower levels of insecurity and stress.

"The wellbeing was at a higher level than in the control group, and it really was a significant increase in most dimensions of wellbeing," reports Ylikanno.

For Tuomas, this should be the point people concentrate on most when examining the study. "The main important thing is that those who received the basic income felt better, mentally. When you are secure and free, you feel better." 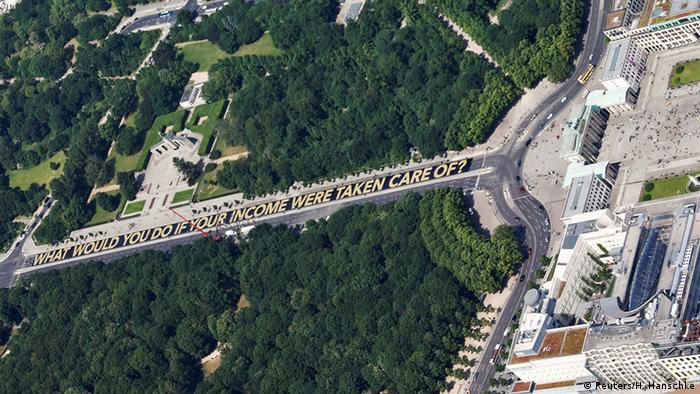 Even if people are looking for economic gains, argues Ylikanno, increasing people's wellbeing is a good place to help long-term unemployed people to find work.

"When wellbeing is on a better level, people have better chances to get a job. Employers see them as more capable of work," she says.

Moving beyond the headline cost

But for governments and politicians examining whether a basic income is worth it, how much the scheme might cost is still the factor they overwhelmingly focus on.

That's a point made by Professor Bernhard Neumärker, director of the Department for Economic Policy at the University of Freiburg and a supporter of universal basic income.

"When it comes to basic income, the science is a long way behind society," he says. "Politicians feel uncertain about it, so find easy arguments, such as saying everyone will become lazy or that there is no way to finance it. Then it's case closed, next topic."

But he argues increasing public pressure could force politicians to begin to think differently about the problem, particularly in the wake of the coronavirus crisis.

"Germany and other EU countries were of the opinion everything was going well without basic income," states Professor Neumärker, "so why have it?"

"Now the crisis has shown things are becoming serious for the traditional and, in my view, outdated social welfare state. I would argue that if we properly organized basic income, then in the face of digitalization, new developments and crises, it is one of the few promising and sustainable models for a modern market economy."

There is still a long way to go from Finland's experiment. New trials will also need to look at larger groups, people already in employment, and take place over a longer period.

But other countries will be able to provide more data. Spain is offering a form of basic income to poorer people who lost work because of coronavirus. Kenya is conducting a 12-year study.

"Finland will go on with experiments in social policy," predicts Muraja, "which is a good thing."

The number of guinea pigs is growing, and so too might be momentum for basic income.

Coronavirus brought with it, albeit temporarily, a greener, simpler way of life. But as economies reboot, will our hopes for lasting change again be supplanted by an obsession for wealth and efficiency? (19.05.2020)

A labor experiment in Germany will see 250 people receive welfare payments with no questions asked for three years. Could it be the first step on the road to a universal basic income? (27.02.2019)