Should only trained pharmacists be allowed to sell pharmaceuticals? Should online pharmacies be prohibited because they can undercut prices and drive out competition? The Doc Morris case has raised tough legal issues. This is an isolated decision by an administrative court, said Doc Morris CEO

A state administrative court in the state of Saarland decided on Wednesday that the Dutch online pharmaceutical company Doc Morris has to shut down its first and only branch in Germany until the European Court of Justice reaches a final verdict on the legality of the business.

After opening in July, a Doc Morris branch in the city of Saarbrücken met with immediate criticism from private pharmacists in the region. They protested the legality of the online discounter on the grounds that they wouldn't be able to match its prices.

Critics also referenced a German law which stipulates that pharmacies may only be run by trained pharmacists, not by corporate entities.

A final decision has yet to be made 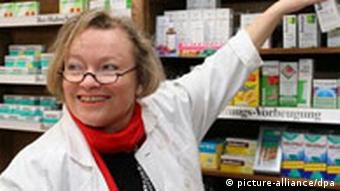 "The pharmacists want to do everything to push us out of the market," said Doc Morris director Ralf Däinghaus.

On Aug. 9 the state court in Saarbrücken rejected petitions for the closure of the German pharmaceutical branch, citing freedom of establishment under European law. Wednesday's decision for its temporary closure was issued because three Saarbrücken pharmacies have filed an appeal.

The European Court of Justice will have to assess the apparent contradiction between Germany's pharmacy law and the European Union's freedom of establishment law.

The state government in Saarland is opposed to the administrative court's decision and has said it considers it legal for Doc Morris to conduct business in Germany.

The news published by the Bild Zeitung this week that a full 18 percent of German men don't feel compelled to change their underwear on a daily basis may be rather shocking, but count your blessings, ladies. (Aug. 11, 2006)

A German court on Wednesday ruled that a Dutch Internet pharmacy can operate a branch in Germany. Critics say that this will hurt the country's high standard for pharmacies. (Aug. 9, 2006)

Germany has been hit by a further rotten meat scandal. A new federal consumer information law intends to help weed out the bad apples. But can stricter controls solve the problem? (Sept. 12, 2006)