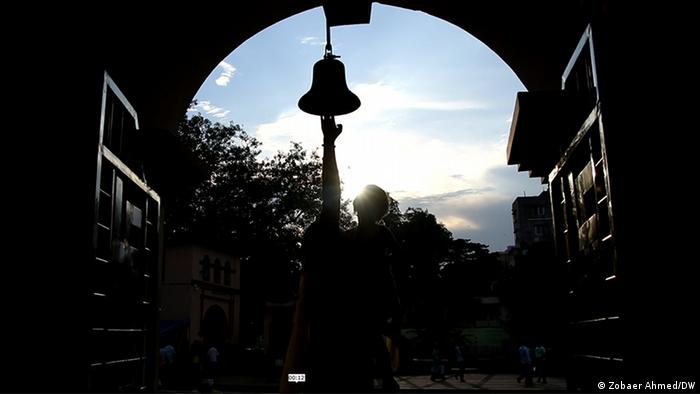 Durga Puja will be celebrated in more than 32,000 temples across Bangladesh this year

The lead-up to Durga Puja, Bangladesh's biggest Hindu festival, is the busiest time of the year for Anil Krishna Pal. The 55-year-old and his team are crafting the structures and idols that are worshiped at temples during the festival. This year he has received 20 orders.

"First, we make this background frame with wood and bamboo. Then we make an idol structure with hay and set it on the frame. After that we start the clay work," Pal told DW.

"It takes eight days to finish the basic structure and the clay work. Then we need two more days to color it," he explained as he showed DW an array of idols.

Pal's workshop is located in the southeastern Bangladeshi city of Cumilla where last year a mob of  angry Muslims attacked Hindu temples during the Durga Puja celebrations.

Widely circulated footage on social media purported to show a copy of the Quran being placed on the lap of the Hindu deity Hanuman.

The video was seen as insulting by many of Bangladesh's Muslim majority and provoked hundreds to protest in more than a dozen districts. Houses belonging to Hindus were attacked and seven people were killed.

The idol that appeared in the footage had been crafted by Anil Krishna Pal.

"I felt very bad. What else could I feel? The idol that I made myself was destroyed — we could not even provide offerings. Isn't it a matter of sorrow? We give blessings and pray to the idol. My heart broke," Pal said.

The incident was later revealed to have been a deliberate ploy to provoke religious tensions.

CCTV footage showed a man placing the Quran on the idol in a temple. He was later arrested. 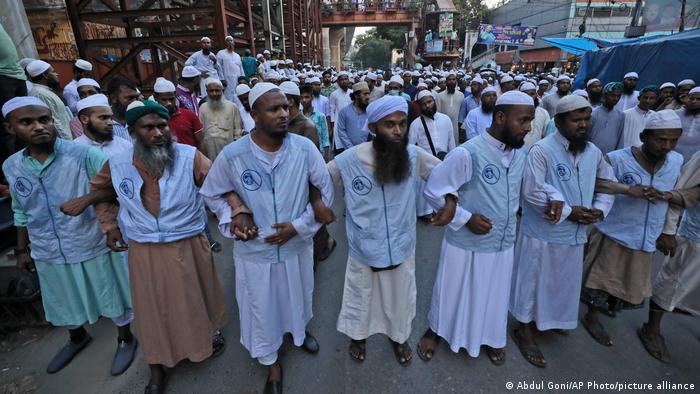 Last year, thousands of Muslims protested during Durga Puja against a video that they perceived as being insulting to Islam

"Our area was the second to get attacked," she told DW. "The young men and women from our neighborhood resisted and protected our temple. Now we have built this gate to stop any unwanted breaking in."

"However, they vandalized other neighborhoods here," Das added.

"The main entrance [of another temple] was destroyed. They vandalized the festive decorations, sound boxes, lights etc. Many people were injured," she said.

Attacks on Hindus and other religious minorities are not uncommon in Bangladesh. According to Ain o Salish Kendra (ASK), a Bangladeshi human rights organization, even before last year's Durga Puja, there had been attacks on more than 100 Hindu homes.

Ratna Das' neighbor, Nipa Pal, said: "My eight-year-old daughter was asking me if there will be any Puja at all? We know we will celebrate the festival, but fear that such a situation might recur." 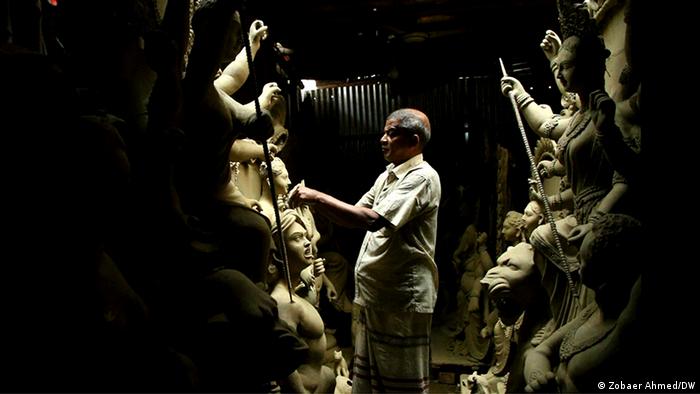 This year's Durga Puja will be celebrated in more than 32,000 temples and makeshift temples across Bangladesh. Authorities have said that they don't expect situations like last year's to occur.

Bangladeshi Home Minister Asaduzzaman Khan Kamal has held meetings with organizers and law enforcement agencies and insisted that security will be increased this year.

"I have asked the organizers to set up CCTV cameras in all the puja pavilions. We will deploy enough police or other law enforcing members," he told reporters.

Bangladeshi police said that they were assessing the risk across the country.

"Our intelligence departments are collecting information so that we can assess the risk level and take measures accordingly."

However, the Puja organizers are not completely satisfied with the current situation.

"We want to go to a societal system where no religious festival will need police security. That was the main meaning of our national independence. Here you will be celebrating Puja under police protection, that does not make any sense," Podder told DW. 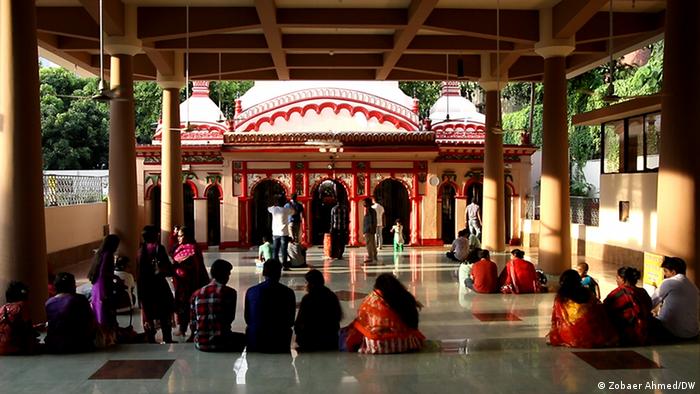 Meanwhile, ahead of Friday prayers at the central mosque in Dhaka, Baitul Mukarram, Muslim clerics preached about social cohesion. They said that Islam did not permit giving pain to the "others."

"Islam says that if there are people from other religions, they should not be harmed by the acts of Muslims," said 20-year-old Islamic student Md. Shahidul Islam. He told DW that no religious values could be imposed on a person of a different belief.

His friend, Ali Hasan, said that he believed that hatred and fighting were not the solution to any misunderstandings. "Our prophet has not taught us to hate people," he told DW.

Meanwhile, the head cleric of Baitul Mukarram called for proper action to prevent crimes against minorities. "The government should ensure that such incidents should not happen again," Hafez Mawlana Mufti Ruhul Amin told DW. "They must take action. They should keep an eye on such perpetrators."

How active is the government?

There seemed to be a general impression that Bangladesh's ruling Awami League got most of the minority votes because it does not lean to the religious far right, even though Hindu leaders have complained that the government has failed to protect them.

"It is very frustrating that the perpetrators go unpunished. So they feel encouraged to stage the attacks one after another," Poddar told DW.

Police filed at least 52 cases following last year's Durga Puja attacks. They also arrested the main suspect and hundreds of others — but cases are still pending.

"We have submitted the investigation reports of most of the cases to the court. Some investigations are still underway," DIG Khan told DW. 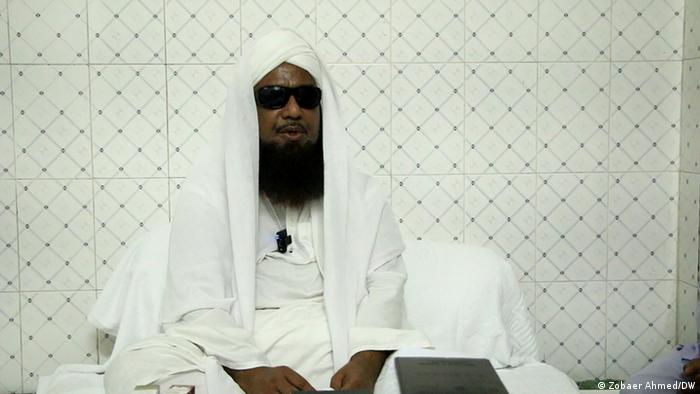 Shahriar Kabir, a Bangladesh-based journalist and researcher on communal conflict, said that the government has to be proactive.

"We have advised [it] to take short-term and long-term measures to make the country safe for the religious minorities," Kabir said.

"In the short term, they have to make sure the victims get justice by punishing the perpetrators. In the long term, we ask them to form a national minority commission or pass a minority protection law."

Back in Cumilla, Ratna Das finished her evening prayers in the temple. In her mind, there was a list of things that she wants to buy for the Puja celebration and a question.

"This is my country. Isn't it weird that I now have to think about safety during Puja?"