A Diego Maradona jersey has fetched more than $9 million at auction in London. Wearing it in the 1986 World Cup quarter-final, Maradona scored arguably the most feted goal ever, and perhaps the most reviled one, too. 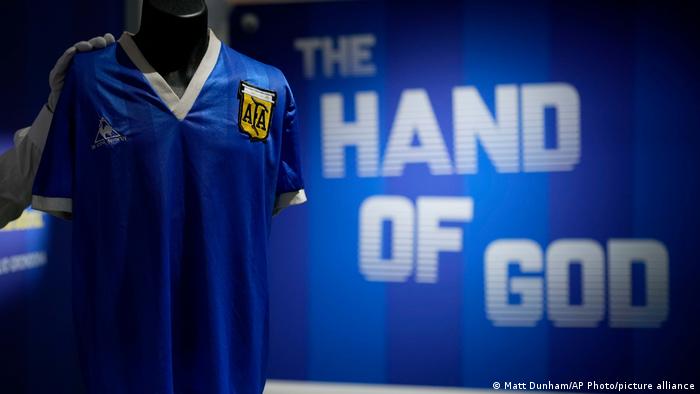 The shirt Diego Maradona was wearing during the 1986 World Cup quarter-final against England has sold for 7.1 million pounds (roughly $9.3 million, or €8.5 million) at Sotheby's auction house in London. It's the highest price ever paid for an item of sports memorabilia.

Sotheby's said the item sold after an online auction that closed on Wednesday. It did not identify the buyer.

Why this particular jersey?

Argentina's game against England in the 1986 World Cup is probably the most famous of their matches en route to lifting the trophy that year, despite not being the decisive final. Certainly it is the most renowned in England to this day.

The first, which leveled the score, was ruled a header, but the referee failed to see that the ball had actually bounced off the tiny attacker's raised fist.

The second goal, meanwhile, was voted FIFA's "goal of the century" in a 2002 poll. Maradona dribbled the ball from deep in his own half past almost the entire England team, rounding goalkeeper Peter Shilton, and sliding the ball into an empty net.

The solo masterstroke was emblematic of a World Cup where Maradona often seemed to be dragging his teammates towards victory single handed.

Meanwhile, the pair of goals viewed together were almost the man himself in microcosm — football's outrageously creative but unbalanced superstar of the 1980s, capable of the impossible on the pitch and prone to self-destruction off it.

The symbolism of the match was all the greater for Argentina and England alike, given that it came four years after the Falklands War, when Argentina invaded the British islands — known as the Malvinas to Argentinians —  in the Atlantic. The UK launched a major military operation to reclaim the overseas territory, which Argentina also lays claim to to this day.

Considered by many the greatest player of all time, Maradona enjoyed hero status at home from 1986 onwards, at the latest. However, his career and later life became tarnished by his struggles with cocaine abuse and other excesses, before he died aged just 60 in 2020.

How did the jersey end up at Sotheby's?

After the game, Maradona swapped shirts with England midfielder Steve Hodge, who had loaned it long-term to England's National Football Museum in Manchester before putting it up for sale.

After Sotheby's announced the sale, Maradona's relatives expressed doubts about its authenticity. However, Sotheby's said a sports memorabilia photo matching company and its own chief science officer were satisfied with its provenance.

The previous sports memorabilia record was $8.8 million paid in 2019 for the manifesto that launched the modern Olympic movement and the 1892 Games. Prior to that, a New York Yankees jersey worn by Babe Ruth fetched $5.64 million, also in 2019.

What happened to football's classic #10