Diaper-free parenting without poo on the couch | Germany| News and in-depth reporting from Berlin and beyond | DW | 02.08.2013

Diaper-free parenting without poo on the couch

Most babies will go through 2,000 to 3,000 diapers before they are potty trained. Some parents in Germany are choosing to largely do away diapers. And somehow they still manage to keep their furniture clean. 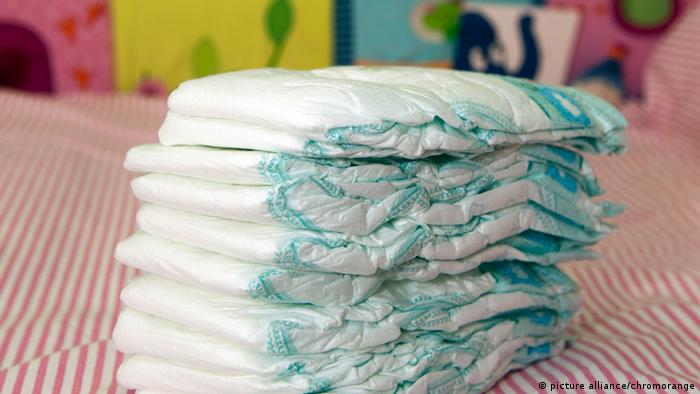 Every morning when 15-month-old Alice wakes up, her mother, 30-year-old Freya Donner, routinely holds her over the bathroom toilet. Alice has been trained to respond to the verbal cue "loo loo." Whether over a training potty, or a bush when they're away from home, Alice delivers on cue.

Donner and her husband are raising their first child diaper free - along with a growing number of parents across Europe, from Finland to Italy.

No diapers, no diaper powder and no diaper bag: "What's wrong with this picture?" you're probably asking. 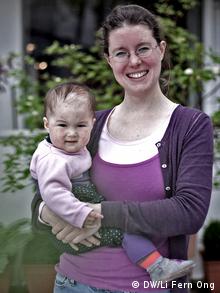 Diaper-free practitioner and coach Freya Donner and her daughter

For Freyer Donner, diaper free is not the problem, but the answer."Alice used to cry really intensely. I spoke to an author who wrote a book about diaper-free babies. She said that children will try to communicate," she said.

"From the day we went diaper free, Alice stopped crying so much and seemed more satisfied in general. We saw positive results immediately," Donner remembered.

Donner not only did away with diapers herself, she also teaches other parents how to practice the method with the organization Babies without Diapers, founded in 2012. She attended the group's first-ever training course for coaches last year in Berlin.

Through an online forum, Donner met Dr. Heinrich Ratz, a general practitioner and school physician from Braunschweig in northern Germany.

Ratz has been treating babies for over 20 years and diaper dermatitis, commonly known as diaper rash, was something he used to see every day - until four years ago he began encouraging his patients to drop the diapers.

"It's known as elimination communication in the English-speaking world. Mainstream medical science is still ignorant, but there is a growing community of doctors interested in the topic," he told DW. At medical school in Germany, he remembers learning that babies usually acquire conscious bladder control by 24 months.

In 2009, however, a 13-month-old patient with diaper rash, didn't line up with his textbooks: "The rash looked so painful that I tossed her diaper into the bin. The ride home from my clinic was going to take an hour, so I asked the mother to try and get her daughter to pee before they left. The child peed on command." 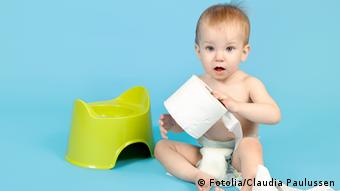 Putting it into practice

Elimination communication (EC) requires a greater time investment on the part of the caregiver in the baby's first year of life. This usually decreases later, compared to diapered babies. By year three, when other kids begin potty training, their diaper-free counterparts can already go to the toilet themselves.

American EC pioneer Laurie Boucke began the practice when she had her third child. She writes that, "After about nine months he rarely needed a diaper, day or night. He stayed dry during most of the day at 18 months and was finished with all aspects of potty training at 24 months."

The three key components of the practice are timing, cueing and signals. Timing largely means establishing a routine, which helps prevent unwanted accidents. This could be just before bedtime or after a feed, for example.

Cueing involves an auditory signal given by the caregiver which the child learns to associate with going. While Donner uses "loo loo" with her baby, other parents might sound a sibilant "ssssss." Initially, this is given while the child is eliminating so that they develop an association.

"Ninety percent of newborns signal that they have to do a number one or a number two," Donner tells her workshop participants. In Alice's case, it was also auditory. "Before she did a big one, she would always cry a lot."

Other signals might include squirming, trying to remove clothing or blankets, or sudden fussiness. 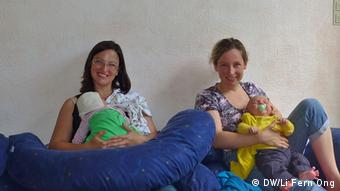 It is estimated that a disposable diaper will take up to 450 years to decompose. Around 8.4 million of them are thrown away on a daily basis in Germany alone.

As the leading manufacturer of diapers in Germany, Procter & Gamble (P&G) have been supplying the German market for 40 years, long before elimination communication entered western consciousness in 1991. Currently two million German babies wear the P& G brand of diapers, Pampers.

P&G declined to comment on the potential impact of the diaper-free movement on sales. But Melanie Schnitzler, head of brand communication, told DW, "In our Western world diapers are critical for raising children based on our standards of hygiene and social behavior."

Dr. Rainer Ganschow, pediatrician and director of the Children's Clinic at the University of Bonn, agrees that there are potential hygiene issues with going diaper free.

His adds that, "While I support raising infants diaper free or partially diaper free, we need more research about EC. Most pediatricians are not sufficiently informed or experienced in this method."

For Donner and baby Alice, the practice has become a well-rehearsed routine. Sleeping beside her mother without a diaper at night, Alice wakes up when she needs to use the small potty stored under the bed. Donner assists her onto the potty in the dark before the pair fall back asleep.

Donner hopes to raise awareness about diaper-free parenting in Germany. "Many people have reservations about this subject," she said. "They don't know what to expect because nobody they know actually does it."

She tells the parents at her workshop, "Just give it a try, it won't hurt. Take some humor with you, and enjoy the journey."

Dad's the word in Berlin

Berlin's party image is as legendary as its infamous concrete wall. But, as DW's Julian Tompkin discovers, there's a new and slightly more salubrious cliché on the rise in the city: the full-time dad. (19.04.2013)

Germany is known the world over both for its beer and dark history, for its classical music and health care system, but one thing that's been a well-kept secret: health retreats for moms and kids. (05.09.2011)

Listen to the radio report by Li Fern Ong