DFB to investigate report of racism during Bundesliga match

The German FA will launch an investigation in to a report that Bayer Leverkusen's Nadiem Amiri was the subject of racist abuse against Union Berlin. Union sporting director Oliver Ruhnert denies it happened. 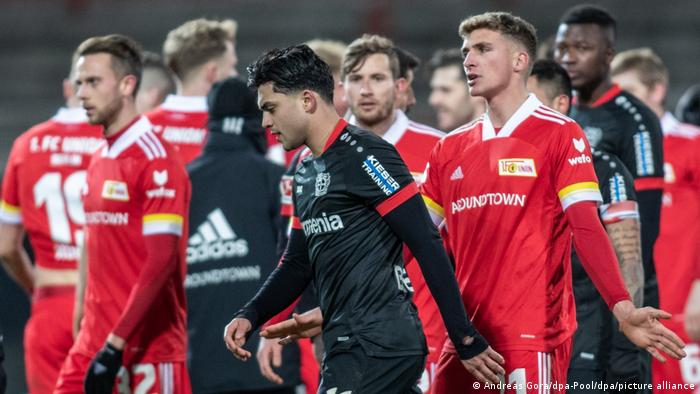 Nadiem Amiri (center) has accepted an apology from an opponent

The German Football Association (DFB) says it will open an investigation into a report of racism during the closing stages of Bayer Leverkusen's Bundesliga defeat to Union Berlin on Friday night.

At full time in Berlin, Leverkusen defender Jonathan Tah said in a television interview that his teammate Nadiem Amiri had been racially abused by a Union Berlin player.

Midfielder Amiri, who was born in Ludwigshafen to Afghan refugees and who has made five appearances for the German national team, was reportedly called a "f****** Afghan" by Union defender Florian Hübner.

Amiri released a statement via Leverkusen's Twitter account, saying: "He came to me in the dressing room. Ugly words were uttered out of emotions, which he is very sorry about. He has given me believable assurance of that, therefore the matter is settled for me."

However, while Union head coach Urs Fischer said "such things have no place on the pitch, therefore it definitely needs investigating" and the club's press officer Christian Arbeit also apologized, sporting director Oliver Ruhnert denied that Florian Hübner had used the words.

"As far as I know, this expression was not used. I think that too much has been read into it and I don't think we can speak of a racism scandal. In the heat of battle, things can be understood differently to how they were said," said Ruhnert.

Nevertheless, the DFB says it will start an investigation at the start of next week.

"As a first step, we will write to all those involved and request statements," said Dr. Anton Nachreiner, chair of the DFB's control board. "At the same time, we will evaluate the material we have already."

Responding to the announcement of the investigation, Union Berlin wrote on their official Twitter account: "Regardless of accusations, Union Berlin says 'No to racism' – always and everywhere!"

Union won the game 1-0 thanks to a late goal from Cedric Teuchert.

The former Germany international has apologized for suggesting that Amine Harit and Nabil Bentaleb's heritage could explain alleged attitude issues. The pair are currently suspended by their club, Schalke.