European magazine to be broadcast by partners in Albanian, Croatian and Romanian. Newest developments are a continuation of Deutsche Welle’s strategic plan. 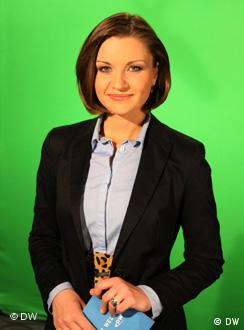 Deutsche Welle has expanded its television services in Central Europe by making a magazine covering European issues available to partners. In Kosovo, “Europe Today” will be broadcast by the leading public broadcaster RTK starting November 24. On December 7, the Croatian version will go on-air with Kanal Z1 and be broadcast every Wednesday. TVR Info in Bucharest started broadcasting the 26-minute show on October 1. “Euro Box” is shown there nationwide on Saturdays. The hosts for the new shows include Lindita Arapi (Albanian), Srecko Matic (Croatian) and Lavinia Pitu (Romanian).

The basis for the individual features is taken from Deutsche Welle’s magazine “Europa Aktuell” and additional shows on DW-TV. The material for the European magazine is adapted for use in Deutsche Welle’s headquarters in Bonn. Regional-specific content - like press reviews and interviews - is produced especially for inclusion in the weekly broadcast.

This is just one more project in line with Deutsche Welle’s strategic plan. It allows for partners throughout Central Europe to broadcast a magazine in their local language with material provided by Deutsche Welle. In Poland, TV Szczecin and TVP Info have been broadcasting a similar weekly magazine (“Euro Neighbors”) for several years.

All of these projects are part of a comprehensive reformation process that is transforming Germany’s international broadcaster into a true multimedia organization. Journalistic news, features and productions are being made daily in 30 languages in Deutsche Welle’s studios in Bonn and Berlin.

All the latest news from Distribution, Sales and Service.