Ron Sommer announced on Tuesday he is resigning from the top spot at Deutsche Telekom. The CEO had lost the support of the government and many small shareholders as Telekom’s debt ballooned and its share price plummeted. 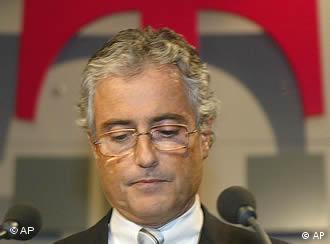 Citing a breakdown in trust with the supervisory board and a desire to avoid further damage to the company, Deutsche Telekom’s CEO Ron Sommer announced his resignation on Tuesday. The move caps a week of intense speculation and rumours about the future of beleaguered telecoms boss.

"When a chief executive cannot really on the full confidence of the supervisory board, resignation is the only responsible step left open," Sommer said at a press conference at Deutsche Telekom’s headquarters in Bonn.

The supervisory board later announced it has named Helmut Sihler, a 72-year-old former board chair, as the company’s caretaker CEO for the next six months. Gerd Tenzer, the German government’s favored candidate for the top job but seen by many analysts as colorless, will act as Sihler’s deputy.

Hans-Dietrich Winkhaus, chair of the supervisory board, said Europe’s largest telecommunications company would now set itself on a radical course to reduce the 67 billion euro ($68 billion) debt on the Telekom books.

Sommer’s future was anything but certain even in the hours leading up to his resignation, despite the pressure from many quarters over the last week for change at the top.

The Israeli-born Sommer, 53, took over the Telekom reigns in 1995 and presided over the company’s partial privatization in 1996, convincing millions of stock-shy Germans to buy shares in the company with his smooth sales pitch.

But those stocks proved a key element in his eventual downfall. After the explosive telecoms boom of the late 1990’s came the equally dramatic bust of 2001, leaving the German giant saddled with debt and pushing its "T-shares" into the basement. The shares lost 90 percent of their value in the last two years.

That development robbed the often-criticized Sommer of one important pillar of support he had always counted on, that of German Chancellor Gerhard Schröder. The current Social Democratic government, which owns 43 percent of Telekom, is facing an election in September and is behind in the polls. It has been trying to woo the three million small Telekom investors angry that the company’s stock has hit rock bottom.

A change at the top, the government’s thinking went, might change the ailing company’s fortunes and last week it went about looking for a replacement for Sommer.

But Sommer did not go easy. The charismatic one-time mathematician had some powerful allies on his side.

Henry M. Paulson, head of the US bank Goldman, Sachs, wrote a letter to the chairman of Telecom’s advisory board stating that sacking Sommer would have "negative consequences" on its business.

Last Friday, more than 18,000 Telekom employees put ads in newspapers across Germany telling the government to keep out of Telekom’s internal affairs. On Tuesday, 300 staff gathered in front of company headquarters in Bonn, again demanding that the government stop meddling in their company’s business.

"Most of us are behind Sommer. After all, there’s no suitable replacement," Frank Klann, a Telekom employee who also owns company stock, told Reuters. "Of course I’m disappointed (about the share price), but I also own other shares and let’s not pretend that they aren’t all dogs."

But in the end, Sommer’s renowned charisma and self-confidence could not beat a government plotting his overthrow. Even before the supervisory board, gathered for a special meeting to decide Sommer’s fate, had cast its vote, Sommer announced he was stepping down.

But the opposition was quick to pounce, decrying the government’s role in the affair and calling the development "catastrophic for the German economy." General Secretary of the Christian Democrats, Laurenz Meyer, said while the federal budget had profited from Deutsche Telekom, the government had turned around and damaged the company through its interference.

The Free Democrats called the resignation a "disaster," accusing the government of playing political football with Telekom.

Political scientists tended to agree, saying Schröder did himself no favors with his maneuverings to oust Sommer. Frank Decker, professor at the University of Bonn, said Schröder showed a lack of good political instinct in the matter.

"He used populist measures that hadn’t been well thought out, just to ingratiate himself to small shareholders," he told Reuters. The opposition will benefit from it, he added.

This weekend, Telekom's board is reported to have found a replacement for Telekom chief Ron Sommer. The ousting of Sommer from his post has led to a dispute within political, and Telekom's ranks.