Deutsche Bank's management can expect a rough ride at the lender's Annual General Meeting on Thursday. Shareholders are fuming about a series of never-ending scandals and a falling share price. 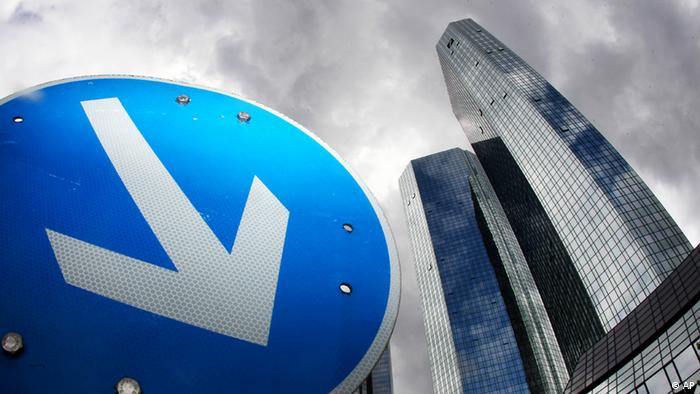 There are two main reasons for shareholders' displeasure: The bank's handling of a scandal-steeped recent past, and doubts about its strategy going forward. Investors' mood could be measured by the performance of the bank's shares on April 27, the day the new strategy, many months in the making, was presented. The shares were the worst performers on the German stock market's DAX index of the thirty most important publicly traded corporations on that day.

The long debate over strategic direction was supposed to have been settled at that point. But what was presented was only the broad outlines of a plan. The details, the bank's co-CEOs Jürgen Fitschen and Anshu Jain said, were supposed to be announced over the ensuing three months. That, it seems, didn't impress the shareholders; the share price has lost about 10 percent since.

At the Annual General Meeting (AGM) on Thursday, May 21, in the cavernous 'Festhalle' building at Frankfurt's trade-fair grounds, it's the shareholders' turn to speak to the bank's management. There's good reason to expect a turbulent meeting. Contentious AGMs have been common in recent years, given the numerous scandals and lawsuits the bank has been wrapped up in. But this year, there's more dry tinder ready to catch fire than ever.

Anger at the co-CEOs

A slew of major shareholders are angry at Jürgen Fitschen and Anshu Jain. They're seen as having promised much and delivered little. While the share price has increased by 12 percent at time of writing compared to June 2012, when the duo took over, that's the smallest increase of any of the 30 DAX-listed corporations. Over the same time-frame, the DAX, buoyed by the tsunami of money from the European Central Bank's "quantitative easing" operations, has gained 90 percent.

When they took on their roles, the co-CEOs had promised a return on equity (RoE) of 12 percent by the end of 2015. That's unlikely to be achieved. Last year, RoE was 2.7 percent. Jain and Fitschen recently revised their RoE target down to 10 percent.

Many shareholders think the new strategy doesn't go far enough. The plan has four key elements: Cutting back the bank's private client business, reducing the number of bank branches, offloading unprofitable lines of investment banking business, and selling Postbank - acquired just six years ago in an expensive takeover. Taken together, the steps are meant to reduce the size of Deutsche Bank's balance sheet and enable it to meet new regulatory requirements.

But the plan comprises relatively minor adjustments, rather than the bold steps for change that are needed, according to some critics - including Klaus Nieding of the German Shareholders' Protection Association (DSW). Many shareholders had been in favor of splitting the bank into two separate pieces: A private client business and an investment banking business.

A communications campaign launched by the bank's CEOs, aimed at promoting the planned changes, has made very little impact so far. On the contrary: In an interview with the German business weekly Wirtschaftswoche, board chairman Paul Achleitner responded to a question asking whether Fitschen and Jain are irreplaceable with the words, "Who is, really?", adding that such questions are always about the future of the bank as an institution, not about individuals. That's not exactly an oath of fealty. 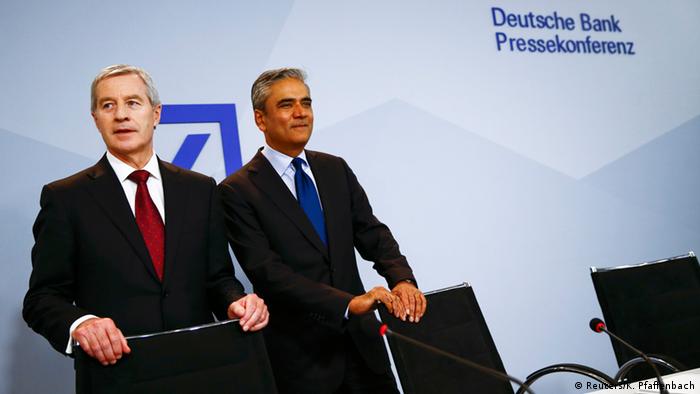 In an interview for German weekly newspaper "Frankfurter Allgemeine Sonntagszeitung", co-CEOs Jürgen Fitschen and Anshu Jain both rejected any suggestion of stepping down.

The bank's long list of past shady dealings and scandals keep coming back to haunt the pair. A recent $2.5 billion fine for Deutsche Bank's role in the Libor and Euribor interest-rate-fixing scandal is still in the news, and will very likely be a topic of discussion at the AGM - because some analysts believe that the fine might not have been so high, had the bank's leadership cooperated more willingly with investigators and regulators in clearing up what happened.

Another topic will be the fact that Jürgen Fitschen is having to appear in a Munich court once a week these days, to sit in the dock and defend himself against a prosecuting attorney's accusation that he committed perjury in testimony given over a massive lawsuit brought be the heirs of the media tycoon Leo Kirch some years ago. This is not the sort of thing to give shareholders confidence in a CEO.

The influential US shareholder advisory ISS has therefore recommended to investors that they refuse to approve a motion to discharge Deutsche Bank's senior management of its personal liability for the past year's results. Such motions must be voted on at corporate AGMs under German law.

It remains to be seen how many major shareholders will follow the recommendations. The bank's shares are very widely held - only two shareholders exceed the statutory threshold of three percent beyond which they must register with regulators: The so-called anchor investor, Paramount Services Holding from Qatar, which holds 5.8 percent, and the world's largest hedge fund, BlackRock, with 6.6 percent of the shares. Each only exceeded the 3 percent threshold during the past year, as a result of Deutsche Bank's sale of shares to fund an increase in the capital base required by regulators.

Votes at general meetings normally generate election results of the sort that used to be typical of eastern European Communist regimes - with everything approved by overwhelming majorities - but things could turn out rather differently on Thursday in Frankfurt. The bank expects that up to 20 percent of the shareholders might refuse to approve the management's annual report.

While that would have no direct legal consequences - because only the Supervisory Board can fire senior management - it would nonetheless be a significant shot across Jain and Fitschen's bow. A demonstration that many shareholders lack confidence in management is something the beleaguered bank, which remains in crisis management mode, will not find helpful.