Denmark: Consent law leaves sex workers out in the cold  | Europe| News and current affairs from around the continent | DW | 23.11.2020

The Danish government plans to reform the current sexual violence law and make the question of consent rather than violence the basis for determining rape. However, a number of issues remain unresolved. 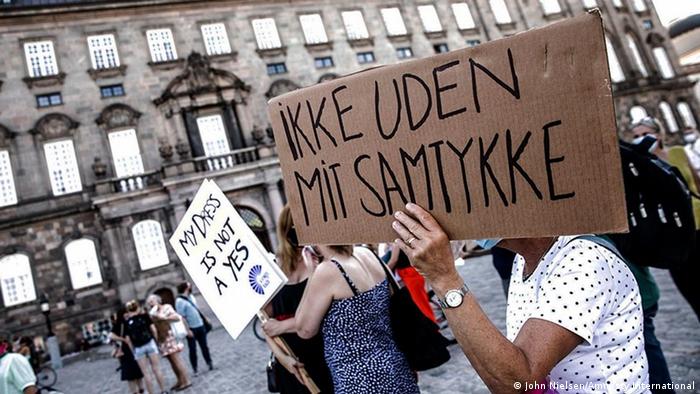 There was broad support for the draft bill in a first parliamentary hearing last Friday. "It is time for the right to sexual self-determination to become the focal point when it comes to rape. As a society, we must provide rape victims with the legal protection to which they are entitled," wrote Minister of Justice Nick Hækkerup in his note to Parliament.

Denmark traditionally scores high in gender equality rankings, however sexual violence is widespread and the number of reported cases is low.

In 2018, the Crime Prevention Council estimated that more than 6,700 women were victims of such acts, but only about 1,300 cases were reported to the police, resulting in 69 convictions.

Read more: Sweden says rape is rape, regardless of force or threats

"When talking to survivors, they told us that that the main reason why they didn't report the rape was because of the legal definition," said Helle Jacobsen, a program leader on gender issues with Amnesty International. Since 2017, the NGO, along with local activists' groups and survivors, has been working on raising awareness and pushing for a cultural change.

Women's rights groups are convinced that the new consent law will lead to greater respect for sexual self-determination and to fewer abuses: "This is an historical moment for Denmark, because consent law is a big win for equality," said Jacobson. 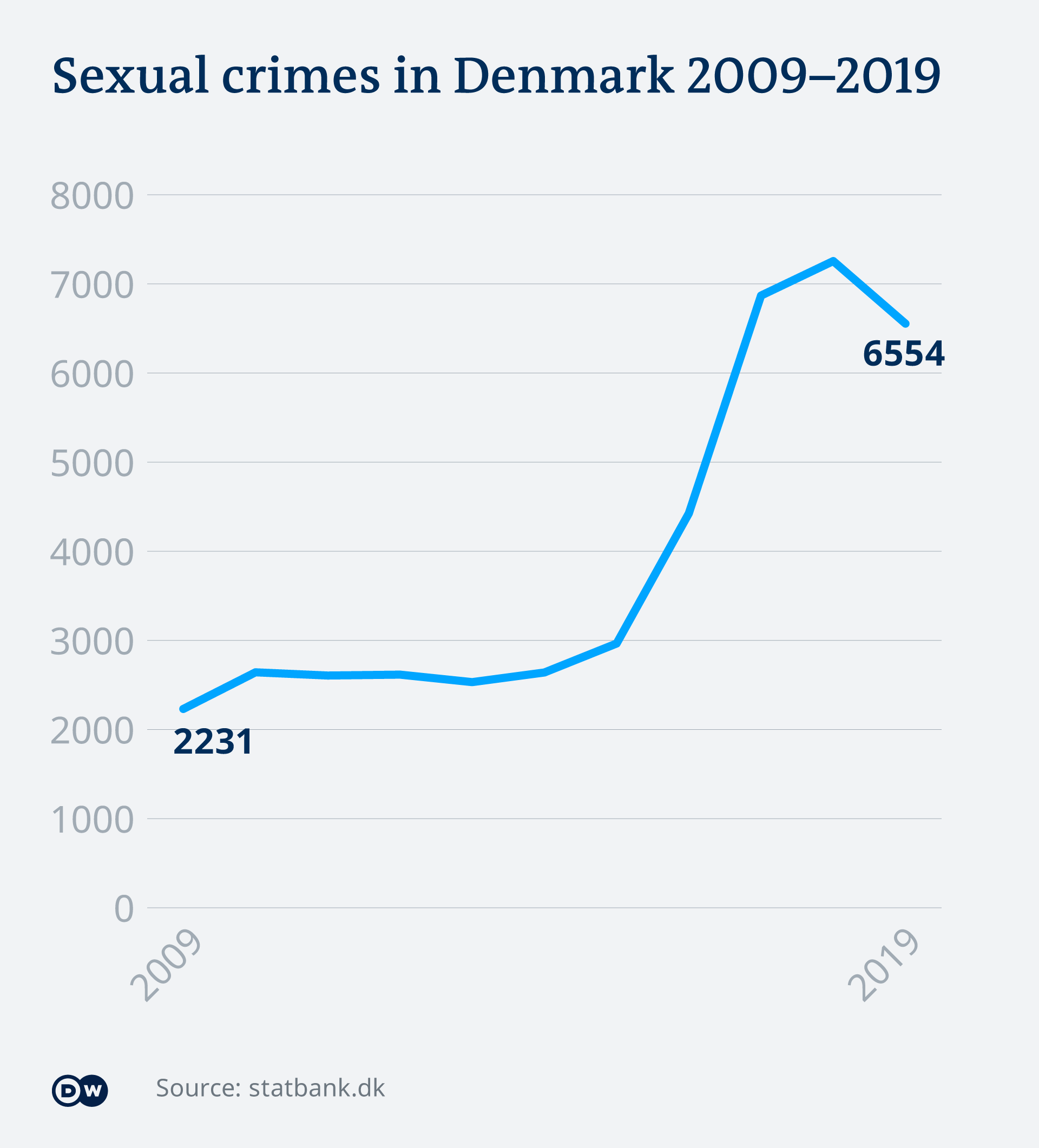 Equality, but not for all women

The flip side of the coin is that not all women will benefit from the new law.

Sex work in Denmark was decriminalized in 1999, however being a sex worker is not legally considered a profession. These women remain stigmatized and many sex workers are left to struggle without job protection and health coverage.

"[Buying and selling sex has been decriminalized], but what is illegal is to profit off of sex work as a third party," said Polina Bachlakova, a volunteer with the NGO The Red Van. "Anybody that could have anything to do with sex workers could be potentially persecuted. This is why, for example, many landlords are hesitant to rent out apartments to sex workers."

Due to the coronavirus pandemic, the situation for sex workers has become even more difficult, not least because of fewer customers: "I risked being thrown out by my landlord because I could not pay," said a Nigerian girl working in Istedgade, the red-light street of the Vesterbro neighborhood, who wished to remain anonymous. "He let me stay because he wouldn't have been able to find someone else to rent the place."

Between migration and hospitalization

Most of the sex workers who offer their services on the streets or in their apartments are undocumented migrants from Nigeria, Eastern Europe and Thailand.

To help during the coronavirus pandemic, a health package was introduced to compensate for a loss of income. However, many women were not eligible for the aid package, such as the Nigerian sex worker, and had to save elsewhere. "I did not eat for a couple of days," she said.

Meanwhile, the government's hard-line policies on immigration have exacerbated the situation. "The political rhetoric is that it's a crime to come here without documents and whatever violence or inconvenience you have because of that, it is your own fault," said Malene Muusholm, an outreach coordinator with the NGO Reden International, which provides counseling for potential victims of human trafficking. 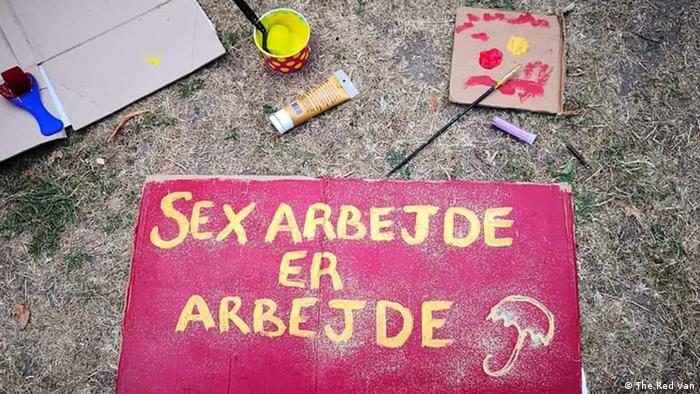 Migrant sex workers who are at the whims of their landlords and pimps and are desperate to send money home to their families face increasingly dire situations. "We are not criminals. This is not something we enjoy doing, but we have to because we need to do something for a living," the Nigerian sex worker explained. If a customer becomes violent, they often refuse to seek medical treatment for fear that hospital staff will report them to the authorities.

The risk of being deported from Denmark and the fear of not earning enough money are the girls' main concerns. "In the past 10 years, we registered two reported rapes. They were victims of human trafficking and hence they had legal ground to stay in the country, but there could be way more," said Muusholm. "Many sex workers from Eastern Europe tell us they're beaten up by their partners or pimps or have to deal with violent customers. They let us know maybe a year or six months later as they do not think it is important."

The specter of stigmatization

"During the lockdown we noticed that customers have been getting more agitated and more violent," said Bachlakova. The Red Van's role is to provide a place where sex workers are provided with basic care and help with preventive measures. "We drive the van to Vesterbro, it is used between 15 and 30 times per night and we distribute condoms," she continued. "No matter what a person's life situation is, they are worthy of having a dignified place to work and access to some basic human rights and support." The fear of stigmatization and labeling is the main reason why women don't report cases of rape: "Survivors expressed fears of being judged by their peers as well as by the authorities," said Amnesty's Jacobsen. Their report shows that almost 50% of rape survivors who come into contact with the police say they are not satisfied with how the police treated them.

Many Danish women also feel that the legal system has failed them. "In 2019 there were only 79 convictions. That really decreases the level of trust in the legal system, because women feel there's a really small probability that the report will go forward," said Jacobsen.

Reden International wants to take a more holistic approach in terms of further reforms of the law on sexual violence. "We would like a law where anyone regardless of documents should be able to report violence and rape against them. We would like to have a society where perpetrators are caught, instead of people not being able to report to the police," said Muusholm.

The 59-year-old is stepping down after several women came forward accusing him of sexual misconduct. The Social Democrat has apologized for his behavior, saying he did not want to stand in the way of progress.