Demonstrators in Dresden successfully prevented right-wing extremists from staging a march to commemorate the city being firebombed. Others gathered to form a symbolic human chain against the neo-Nazis. 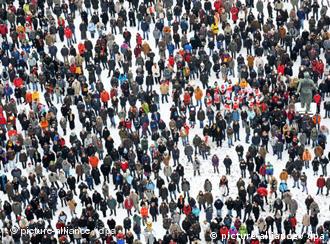 A human chain was formed in an organized show of defiance

Left-wing protesters thwarted neo-Nazis in their efforts to stage a "mourning march" for victims on the 65th anniversary of Allied incendiary bombing raids on the city of Dresden.

At least 5,000 right-wing extremists wearing black gathered at the city’s Neustadt station, hoping to stage a procession through city streets.

Opponents of the rally gathered in streets around the station to prevent neo-Nazis from reaching their rallying point.

Police urged the neo-Nazis to cancel the march, saying they could not guarantee the safety of participants along the route. The procession was eventually called off late in the afternoon. 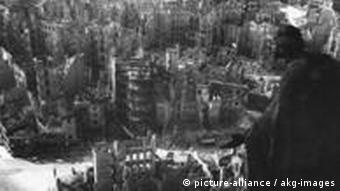 Dresden was devastated by the bombing raids in 1945

An anti-fascist group, Dresden Without Nazis, which included politicians and trades unionists, had earlier called on city residents to block the rally in a peaceful way.

"We have for the first time succeeded in preventing the biggest neo-Nazi march in Europe," said alliance spokeswoman Lena Roth.

Police said there had been isolated clashes between the two sides and at one point water cannons had been used.

Witnesses said that bottles and fireworks were thrown by both sides at each other, as well as at the police.

Police spokesman Thomas Geithner said up to 6,000 far-right supporters from around Europe had gathered to take part in what organizers called a "mourning march."

Officers were brought in from all over Germany to prevent the clashes and made as many as 30 arrests on both sides.

The bombing raid on Dresden began on the night of February 13, 1945, killing some 25,000 people and destroying much of the historic city. Opponents of the march claim that neo-Nazis are exploiting the wartime deaths for their own ends.

On the other side of the Elbe River, a "human chain" of 10,000 people formed in a symbolic action called for by mayor Helma Orosz. 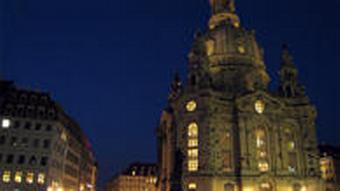 "Let's turn Dresden into a peaceful and open city, a bastion against intolerance and stupidity. We will confront Nazis young and old who are trying to exploit this day of mourning," Orosz said.

Critics of the World War II bombing raid claim it was unnecessary because Germany was already close to defeat. The city has only been restored to its pre-war glory in the last 10 years.

A series of concerts and memorial services were arranged for the evening, including one at the Frauenkirche, or Church of Our Lady, which has been rebuilt.

Failed attempt to ban the march

The right-wing march was organized by a group known as the Junge Landsmannschaft Ostdeutschland (Young National Association of East Germany), or JLO, which is supported by Germany's right-wing party, the NPD.

German neo-Nazis claim the carpet bombing of Dresden at the end of World War II was a war crime and have been holding rallies since the 1990s to protest what they call the "bombing Holocaust."

Germany's right-wing scene has been staging demonstrations in Dresden on February 13 for over a decade.

The city of Dresden had tried to have the march banned yet a Saxony state court ruled against a ban, saying that would have breeched German constitutional laws allowing public assembly.

Neo-Nazis allowed to march in commemoration of Dresden bombing

On Saturday, the 65th anniversary of the infamous allied firebombing of Dresden, thousands of Neo-Nazis will be allowed to march through the city - amid counter protests and official commemorations. (12.02.2010)

The struggle over Dresden’s symbolism

On Sunday, Dresden commemorates the 60th anniversary of the bomb attacks that reduced the city to rubble. The far-right hopes to capitalize on the tragedy to spread its own message while others focus on reconciliation. (10.02.2005)

The ceremony was scaled-down this year due to COVID-19. Günther Ulbricht, who survived the blitz despite being buried under rubble, urged people to remember peace is never guaranteed.