Water cannons, 49 police injured and almost 60 arrests: That was the result of recent hooligan rallies against Salifists. Arguing politicians and experts are now at loggerheads over the use of the right to demonstrate. 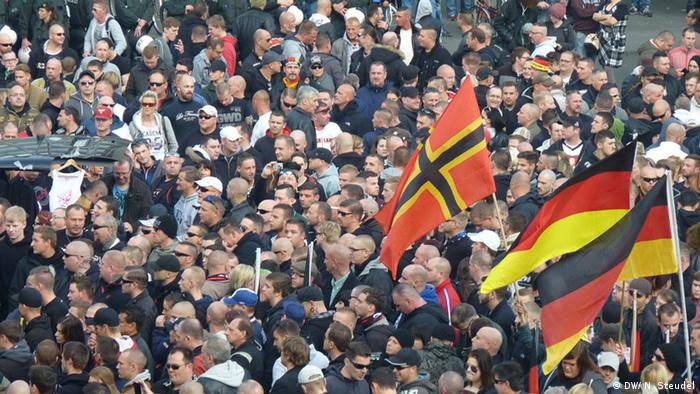 The reactions came quickly and controversy soon followed. Demands by the German Police Union to tighten criminal laws have already been rejected by CDU interior expert, Wolfgang Bosbach. His fellow party member and German interior minister Thomas De Maiziere agrees. Also at the heart of the dispute is the question of whether or not Sunday's events in Cologne should have been banned beforehand, due to the anticipated violence. For the authorities, however, time is of the essence, as the self-proclaimed hooligans have already planned to gather again in November to stand against the Salafists.

Freedom of assembly is a fundamental right

In Germany, the right to assembly and demonstration (Article 8, paragraph 1 of the German Constitution or Basic Law) is a so-called "essential fundamental right." Everyone has the right to assemble peacefully and unarmed with others, but open air public gatherings must be registered with the relevant local authority at least 48 hours in advance. The authority (usually the public order office) can, however, issue bans, for example if it could lead to violence or if general safety is put at risk. But the administrative courts will always have the final word.

In hindsight it's clear: Cologne's hooligan march could have been prohibited. It's now up to the city to ask itself why the demonstration application of the known right-wing party, Pro NRW, was ever granted in the first place. Even when a demonstration is approved, the authority still has the right and duty to decide where the gathering should be held. The train station plaza in a city, home to more than a million people, certainly wasn't the place for a violent protest group of 5,000 demonstrators. The demonstration law does in fact include the choice of location, but only if the event is considered to be harmless - something which is far from the Cologne demonstration.

The level of violence reached by this coalition of football hooligans and the right-wing political scene is new territory for security experts and politicians, but the merger of the two groups, which was previously seen only in its infancy, is already planning its next meeting. In November, the hooligans and right-wing extremists want to meet in Germany's capital of Berlin. Ahead of next month's planned demonstration, the German Police Union has called for a substantial improvement in equipment. The cut back of some 10,000 jobs in the riot police by 2020 is also set to be called off. The interior ministers of Germany's 16 states are due to discuss the topic at their next meeting.

The German right-wing scene seems to be on the upswing after riots rocked Cologne on Sunday. The alliance of Soccer hooligans and Neo-Nazis could cause more trouble, says expert Fabian Virchow. (29.10.2014)