Democracy and China top German agenda in Brazil diplomatic visit | Germany| News and in-depth reporting from Berlin and beyond | DW | 30.04.2019 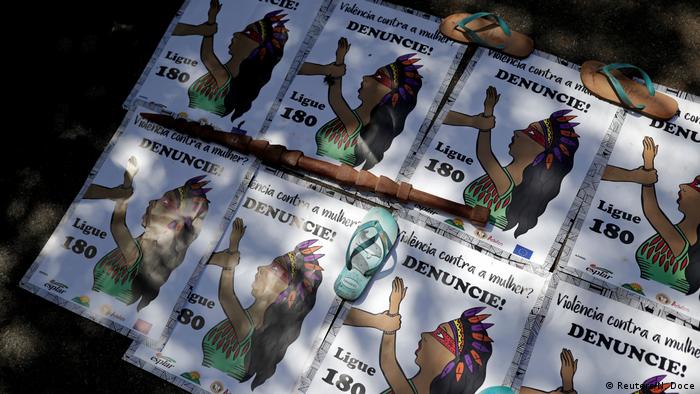 "We will talk about topics like climate protection, the rain forest, the topic of human rights, minorities, homosexuals," Maas said on his arrival to Brazil on Monday. "Partners must be able to discuss such things with one another."

While the topics might appear to be standard diplomatic fare, they are being put forward to a politician known for incendiary comments against black people, women and homosexuals.

As part of the first delegation from the European Union to meet Bolsonaro since he took office in January, Maas will seek to promote liberal democratic values without causing too much controversy, analysts told DW.

Latin America is a region that Germany has "overlooked" for too long, Maas himself has said. But during his four-day trip to Brazil, Colombia and Mexico, one other country will also have a place on his discussion agenda: China. 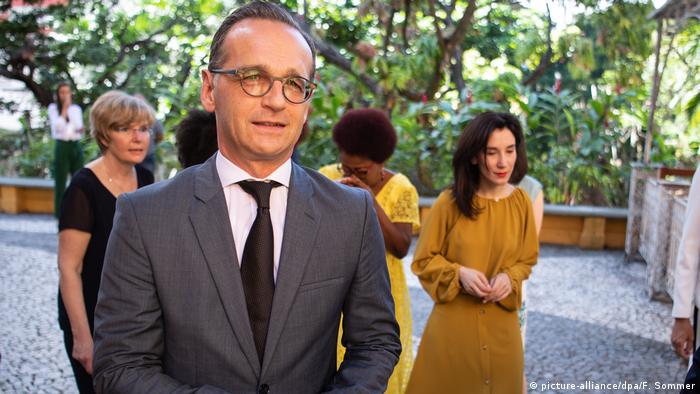 Maas began his trip to Brazil in a symbolic, if unusual manner for a foreign minister on his first visit there: He delivered a sharp rebuke against populism and nationalism in a country now governed by a right-wing populist dubbed the "Trump of the Tropics."

"We are currently experiencing dangerous setbacks," Maas said in the coastal city of Salvador da Bahia on Monday, where he inaugurated a new network to promote women's rights in the region. "Populism and nationalism are on the rise worldwide. And achievements that have been won over decades are no longer just being discussed but are sometimes even being questioned." 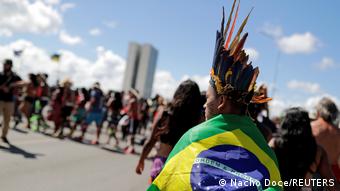 Indigenous inhabitants of Brazil have protested Bolsonaro's stance toward their rights

The 2018 election of Bolsonaro — controversial not only for his comments against minorities but also for his admiration of the military dictatorship that ruled Brazil from 1964 to 1985 — was the tipping point that shed light on Germany's political blind spots in the region, said Sabine Kurtenbach, acting director of the German Institute of Global and Area Studies' (GIGA) Latin America department.

"Latin America was not atop the agenda because it was considered on a good track toward democracy," she told DW.

"The current crisis in Venezuela and the shock waves of the election of Bolsonaro have made quite evident that you should look and pay attention to what happens in Latin America, otherwise you might find … a lot of backlash against political democracy."

During the remainder of his trip this week, Maas will attempt to stem such democratic backlash in Colombia and Mexico, Kurtenbach said.

In Colombia, the government has struggled to uphold the 2016 peace accord with the Revolutionary Armed Forces of Colombia, or FARC, a former guerrilla movement. Many ex-FARC fighters have been granted amnesty and were allotted seats in parliament, but reintegration and reconstruction efforts have been slow after five decades of war.

Meanwhile, tension in Colombia is being compounded by the crisis in neighboring Venezuela, which has caused more than 3 million Venezuelans to flee since 2014. Colombia has absorbed over 1 million of these refugees, more than any other country in the region, but many Venezuelans have struggled to find the resources they need in developing Colombia where public services are strained.

"In Colombia, refugees, together with FARC members, could destabilize democratic efforts in the country," said Thomas W. O'Donnell, a lecturer of international affairs at the Hertie School of Governance in Berlin.

Mexico, one of Germany's most important regional partners, is also at a crossroads, said O'Donnell. Its new president, Andres Manuel Lopez Obrador, has become distracted from an ambitious slate of anti-corruption and social welfare election promises by a steady flow of Central American migrants heading north to the US-Mexico border, starting off an important economic relationship with US President Donald Trump on the wrong foot.

"Obrador is trying to handle Trump in a moderate way," said O'Donnell. "It's a very delicate manner to handle, and in that way, Maas and Obrador have something in common."

The German foreign minister's diplomatic rhetoric has been sharp on his Latin American trip thus far, but he is unlikely to push the envelope too far out of fear of undermining united European efforts in the region, said O'Donnell.

Instead, Maas is likely to focus efforts on stanching China's influence in the region.

"Although Maas talks in that direction, that's not the real policy focus," O'Donnell said, referring to the foreign minister's talk of bolstering liberal democratic values in the region. "It's really Germany against China there — the Chinese are moving into the types of exports that Germany normally specializes in."

German multinationals like Siemens and Volkswagen have been active in the region for decades, and German exports to Latin America are expected to bloom to €38 billion ($43 billion) this year, according to the German Chambers of Commerce and Industry (DIHK).

But according to O'Donnell, Germany has been "on the back foot" with the region for decades, backing out of investment opportunities and freezing free-trade deals as political crises in the region unfolded.

That opened the door to China, which has invested about €50 billion ($56 billion) in Brazil alone, the region's largest economy. Chinese fiber-optic cables and mobile networks dominate the region, and China has plans to construct a new airport in Ecuador and a transcontinental railroad connecting the Atlantic and Pacific oceans.

For Germany, this has kicked off "a full-court press to further relations with Latin America," said O'Donnell. "China has cut into traditional German exports there, so I think it's a priority because they have to find somewhere to do business in the region."

But Kurtenbach contends that it's not all economics for Germany in Latin America: When it comes to China, economic access also raises the fear of Beijing having undue influence over democratic governments.

"China is important economically, but so too is the danger of limiting the liberal political systems in the region by downplaying human rights and the rule of law," she said. "These are the German government's twin motivations."

After the foreign minister concludes his Latin America trip this week, he will welcome delegations from 30 regional countries in Berlin on May 28.

Panama has become the first Latin American country to sign on to Beijing's vast "Belt and Road" investment initiative. China has particular interest in Panama because of its location between the Pacific and Atlantic. (04.12.2018)