Demand for lumber soars in Germany, and so do prices | Business| Economy and finance news from a German perspective | DW | 17.05.2021

Demand for lumber soars in Germany, and so do prices

The coronavirus crisis has hit many sectors of the economy in Germany, but the lumber industry certainly isn't one of them. Prices for wood products have gone up markedly in recent months. But why? 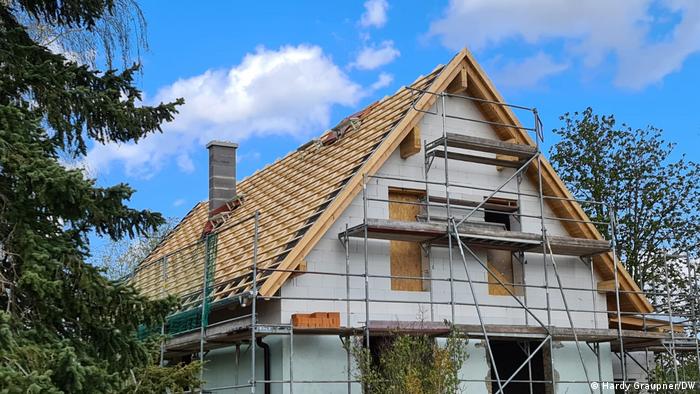 Lumber is in big demand in housing construction across Germany

Andreas Melzer runs a sawmill in Rüdersdorf just outside Berlin. The fact that a lot more people have engaged in DIY projects at home during the coronavirus pandemic means his order books are full.

Asked about media reports suggesting a severe shortage of wood on the market, the entrepreneur insists he hasn't had to worry about timber supplies. There's never been so much unprocessed wood around in Germany, he says.

Backing up his claim, Germany's Federal Statistics Office (Destatis) in 2020 confirmed a national logging record, the highest level since German unification in 1990 (see infographic below). 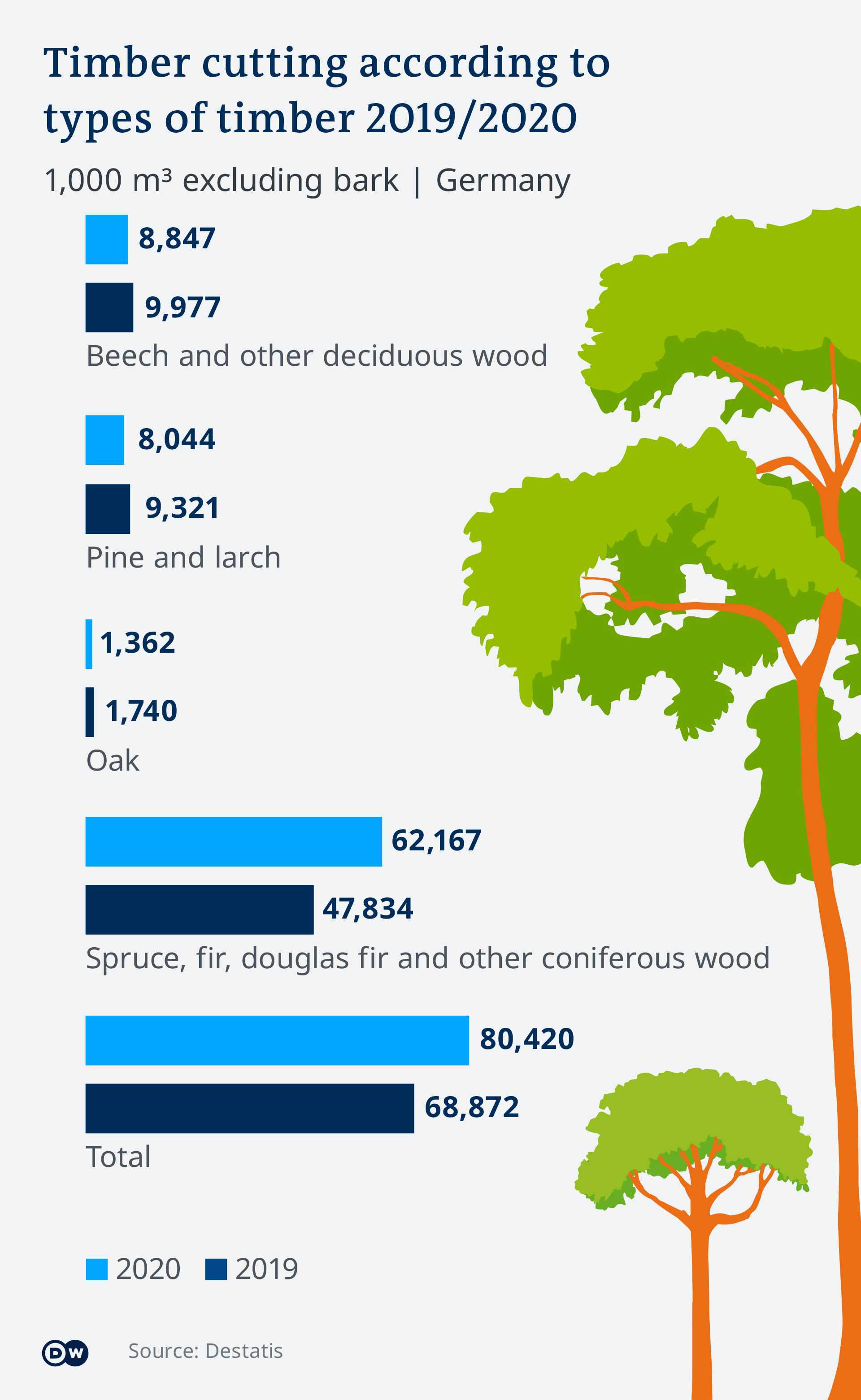 Such an increase in logging is partly due to rising demand in various key markets. But about half of it is a result of the damage done to trees due to the effects of climate change.

"The vast scope of logging last year can at least partly be attributed to the need to remove so many more trees damaged by storms or infested by bark beetles," Holger Weimar from the Hamburg-based Thünen Institute of International Forestry and Forest Economics told DW.

He said the logging figures provided by Destatis were indicative of recent trends in their own right, but did not fully include logging activities last year.

"It needs to be said that the official logging figures are up to 25% lower than the real figures as official stats do not include logging activities in privately owned forest areas," Weimar pointed out. 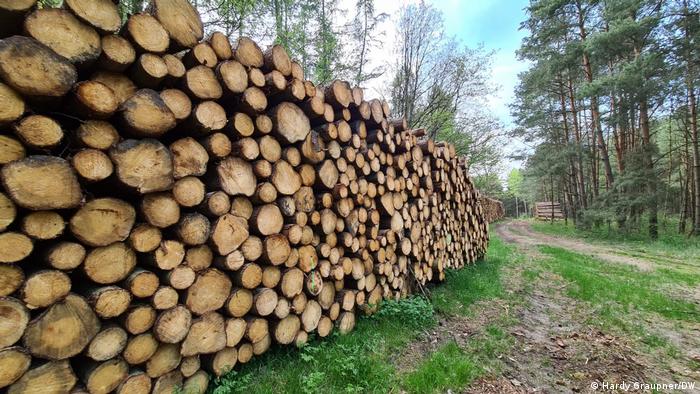 Can the domestic market absorb it all?

So where is all that timber going? For the moment, quite a bit of it is going nowhere. Huge wood stacks are piling up in forests across the country as they wait their turn to be processed at a sawmill. Mills in Germany haven't had a dull moment in recent months, trying their level best to handle the increased workload.

"The sector says sawmills across the nation have long been working at full capacity. They just can't cope with more timber," Weimar said. "That's partly a technical issue as there are not enough sawmills around, but there's also a lack of skilled labor."

The expert said the problem was brought to the fore as demand for lumber products soared even as the coronavirus crisis raged on. Timber hose construction has gained momentum and so have DIY projects in private households, as more and more people have been forced to stay at home. In addition, there's also been growing demand in key overseas markets.

"In the US, building activities already went up tangibly last spring, but wood-processing capacities are limited, especially since many sawmills were shut down during the global financial crisis," Weimar elaborated.

"There's a wood construction hype in the US right now, fueling lumber demand as the economy is in catch-up mode. And the large-scale investment programs announced by the Biden administration are also contributing to higher demand and a spike in prices," Merforth told DW.

Lumber scarcity or not?

Against the backdrop of this multifaceted situation, many German buyers and end users of lumber products feel there might not be enough left for them on the home market. There's no lack of media reports on people failing to get their hands on enough lumber for their businesses.

"The current hype in the US has been spilling over to Germany, and some market participants are hoarding lumber, filling their storehouses beyond their own needs, speculating on further price hikes and thus making that excess wood unavailable for others," Merforth commented.

Added to the tense situation is the fact that many carpenters in Germany are arguably making unjustifiably high demands on the quality of sawn lumber.

"The standard they ask for cannot always be met, with so much timber infested by bark beetles — other customers abroad gladly use this same material for construction projects."

And there's no reason not to, insists Peter Aicher, owner of the Aicher Holzbau family-run business in Bavaria and chairman of the Association of German Carpenters.

"Storm-damaged or infested timber is by no means an inferior resource," Aicher told DW. "Products from it have about the same properties as non-infested lumber. Apart from some blemishes, the material keeps its original load-bearing capacity when used in construction." 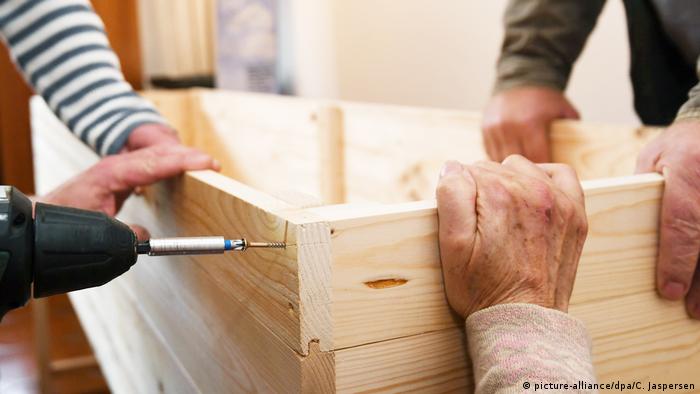 As more and more people have to stay at home due to the pandemic, DIY activities have picked up

Demand and supply in sync?

Mercer Timber's Carsten Merforth concludes it would therefore be inaccurate to speak of a general scarcity of lumber products. Domestic demand has risen, he agrees, but so has supply from the sawmills. He doesn't understand calls by some German policymakers for export restrictions.

"In 2020, the German sawmill industry exported just 600,000 cubic meters of sawn lumber more to the US. That's almost negligible," Merforth pointed out, adding that the US still gets the bulk of its imports from Canada and only 4%-5% from Germany.

"In the case of China, we're mostly talking about the export of storm-damaged or infested timber that no one here in Germany wants to use," he added. A large part of the 2020 exports to China were whole shiploads of logs from forest owners trying to relieve local markets. Roughly 6.1 million cubic meters of logs were exported from Germany, but only 900,000 cubic meters of lumber.

While not neglecting customers in other regions and at home, Merforth makes no bones about his company currently doing brisk and lucrative business with the US where clients are willing to pay a lot more now. "There was a period of 15 years when sawn lumber prices were extremely low, and nobody back then thought of supporting us so that we'd be better off," he said, stressing that his company had invested a lot in improving productivity and efficiency during that time.

Merforth pointed out that log prices at the time were very high by international standards, meaning his firm had to diversify in various markets, including internationally, to survive that trying period.

"For about six months now, prices have finally been going up, and some folks are immediately making a fuss about it," Merforth complained. The price level wouldn't stay that high for long anyway, he added.

Forest economics expert Holger Weimar agrees. He doesn't think the price rally for lumber will continue long into the future, although, he concedes, there's little experience with such extreme spikes.

"The US is about to expand its own capacities again to produce more at home," Weimar said. "Timber house construction may slow down a bit in Germany, and some bigger projects here may be postponed, but that's mere speculation for the time being."