Staring into deep red light for three minutes a day helps to maintain vision, British researchers have discovered. They found that the long-wave impulses stimulate the mitochondria in the cells of the retina. 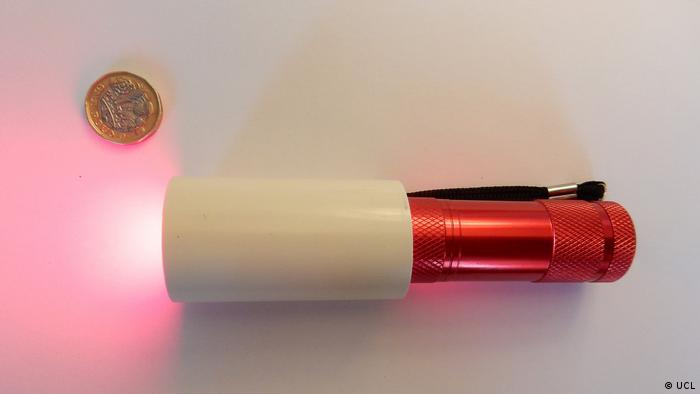 It could one day become an evening ritual, like brushing your teeth: looking into a red light for three minutes. By doing so, you may be able to counteract age-related loss of vision. A research team led by neuroscientist Glen Jeffery,  professor at the Institute of Ophthalmology at University College London, has now presented strong evidence for this thesis.

The scientists published their peer-reviewed results in The Journals of Gerontology  on June 29, 2020.

Read more: If you're worried about your eyesight, it's not screens you need to fear

The study involved 24 participants between 28 and 72 years of age, all without eye diseases. The researchers first tested the sensitivity of photoreceptors in their retinas. These consist of cone cells and rod cells.  The cone cells are responsible for color vision, while the rod cells are important for peripheral vision  and for vision at dusk and in the dark.

The scientists then gave the test persons specially constructed small LED flashlights. Their task: to look into the deep red light beam for three minutes every day for two weeks. Afterward, the sensitivity tests for the rods and cone cells were repeated.

Effective for people over 40 years

The experiment showed that only older people benefited from the red-light treatment. The performance of the cone cells improved by a good fifth in people over 40 years of age. No change could be measured in younger volunteers.

The improvement was particularly clear in the recognition of the color blue. This is also the color range in which vision typically deteriorates most. The performance of the rod cells also improved significantly.

In any case, the production of the lamps is not very expensive. Each piece cost the researchers the equivalent of €13 ($15).

The epidemic of near-sightedness

This is precisely why a warning is appropriate here: The retina is a highly sensitive organ. LED light, and especially laser light, can cause lasting damage to it.

The study now published is part of basic research. There are still no findings on possible long-term damage caused by such treatment, and no medical approval for such a therapy exists.

So please do not look into improvised or self-made lamps under any circumstances!

Support for the power plants of retinal cells

A natural decline in the power of vision takes place as part of the aging process in the photoreceptors of the retina.

"As you age your visual system declines significantly, particularly once over 40," says Jeffery. "Your retinal sensitivity and your color vision are both gradually undermined."

One of the reasons for this can be found in the aging cells of the retina. This is mainly due to the fact that the mitochondria in the cells lose their power. Mitochondria are regarded as the power stations of the cells. They supply the cells with energy in the form of the energy carrier adenosine triphosphate (ATP).

If the mitochondria lose power, the cells can no longer maintain their function.

The photoreceptor cells of the retina are among the cells with the highest mitochondrial concentration of all. At the same time, these cells also have a considerable energy requirement.

That is why the aging process has a stronger and earlier effect on vision than on other organs. In the retinal cells, ATP production slumps by an average of 70% over the course of a lifetime. The performance of the photoreceptors drastically declines.

Experiments on insects and mice

Jeffery compared light therapy to recharging a battery: "Our study shows that it is possible to significantly improve vision that has declined in aged individuals using simple brief exposures to light wavelengths that recharge the energy system that has declined in the retina cells," he said.