Deaths from long working hours on the rise, says WHO | Business| Economy and finance news from a German perspective | DW | 17.05.2021

Deaths from long working hours on the rise, says WHO

Working more than 55 hours per week can present "a serious health hazard," a new study has found. Hundreds of thousands of people die each year due to long working hours, and the pandemic could be making things worse. 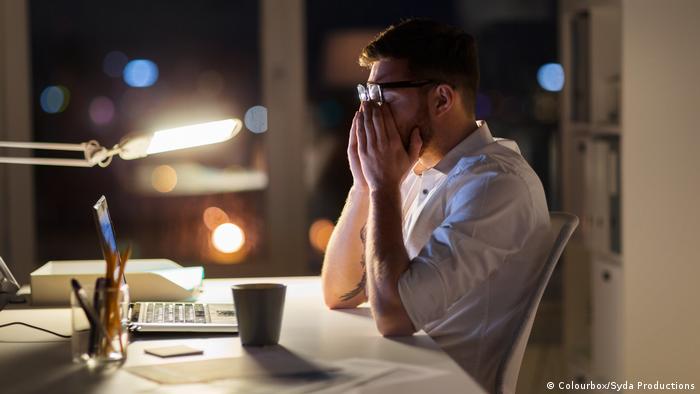 Research shows that the majority of those who overwork are men

Long working hours have led to hundreds of thousands of deaths each year, in a trend that is being exacerbated by economic insecurity due to the coronavirus pandemic, the World Health Organization (WHO) said on Monday.

The study also noted that the number of people working long hours is increasing, and currently stands at 9% of the total global population.

"Working 55 hours or more per week is a serious health hazard," said Maria Neira, director of the WHO's Department of Environment, Climate Change and Health.

"What we want to do with this information is promote more action, more protection of workers," she said.

'Blurred lines' between home and work

"The COVID-19 pandemic has significantly changed the way many people work," WHO Director General Tedros Adhanom Ghebreyesus said. "Teleworking has become the norm in many industries, often blurring the boundaries between home and work."

"No job is worth the risk of stroke or heart disease. Governments, employers and workers need to work together to agree on limits to protect the health of workers," Ghebreyesus added.

The WHO and the International Labor Organization (ILO) estimate that 398,000 people died from stroke and 347,000 from heart disease in 2016 as a result of having worked at least 55 hours a week.

The study concludes that working 55 or more hours per week is associated with an estimated 35% increased risk of stroke and 17% higher risk of dying from ischemic heart disease, compared to working 35 to 40 hours a week.

"The pandemic is accelerating developments that could feed the trend towards increased working time," the WHO said.

Researchers said that 72% of the victims of overwork in 2016 were men, mostly middle-aged or older. It also showed that people living in Southeast Asia and the Western Pacific region were most affected. Often, the workers died much later in life, sometimes decades after the shifts were worked.

WHO staff, including Ghebreyesus, say they have been working longer hours during the pandemic. Capping hours would be beneficial for employers since that has been shown to increase worker productivity, WHO technical officer Frank Pega said.

"It's really a smart choice not to increase long working hours in an economic crisis," he said.