Death, Violence and a Leading Culture

DW-WORLD readers this week commented on a variety of issues: EU opposition to the death penalty, domestic violence in Spain and Germany's debate about a "leading culture." 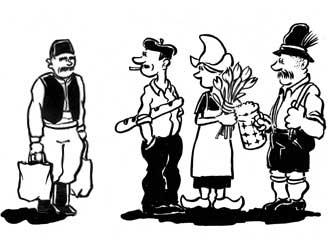 I am, and almost always have been, strongly opposed to the death penalty. But there was a time when I was put to the test regarding my beliefs. A friend of mine, a state trooper, was killed in the line of duty. While I was in the throes of grief I truly wanted the man who killed him to be executed. Thankfully, that didn't happen. Now that I have had time to put things in perspective, I once again take the stand against the death penalty. Taking the life of another human being lowers us and our government to being no better than the murderers we convict. It is upon us to respect all human life, even the life of those who have done horrendous things. It is the only way we can heal our world. -- Paige Sinclair 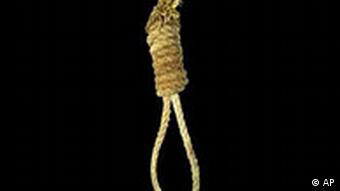 I am a big proponent of the death penalty. In Texas, we do two to four per month. The death penalty is effective in reducing violent crime and keeps un-rehabilitative criminals off of the streets and off our tax dollars for confining them in prison. Try it, you might just like it Europe! -- Houston Farris

I am completely opposed to this cruel and barbaric practice. There is only one circumstance under which I can see a justification for the taking of another human life, and that is for self-defense. I find it very strange and shameful that we in the US cannot learn to live beyond the idea of an eye for an eye and a tooth for a tooth. This produces blind and toothless people, and in the case of the death penalty, tragically, the loss of life. -- Louis Alexander

I'm strongly in favor of the death penalty. If you abolish the death penalty that means a person can kill as many people as they wish without fear of any real punishment. -- Frank Shipp, USA

I think it is great that an electronic tagging system is being introduced in Spain. Being from a Hispanic background, I am familiar with the macho image Hispanic men have and think they can hit a woman with no accountability. It was about time this has been implemented. Bravo! -- Jeannette A. Avellan, USA 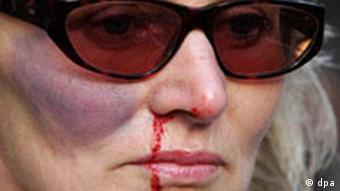 A woman wearing make-up to make her look like she has been beaten during a demonstration against violence against women in Germany.

It is a practical method to protect women from losing their lives, but what about if (the perpetrator) does not wear it? Also I think someone with such a criminal mind will not be hindered from committing his crime. The time factor plays a big role -- the time between the police receiving the signal and moving to the location of the aggressor is crucial. -- Lara

If we would work together to improve people's life, to enjoy the life, to respect each other as humans it wouldn't matter where we live. Most of the people who live in foreign countries love most their origin, their culture, and this is something more than natural. But they also have to consider that their co-patriots (the Germans) are also very fond of their customs, habitudes and convictions. Finally, every culture has its beauty as it rises from people's hearts and defines a person, a nation. We are different and this makes the world more beautiful and leads us to knowledge and fulfilment. -- Ramona Maria, Romania

The Muslim communities cannot be required to assimilate into a German Leitkultur and this forced assimilation is contrary to the UN human rights conventions for minorities. Muslim minorities should better integrate into the German society by learning the language and obtaining higher education. However, Muslims have the complete right to nurture their religious, cultural and linguistic beliefs. In fact, I find it funny that many EU countries require from Turkey to fully emancipate the minorities (e.g. Christians) in Turkey by providing multi-lingual, religious and cultural education and training. At the same time, the same EU states are growing more and more restrictive concerning the rights of their own minorities. -- Atilla A. Iftikhar

The EU begins hosting a three-day seminar on the death penalty in Vietnam on Wednesday. Part of the EU's effort to abolish the death penalty around the world, the event may signal that its efforts are paying off. (Nov. 24, 2004)

Around 100 women are killed by their current or ex-partners in Spain each year. The Spanish authorities have recently cracked down on domestic crime with increased awareness, new laws and soon electronic tagging. (Nov. 18, 2004)