Death plunge in Siberia as bus skids onto frozen river

Witness video of the bus showed it upside down on the frozen Kuenga River after plunging off a bridge. At least 19 people were killed. 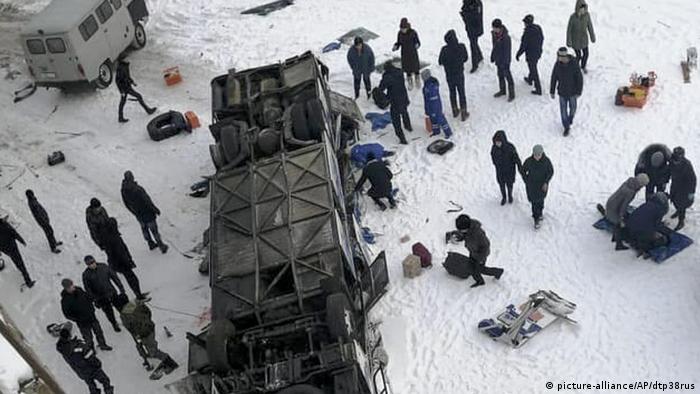 A passenger bus plunged off a bridge onto a frozen river in Siberia on Sunday, killing 19 people and injuring 21 more, officials said.

The bus skidded off the road after the front wheel failed while crossing a bridge over the Kuenga River in eastern Siberia's Zabaikalsky region, according to an initial investigation by the Emergencies Ministry.

Two helicopters with medics were sent to the scene.

The vehicle was traveling from Sretensk to Chita in subfreezing morning temperatures when the accident occurred near the borders with China and Mongolia.

Russia's Investigative Committee said it had opened a criminal inquiry into a possible violation of traffic safety rules.

Russia has one of the world's worst road safety records. Last year, 18,214 people died in road accidents, according to police numbers.

Many accidents are due to alcohol use, poor roads and failure to observe traffic rules.

A gas cylinder exploded and prompted a fire in a Siberian research facility which houses samples of smallpox, SARS, Ebola and other potentially deadly viruses. Russian officials said there was no threat of contamination. (17.09.2019)

Called the "frozen dragon of the north," a new species of flying dinosaur, Cryodrakon boreas, has been discovered in Canada. The pterosaur is thought to have had the wingspan of a small airplane. (11.09.2019)

A man in Siberia has found a mass grave in his garden. The dead are victims of Stalin's purges in the 1930s, but authorities now will have nothing to do with it. Russia still finds it hard to come to terms with its past. (30.10.2019)