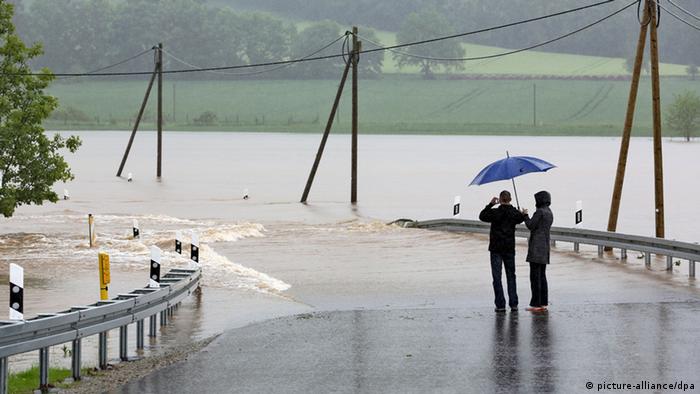 States of emergency were declared in Germany Sunday as residents evacuated areas with overflowing rivers in the east and south. At least four people are dead or missing in the country.

Chancellor Angela Merkel has promised her "full support" for the affected areas, which include the states of Saxony, Thuringia, Bavaria and Baden-Württemberg. Her spokesman said the military could be sent in to assist in relief efforts.

Several cities, including Chemnitz in the east and Passau and Rosenheim in the south, have issued disaster warnings. The historic center of Passau, where three rivers converge, was also underwater Sunday.

The floods are the worst in the region since 2002, which were then described as a "once-in-a-century event." Passau Mayor Jürgen Dupper said waters could yet rise above those levels.

Residents in the eastern cities of Greiz, Zwickau and Grimma were evacuated and the state environment ministry said further rainfall was expected in Saxony.

Shipping was halted on extensive stretches of the Rhine, Main and Neckar rivers, while rail services between Munich and the Austrian city of Salzburg were also suspended.

"We only expect waters to peak on June 4," a spokesman for the Rhineland-Palatinate flood warning center told the DPA news agency. "Until then, levels will continue to rise."

In the Czech Republic two people were killed Sunday when their summer cottage collapsed in the raging water. Three people are also missing on two rivers in Bohemia and the government has declared a state of emergency.

Czech officials said levels on the Vltava river could reach critical levels in Prague and that special metal walls were being erected to prevent flooding. Main roads and train lines were also shut down in the country, including a major rail route connecting Prague and the east of the country.

Some 300 soldiers have been deployed to aid local authorities and a further 2,000 have been put on standby, Czech Prime Minister Petr Necas said.

"We will do everything to protect people's lives and health," Necas said. "Tonight and tomorrow will be critical."

Train lines in many parts of northwest Austria were suspended Sunday due to landslides, Austrian Rail said. The town of Ettenau was evacuated, while one person in St Johann in Pongau near Salzburg was caught in a mudslide and died.

In just two days, Austria has experienced as much rain as it normally would in two months, the Austrian meteorological center ZAMG said.

Meanwhile one section of a Swiss motorway was shut down due to flooding, along with many smaller roads throughout the country. Swiss officials said water levels were still rising and landslides remained a risk, although the general situation was under control.

Bone dry ground in southern Germany and Austria was unable to absorb heavy rains as they finally fell overnight. In other parts of Germany, the wait for promised and plentiful precipitation continued.