Deadly clashes in eastern Ukraine ahead of Crimea referendum

At least two people have been killed during clashes in eastern Ukraine. It comes one day before a referendum on whether the Crimea region will break away and join Russia. 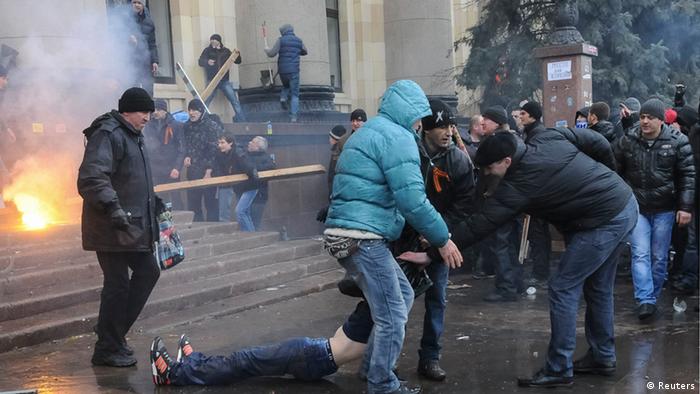 The fighting happened overnight in the city of Kharkiv between pro-Kyiv and pro-Moscow activists, killing two and injuring one policeman.

Ukraine's acting interior minister, Arsen Avakhov, wrote on his official Facebook page early on Saturday that police arrested about 30 people "from both sides of the conflict" and also seized weapons.

Avakhov said the incident was under investigation. Kharkiv has seen similar protests over the past few weeks (seen above).

There are fears that the upheaval from Moscow's military intervention in Crimea and Sunday's referendum on whether the region will join Russia could spread to Ukraine's Russia-leaning eastern parts.

On Thursday, at least one person was stabbed and killed in the eastern city of Donetsk, when pro-Kyiv demonstrators were allegedly attacked by a pro-Russia group. Sixteen people were wounded in those clashes, 13 receiving serious injuries.

"You know as well as we do who is organizing mass protests in eastern Ukraine - it is Kremlin agents who are organizing and funding them, who are causing people to be murdered," Turchinov said in an address to parliament on Saturday.

The United States and European Union have threatened sanctions against the Russian government if the Crimean vote goes ahead. Hopes that a solution could be worked out on Friday between the top diplomats of the US and Russia also faded.

"We have no common vision of the situation. Differences remain," said Russian Foreign Minister Sergei Lavrov, speaking after talks in London with US Secretary of State John Kerry.